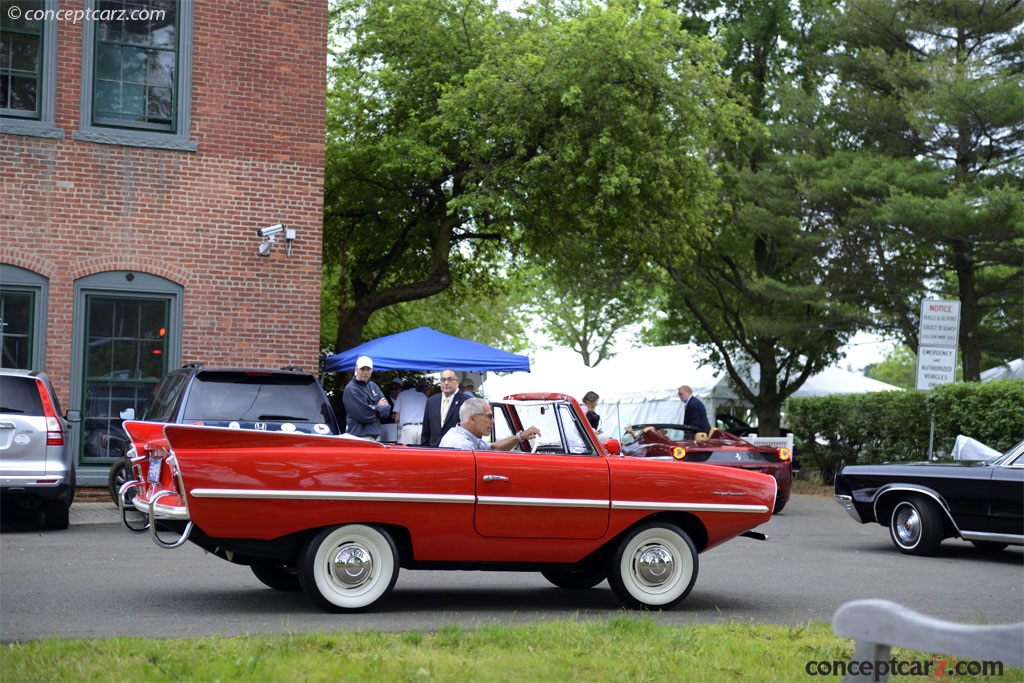 The Amphicar is both a land and water traveling vehicle. It was produced from 1962 through 1967 during which around 4500 examples were produced with most going to the United States. The vehicles were produced in Germany and borrowed many components from European automobile manufacturers. The engine, located in the rear, is courtesy of the Triumph Herald. The 1147 cc power-plant produces nearly 45 horsepower to the rear wheels and can propel the vehicle to a top speed of 70 mph on land and 6-8 knots in the water. The transmission and some of the fuel system components came from Porsche while the suspension and braking system came from Mercedes. The chassis is made of steel, just as most regular vehicles. However, the steel is much thicker and great care was given to the assembly and to the joins to keep them leakproof. Around the doors, rubber strips were fitted to create a water-tight seal, much like the opening and closing of a refrigerator. The tires are very narrow and the vehicle has been raised, offering excellent ground clearance. Propellers are located in the rear, underneath the vehicle which drives the vehicle while in the water. Steering, both on the road and in water, is controlled by the front wheels.

Designing the vehicle took an estimated five million dollars. Even though it was only produced for five years, it did accomplish something that has not yet been duplicated: the production of a commercial, non-military, amphibian car. Other non-military designs have been created for travel on land and water, but none have been able to mass-produce the vehicle in quantities that the Amphicar was able to achieve.

The Amphicar has traveled many historic adventures such as England to France and Africa to Spain, although most of the time they have been used for recreational purposes on lakes. Two licenses are often required, one for land and one for water. Amphicar's have been featured in many TV shows and movies from the early 1960's through the later 1990's.

The demise of the Amphicar was its high sticker price and poor marketing.
By Daniel Vaughan | Sep 2006

The Amphicar Model 770 is an amphibious automobile. It was manufactured in West Germany and marketed in the United States from 1961 through 1967, with its debut being made at the 1961 New York Auto Show. It was designed by Hanns Trippel and manufactu....[continue reading]