Chrysler Nassau Concept: Artistic, Refined Definition of 'What It Is to Be a Chrysler'

Detroit, Jan 8, 2007 - Combining refinement, function and style, the Chrysler Nassau concept explores a new expression of the Chrysler brand. The four-door, four-passenger Chrysler Nassau luxury coupe is, as Alan Barrington, principal exterior designer of the concept said, 'a more emotional and artistic articulation of what it means to be a Chrysler.
Though built on a full-size 120-inch wheelbase, the Nassau appears more visually compact than a comparable Chrysler 300C.

'Traditional exterior proportions have been enhanced with a silhouette that recalls the classic English ‘shooting brake,'' said Barrington. 'This provides SÚV-like interior volume with a lower, more roadworthy physique.'

Barrington said the exterior design vocabulary is fluid and sophisticated with special attention paid to wheel placement relative to the body surface for a sleek, toned stance. 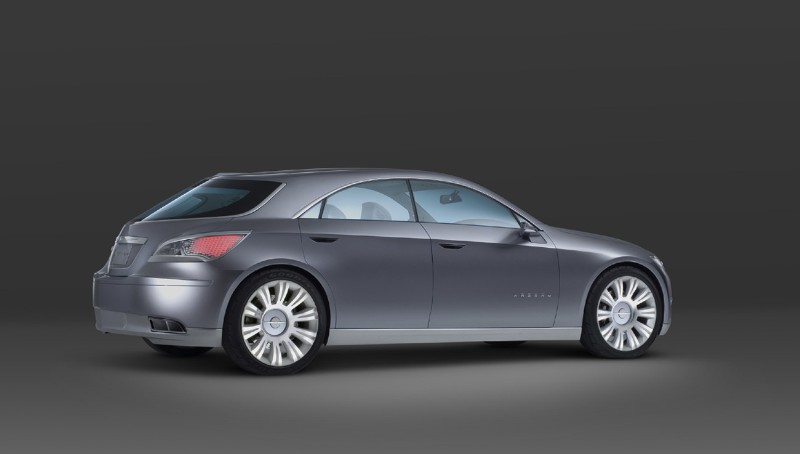 'In order to attain a more compact appearance,' explained Barrington, 'the Nassau has deliberately concise front and rear overhangs, with the body surface wrapped around the large 10-spoke 21-inch wheels.'

Accenting the Mystic Blue Pearl color of the body, the sill and the lower portions of the front and rear fascias are finished in Starbright Silver. The lower surface of the body is defined by a subtle undercut that rises slightly toward the rear wheel.

Though the arc of the roof resembles that of a coupe, the Chrysler Nassau concept is in fact a four-door hard top with front and rear side glass that retracts fully, revealing the absence of an above-the-belt B-pillar. The crisp but fluid A-line that closes slightly against the rising belt is also of particular note.

'We sought to capture the effect of a classic sculpture — an artistic approach with a shapely flowing of lines that give the impression of movement even while standing still,' Barrington §äid. 'The line in the profile draws down and into the taillamp, leading the eye of the observer toward to the dramatic back end which creates its unexpected ‘shooting brake' appearance.'

In side view, the upper portion of the rear hatch is steeply raked, with the back light swept cleanly around to the C-pillars. The lower portion of the tapering back light glass is pulled emphatically rearward, a treatment repeated in the near vertical surface of the lower hatch. The flanking taillamps are graphically the reverse of the headlamps, with the lenses growing wider as they sweep around to the side, with the bright accent along the bottom of the lens. Much of the lens is populated by rows of bright rectangles set in a red field, the rectangles helping to delineate the surface of the rear quarters when the lamps are unlit. All exterior lighting is visually distinctive with the use of atypical textures, colors and LED technology.

Vital Stats
Engine : 6.1 L., 8-cylinder
Power: 425 hp
Torque: 420 ft-lbs
5-speed Automatic
Fronting the long hood is a new interpretation of the eggcrate Chrysler grille, rendered in chrome and satin aluminum. Bracketing the grille and sweeping rearward nearly to the wheel openings, the long, narrowing headlamps and their upper chrome brows combine with the rising sculptured line of the upper fascia to subliminally evoke the uplifted wings of the Chrysler badge.

The Chrysler Nassau's lower fascia is accented by the long chrome brows of the tapering left and right fog lamps, a detail replicated in the 'repeater lamps' of the slim, door-mounted side view mirrors. The plan view of the Nassau highlights the dramatic swept-back curves that define both the front and rear fascias. 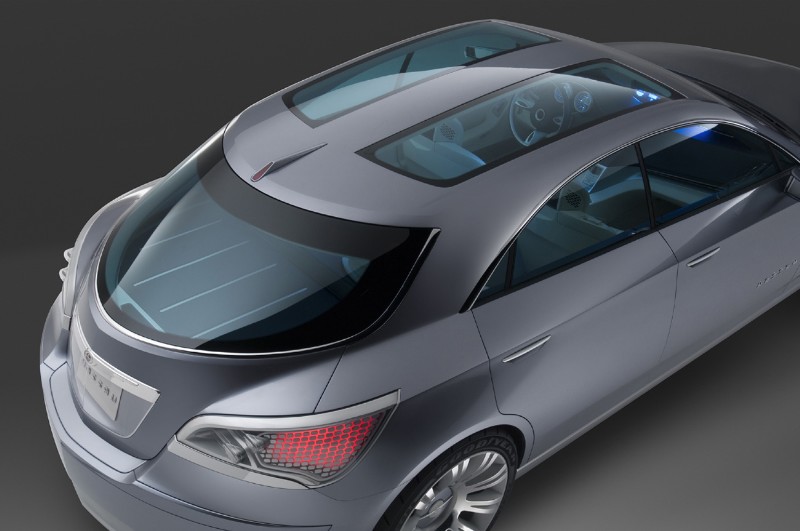 Stepping into the Chrysler Nassau, one enters a new world of luxury specially designed to a younger, aspiring audience. The presiding interior theme is one of flowing seamless sculpture composed of leathers and fabrics derived from futuristic architectural interiors.

'We looked carefully at space efficiency,' said Ben Chang, principal designer of the Nassau's luxurious interior. 'We pushed the interior surfaces outboard to increase the space inside while individual bucket seating provides each of the four occupants personal space.

'The look of various components inside the vehicle was inspired by the design of contemporary cell phones, computers, iPods and MP3 players,' Chang added. 'We paid close attention to the graphics and finishes of these technologically advanced products, seeking to make controls in the Nassau's interior that the driver interfaces with similar to what you'd find in the office or among personal electronic devices. We strived to achieve a seamless interface between your car and the rest of your electronic world.'

The instrument panel is a showcase for new technologies in data display, personal control interface, and home theater-inspired entertainment. Gear selection is accomplished via a pod control mounted on the instrument panel while the steering wheel incorporates auxiliary paddle shifters.

'The look of the instrument cluster was based on an expensive watch, again because we sought to create a visible connection with what people have and use,' Chang §äid. 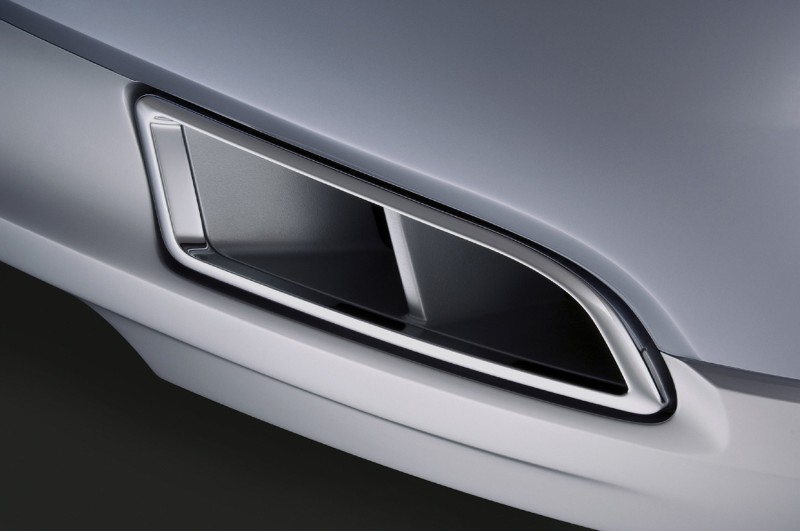 While the instrument cluster has its own taut brow, the shape of the forward portion of the instrument panel is sensuously sculpted. Housing the main cluster, the upper surface of the panel includes a wide asymmetrical elliptical opening.

The shape was inspired and reminiscent of Constantin Brancusi's famous Bird in Space sculptures. Brancusi, an artist based in Paris from the 1920s to the 1940s, was preoccupied by physical attributes of birds in flight, or more specifically, the essence of flight. The theme fits perfectly with the vehicle's goal of giving the constant impression of smooth, slender movement.

Within the housing of the instrument panel (I/P) is a three-layer screen, which allows the simultaneous display of the navigation, passenger entertainment and vehicle function displays.

As they move toward the doors, the left and right side lower portions of the two-tone I/P rise upward, again subtly reprising the Chrysler wings. Sandwiched between the upper and lower surfaces of the instrument panel are partially-concealed horizontal vents that direct cool air into the cabin.

The four handsomely-formed bucket seats are covered in cream-colored leather, with the suede accents in a fine bamboo texture, a theme repeated on the door trim panels. Occupants can gaze upward through twin 'Picture View' skylights, longitudinal blue-tinted glass panels that run the length of the roof panel. Those in the rear seats can enjoy a movie displayed on the flush video screens incorporated into the rear-facing portion of each of the front seat headrests.

Running fore-aft between the seats is a center console with a satin silver trim strip that travels from the I/P center stack to the upper rear seat backs. Set within the console are the front and rear 'joy stick' controls designed to function much like the 'mouse' control of a home or office computer. Power window switches and flush-mounted pop-up cup holders are also contained in the console.

Among the more interesting visual details within the Deep Mystic Blue and Cream interior are the refined-yet-simple chrome accents and textures used on the silver speaker grilles on the doors, seat back monitors, headliner and foot pedals.

Behind the passenger cabin, the surface of the boat tail-shaped cargo cover is accented with five stainless steel accent strips, while panels in the carpeted cargo area below offer additional storage.

'With its sculptural artistry and technological sophistication, the interior of the Chrysler Nassau is the perfect complement to its visually-arresting exterior,' said Chang.Source - Chrysler 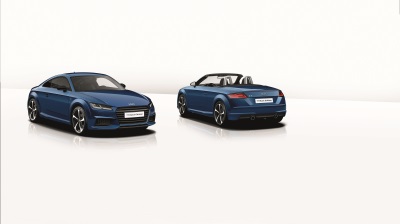 NEW VERSIONS OF AUDI RANGE STARS REVEAL THEIR DARKER SIDE

Audi momentum continues with multiple new and freshened models for the 2014 Model Year The introduction of the Audi RS 7, SQ5,expansion of the R8 model line, and the addition of four new TDI® clean diesel models highlights a robust choice of new...
© 1998-2020. All rights reserved. The material may not be published, broadcast, rewritten, or redistributed.