The British racing car constructor, March Engineering, is well known for their Formula One automobiles though the company's greatest success was in other series, such as Formula 2 and Formula 3. The name 'March' was formed by its founders, Max Mosley, Alan Rees, Graham Coaker and Robin Herd. The company was formed in 1969 with their first vehicle being a Formula 3 car. A year later the 701 chassis was introduced and intended for F1 competition. Frank Costin aided in the creation of the 711 chassis which was shown a year later. The March 83S was a Sports 2000 racer of which eight were created. They were very similar to the 82S which was basically an 81S with minor updates. They 81S had been based on the 5-liter 811 which had been constructed for Formula One comeptition. The 81S had a Monocoque chassis and a Ford 2-liter engine. The gearbox was a Hewland MK9 unit.
By Daniel Vaughan | Jan 2007 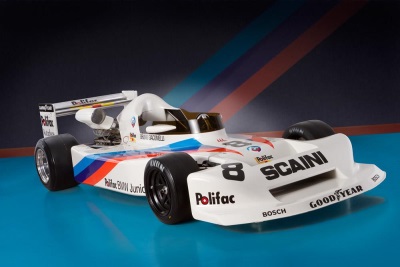 Cars International were out testing at Silverstone on Friday, shaking down the Munich based Museums 1978 March BMW 782, which has recently undergone a full restoration, before it makes its debut at the Goodwood Festival of Speed. Cars International,...