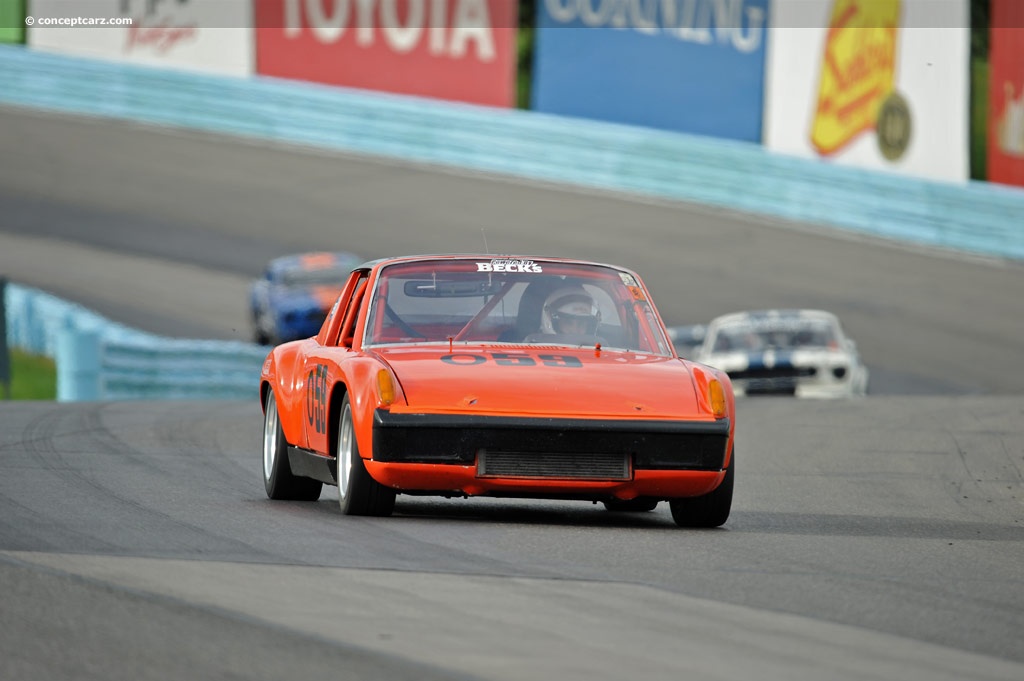 The Porsche 914 was introduced in September of 1969 as a collaborative effort between Porsche and Volkswagen to produce a sporty car. The car they came up with was a mid-engined vehicle with seating for two and featured a Targa top. A 4-cylinder boxer engine provided the power. Volkswagen needed a vehicle to replace the aging Karmann-Ghia while Porsche was looking for another option to add to their line up. The VW bodied vehicles were known as 914/4S while the Porsche variants were known as 914/6s. However, all 914S's sold in North America were considered Porsches.

The car sits very low and the suspension is stiff making it a great competition car rather than a touring car. The headlights hide in the hood and pop-up when needed. The Targa top can be stored in the trunk.

The 914/6 was short-lived with only 3360 examples produced between 1970 and 1972. All featured the 2.0-liter flat-six engine. It was raced using different engine configurations. This included the 'T' specification, which was basically a stock 911 engine. Another popular configuration was to use a converted Carrera 6 engine.

In 1970 Porsche entered a 914/6 GT in the grueling 24-hours of Le Mans race. It finished 6th overall and won its class. A remarkable accomplishment. This was only one chapter in the vehicle's extensive racing career which continues even to this day.
By Daniel Vaughan | Jan 2007Just happening to be the cheapest modern Porsche one could buy, the Porsche 914 debuted with a low price point to attract buyers. When first introduced at the Frankfurt Automobile Show in September of 1969, the Porsche 914 was a return to Porsche's roots. The 914 was a much more affordable Volkswagen-based sports vehicle that was conceived to bring the pride and pleasure of owning a Porsche to a wider audience than before.

Near the end of the 1960's, both Porsche and Volkswagen were searching for new models. Porsche needed a new model to replace their entry-level 912 and Volkswagen was seeking a new range-topping sports coupe that could replace the aging Karmann Ghia. To fulfill their contract, Volkswagen needed to contract out one final project and the mid-engined 914 Porsche was this project. The head of this project was Ferdinand Piëch, a designer in charge of research and development at Porsche. The 914 with seating for two, featured a Targa top, and was sold collaboratively by Porsche and Volkswagen from 1969 through 1976.

The 914 was originally intended to be sold with a flat four-cylinder engine as a Volkswagen and carrying the flat six-cylinder engine as a Porsche, Porsche was able to convince Volkswagen to sell both versions as Porsches in North America. The Porsche 914 sat very low and had a stiff suspension which made it a great competition vehicle instead of a touring car. The Targa top can be stored in the trunk, and the headlights hide in the hood and could be popped-up when needed.

The first 914 Prototype was introduced on March 1st, 1968. Unfortunately, the death of Heinz Hordhoff, the chairman of Volkswagen complicated the development as his successor Kurt Lotz chose not to be tied within the verbal agreement between Porsche and Volkswagen. Lotz believed that Porsche had no claim at all to the model, and Volkswagen claimed all, especially when Porsche would not share in tooling expenses.

All of this resulted in the price of the chassis rising considerably and the 914/6 costing only slightly less than the 911T, Porsche's next lowest-priced vehicle. Sales were dramatically affected, and the 914/6 did not sell well. The less expensive 914-4 became Porsche's top seller during its run and managed to outsell the 911 very easily, with a total of 118,000 vehicles sold worldwide.

Taking the idea from the 1969 911T, the 914/6 variant featured a carbureted 110 hp 2.0 L flat-6 engine, while Volkswagen versions originally came with an 80 hp fuel-injected 1.7 L flat-4 engine that was based on the Volkswagen's air-cooled engine. The 914's engine was placed in the middle, in front of a version of the 1969 911's '901' gearbox, so it was set up for mid-engine operation. The rolling chassis was manufactured by Karmann at his own plant, and then either sent them to Porsche for fitment of the Porsche suspension and flat-six engine, or they were kept in-house for Volkswagen hardware. The brakes and suspension used in 914/6 models were very similar to the Porsche 911.

A joint venture between Volkswagen and Porsche in the beginning, export to the U.S. was taken care of by Volkswagen of America, where both versions were sold and badged as Porsches. The four-cylinder vehicles were sold as Volkswagen- Porsches in Europe, at Volkswagen dealerships.

From 1970 through 1972 the 914 models featured both front and rear bumpers that were flat across and were available in either painted metal or chrome. For 1973 the vehicle received new bumpers stops, and for the following year, bumper stops were also added to the rear of the vehicle. The bumpers were heavy and rubber covered from 1975 through 1976.

Unfortunately, the 914/6 variants were discontinued in 1972 due to rising costs and very slow sales. A total of 3,360 units were produced during its cycle. In 1973 a brand new 95 hp 2.0L, fuel-injected version of the Volkswagen's Type 4 engine replaced the 914/6. The following year, the 1.7 L engine was replaced by a 76 hp 1.8 L. To aid with emissions control, the new Bosch L-Jetronic fuel injection system was added to American units. Production for the 914 ended in 1976 and the 2.0 L flat-4 engine continued to be used in the 912E, which was the entry-level model until the 924 was introduced.

For 1970, the Porsche 914 was named Motor Trend's Import Car of the Year. Finishing sixth overall at the '70 24 Hours of Le Mans, a 914/6 GT piloted by Claude Ballot-Lena and Guy Chasseuil won the GTS class.

Several special edition models of the Porsche 914 were created over the years. Nearly 500 models of the Creamsicle 914 were created; a light ivory-based color scheme concept, basically a carryover from the '73 911 Carrera RS series car design precedent. 500 Bumblebee models were produced. The Bumblebee featured a black exterior with yellow decals, bumpers, skirts, and wheels.By Jessica Donaldson

This Porsche 914-6 was completed in May of 1970 with European delivery equipment and delivered to Finland. However, within a few months, the car was delivered to Dr. Van Del Rex, M.D., in Phoenix, Arizona. Until the acquisition by the current owner, ....[continue reading]