John Surtees was one of the three UK manufacturers along with Lola and McLaren to construct cars for the first year of UK Formula 5000 racing. Len Terry, who also designed F1 winning cars for Jim Clark and Dan Gurney, designed the TS-5.Surtees employed David Hobbs to drive the works car, and after having shown great promise during the early part of the season, Hobbs went to the United States with the TS-5 and continue with his success. He finished second in the U.S. championship having run only half of the races.In 1969 this chassis was driven by David Hobbs and Trevor Taylor in four of the European rounds, then shipped to America and driven by Andrea de Adamich in four rounds of the U.S. championship. Sold by the team before the end of the season this car competed at Sebring in the final round driven by Hamilton Vose III.
Originally, James Garner star of the movie Grand Prix planned to run a two-car team in the United States to be powered by AMC engines. The engine deal fell through and in the end he ended up running one car driven by Scooter Patrick with Chevrolet power.
The Surtees TS-5 proved to be the most successful car of the 1969 Formula 5000 season.This car changed hands a few times until purchased by Howie Fairbanks who raced the car until the late 1970s. It was purchased by its current owner in 2004 and restored to original specifications. It has been raced in vintage events since 2008.
There were five examples of the Surtees TS5 constructed with two being driven by Team Surtees Works drivers. The car was a Len Terry designed racer initially commissioned by Roger Nathan for Formula 5000 competition. The project later fell into the hands of James Garner's AIR team who were searching for a suitable racer to be used in the US Formula A Series. A deal was struck with John Surtees to take over the construction of the project. The first four cars were constructed at Len Terry's Design Auto whorskop and the following cars were at Surtees workshop. Two of the cars were raced by Garner in the US series. The team consisted of David Hobbs and Scooter Patrick. The engines were initially intended to be AMC units, though they took longer than anticipated to construct. When the first two cars arrived, they were given Chevrolet V8 units. The cars were dubbed the TS5, possibly after the initials of Terry Surtees, with the 5 representing 'Formula 5000'. When the Chevy Powered TS5 Formula A cars were ready for testing, they were brought to Riverside. Scooter Patrick and Dave Jordan were given the pleasure of running the cars through their paces. The testing session was cut short when both of the cars suffered suspension failures. John Crean, Garner's partner, decided to terminate the relationship with Surtees and sought-out Dan Gurney to construct Eagles as a replacement.
By this time, AMC decided to terminate their agreement for engine obligations. Surtees decided to run two cars in the UK and two in the US as Team Surtees entries. After the cars proved their capabilities as Works Racers, customers began inquiring about ordering the Surtees TS5. The TS5 was later put into production with the first sale going to Mike Goth who purchased the fifth car. Two more requests for the cars came in and the orders were satisfied by supplying the US Works Cars. One of the purchasers was Garner who had left AIR in 1969 and ran a TS5 for Scooter Patrick.
The example shown, bearing number 151 (often wearing number 15) is believed to be a Surtees TS5/A. It is known as 'the Gallucci-Harmer car.' The car was owned by Jim Gallucci for a number of years and later sold to Mark Harmer, the cars two most recent owners. The TS5A models were constructed in the very early 1970s and had minor modifications over the original TS5 models. Modifications included suspension, gearbox, fuel and oil system, and brakes. Only nine examples of the TS5A's were constructed.
By Daniel Vaughan | Jan 2007 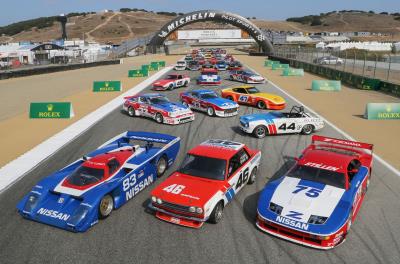 Fresh from planting 100,000 new bulbs to join the host of golden daffodils that will flutter and dance around the Goodwood Motor Circuit next spring, the Goodwood Team is thrilled to reveal the races that will make up the 76th Members Meeting programme...

Total 1969 Surtees TS5A production: 0
© 1998-2021. All rights reserved. The material may not be published, broadcast, rewritten, or redistributed.