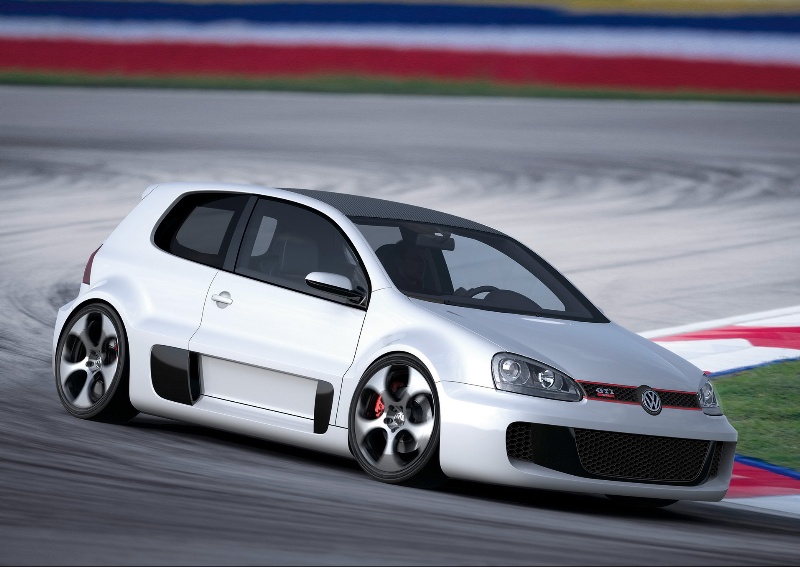 • W12 bi-turbo engine with 6.0 liter displacement and 750 Nm torque • 325 km/h fast showcar sprints to 100 km/h in 3.7 seconds Wolfsburg, 17 May 2007 - Daring to create something unique, leaving conventions behind and awakening passion – these have been at the heart of the GTI concept since its inception. To date, more than 1.67 million car drivers have fallen under its charm. The Golf GTI has been an icon for a long time now. A brand in itself. A label of sportiness. To drive a GTI is to make a statement; across the globe. Since 1982, its greatest fans have been celebrating it every year at the Wörthersee in the Austrian state of Kärnten. Thousands come for this event. Five days of Mardi Gras in May. For this occasion, Volkswagen has put a Golf on wheels that is like no other: The GTI W12-650 showcar. This sports car is a tribute to our GTI friends at the Wörthersee, car fans who made the GTI a legend. It is a concept that was designed just for them.No Golf has ever been more powerful, or wider, or faster. The GTI W12-650 gives the appearance of having come directly from the racetrack. A Golf that could be the pace car for the 24 hour race at Le Mans. Its name is its mission: W12 cylinders, 650 PS (477 kW at 6,000 rpm). A showcar, no more, no less. At the same time it demonstrates the enormous potential that such a car can offer.3.7 seconds, 325 km/h, 750 Newton-meterIts 6.0-liter bi-turbo engine is longitudinally mounted directly behind the driver and front passenger. This transforms the GTI into a classic mid-engine sports car. A six-speed automatic transmission hammers the maximum torque of 750 Newton-meters (at 4,500 rpm) to the rear axle. It catapults the GTI to 100 km/h in just 3.7 seconds. The bi-turbo propels drivers who keep their foot to the gas pedal well beyond the 300 km/h barrier. The speedometer needle does not pause until it reaches 325 km/h. The Golf GTI W12-650 outpaces nearly all other cars of this world.1.88 meters wide, 235 tires in front, 295 in back 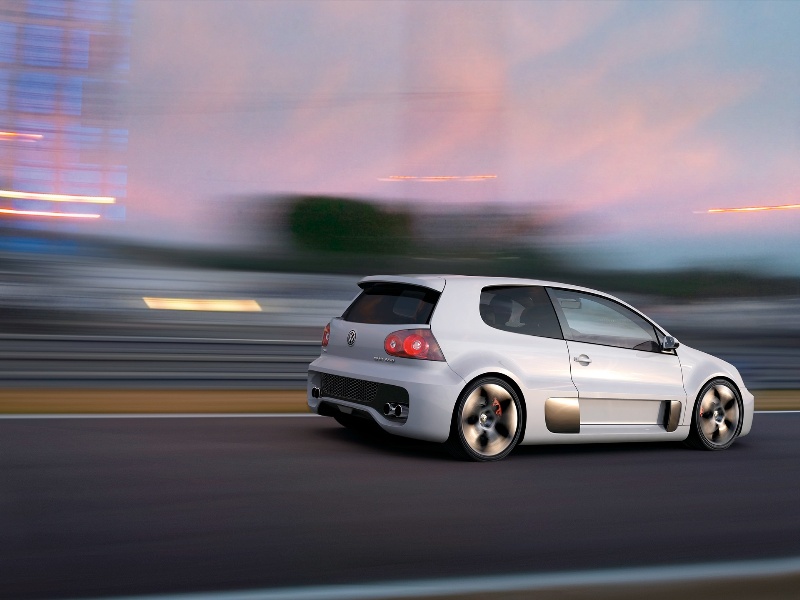 Únder the broad 1.88 meter (production 1.76 meter) width and low 1.42 meter (production: 1.50 Meter) height of its body, engineers and designers have brought together automotive technologies not seen in this combination on any other car. Each component is sourced internally. That in particular is a tribute to the unequaled breadth of technology at Volkswagen AG.
The chassis components of this showcar, for example, were adapted directly from a super sports car. Mounted on the front axle are 235 tires in 19-inch format, while in the rear there are 295 tires. Naturally, alloy wheels are also used: Due to the gigantic tire dimensions, the brightly machined 'Detroit' GTI wheels are 'dished' in the direction of the wheel hub and are custom built; the pitch circle with the wheel nuts lies much deeper than the rim circle.70 millimeters lower, 160 millimeters wider 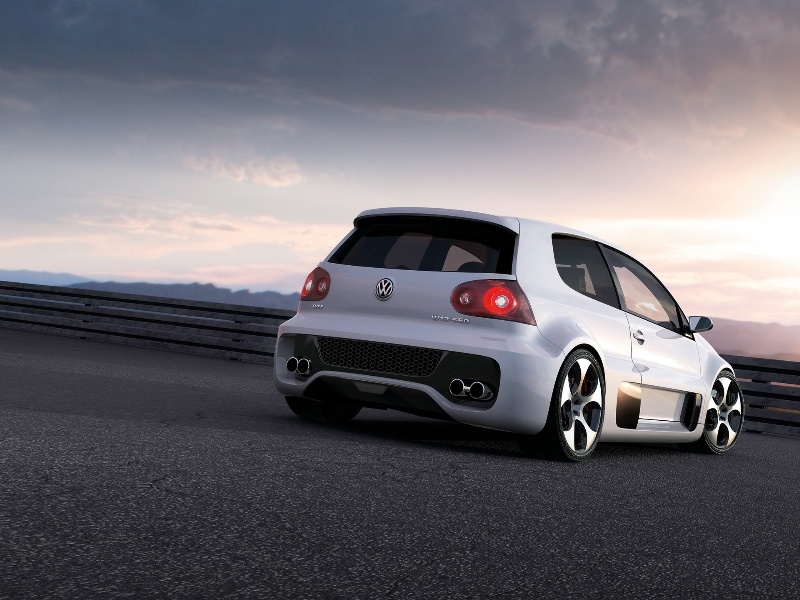 The axles were 'pushed' 70 millimeters further into the body; the wheel well cutouts and gigantic wheel arches are part of the shoulder section, as in a coupe. Klaus Bischoff, Director of Volkswagen Design: 'In the rear, the showcar is 80 millimeters wider on each side. However, the body of the GTI easily takes this in. We already have a strong shoulder section here on the production model. We were able to draw it outward even more distinctly, like on a sports car.'The chief designer continues: 'Our goal was clearly defined – despite the somewhat dramatic engineering changes, it was very clear that the GTI was to remain a classic GTI. The design of the Golf is like a fingerprint. If it is erased, the entire character of the car is ruined. That could not be allowed to happen under any circumstances.' That is also why as many components as possible, such as the headlamps, the doors – newly hung due to the wide side skirt – front hood and taillights were taken from the Golf.C-pillars as part of air duct for engine cooling 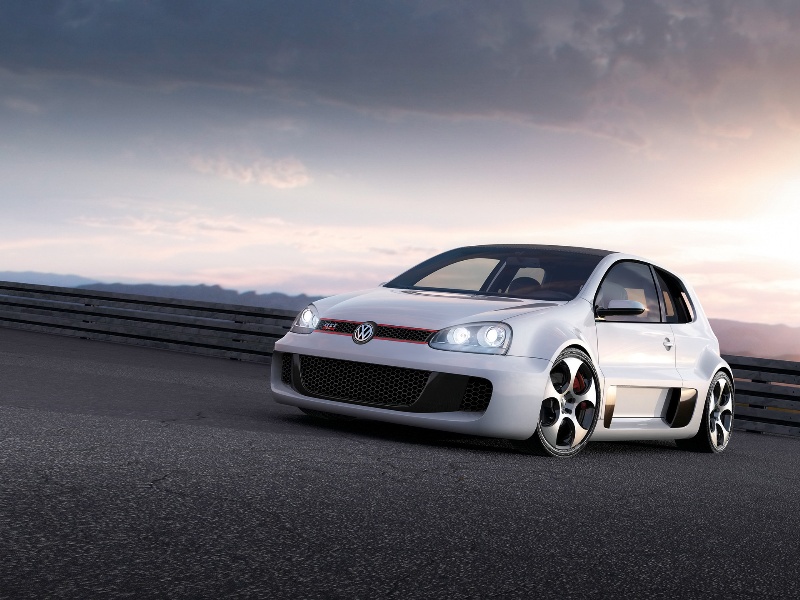 'Our greatest challenge', says Klaus Bischoff, 'was to provide the six-liter mid-engine with sufficient air, without watering down the GTI's side profile. In addition, provisions had to be made for sufficient downforce at the rear axle on such a fast type of car. But for aesthetic reasons we did not want to put an enormous rear spoiler on the car.'
In both cases a trick helped. Klaus Bischoff: 'The strongest Golf design elements are the C-pillars. But it is precisely here that we needed air ducts for engine cooling air. Therefore, the C-pillars were redesigned on short order to assume this function of routing air to the engine. In doing so, we simply made the rear windows turn inward. This created two ducts between the windows and the C pillars, on the left and right, through which air flows for engine cooling. We got the rest of the cooling air in front via the gigantic radiators and the ducts connected to them, as well as on the sides via air inlets on the side skirts.' Expressed differently: At first glance all parts of the rear section look like a production GTI, but it was actually redesigned intensively.Carbon-fiber roof is a diffuser

Innovative body construction has also prevented the lines of the GTI W12-650 from being ruined by a roof-mounted wing. Klaus Bischoff: 'This GTI carries its wing internally. The roof is part of an enormous diffuser that supplies sufficient downforce to the rear axle. It consists of a carbon-fiber material and directs the air over and under the rear spoiler to achieve road grip, like in car racing.'The bumpers of the showcar are powerful and at the same time coherently designed. In the rear, as in the front, the GTI W12-650 is characterized by enormous air inlets and outlets. Two dual chrome-plated tailpipes frame the air outlet in the rear. At the front of the car, the eye-catching straight-line grille between the headlamps, with its red frame, is reminiscent of the first GTI.Interior with racing ambitions

Every modern-day GTI driver would feel at home right away in this interior. The leather Alcantara covers for the race car bucket seats are newly designed. Three round gauges in the middle of the instrument cluster are also reminiscent of the original GTI. Details taken from car racing, on the other hand, include the transparent 'flip-up switch covers' for important functions such as ESP deactivation. To prevent accidental switch activations, the transparent covers are 'flipped up' with the index finger before activating the switch underneath. Another reference to car racing is the integrated fire extinguisher in place of a glove box. For weight reasons, the door trim was completely 'stripped'; only screens are used, which quite intentionally offer a view of the internal workings of the door mechanisms.Source - Volkswagen 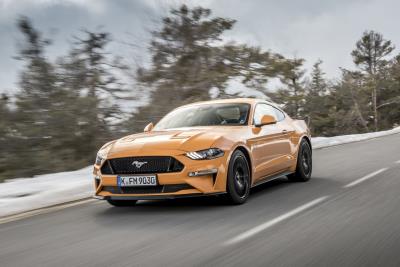 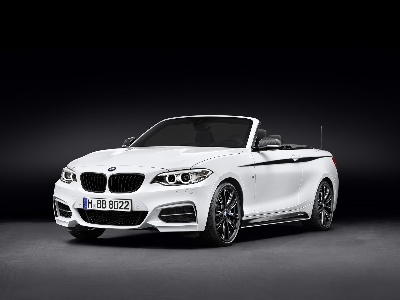 Munich. At BMW the letter M signals the presence of high performance and a very special brand of sporting allure. And now Original BMW Accessories from the M Performance range can be specified for the new BMW 2 Series Convertible, stylistic and...

DETROIT – The 2014 Buick Regal goes on sale later this year with a suggested retail price of %2430,615, including a %24925 destination charge. Standard equipment includes next-generation IntelliLink connectivity with an eight-inch color touch display,...
© 1998-2020. All rights reserved. The material may not be published, broadcast, rewritten, or redistributed.