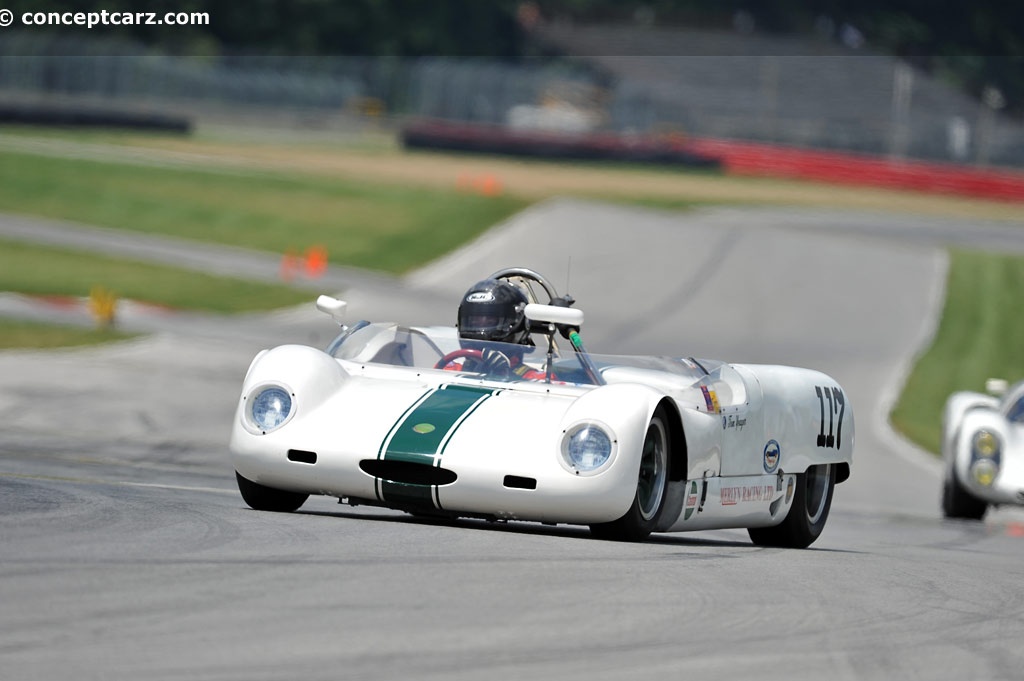 The first Merlyn racer ever constructed was a front-engined Formula Junior car built by Selwyn Hayward. Hayward enlisted help from a few of his friends, John Lewis, Jerry Simon and Richard Neale. On the racing circuit the car proved its potential and soon a production version was offered for sale. The prototype was constructed in 1960 with the second car, the MK2, coming available in 1961. The Cooper racing cars had proven to the world that the mid-engined placement was the superior configuration and soon many other marque's were following the design. Merlyn's first rear-engined car was the MK3 Formula Junior car. In 1962 the MK4 sports racing car was introduced and powered by a Ford 1100cc engine. The MK4 is now known as a Lotus 23 beater, was constructed from a multi-tubular spaceframe and clothed in all-aluminum or all-sheet metal bodywork. The front suspension was comprised of double wishbones, anti-roll bars, and Triumph uprights while the rear had lower wishbones, double trailing rods, anti-roll bar and a top link. Steering was by rack-and-pinion. There were four outboard disc brakes with alloy calipers. The aluminum wheels were both lightweight and strong, measuring 13 inches. The total package weighed around 460 kg. The engine, coming in various guise, was often mated to Hewland or VW gearboxes. The engine bays were designed to accommodate a Ford 1500 or Climax engine. Specifications and configurations varied. Many were raced in SCCA competition. The MK4A was a more evolved sports racer than its MK4 sibling, bringing with it a stiffer chassis and better handling. Three engines were offered, a Ford 1100cc, Coventry-Climax 1100cc or the 1598cc Lotus/Ford Twin-Cam unit. The Lotus/Ford unit was the most desirable due to its higher power and versatility. The bodies of the MK4A were fiberglass which was both structurally rigid and lightweight.
The next Merlyn Sports Car was the MK6, which was produced from 1964 through 1965. The MK6A was the next iteration, with a total of 12 being constructed. The popular engine was the BRM engine which had 180 horsepower at its disposal. The engine was mated to a five-speed gearbox and the entire vehicle weighed around 1300 pounds.
The MK5 was a rear-engined Formula Junior car built in 1963. Also built in 1964 was the MK7, a Formula 2 and Formula 3 car that had an inboard front suspension. The MK8 was built to accept large, V-Type engines. The MK9 of 1965, and the MK9A of 1966, was a Formula 2/Formula 3 car with . The MK10 was used in Formula 3 and Formula libre and featured an outboard front suspension. The design of the MK10 was used in creating the Formula Ford MK11.Merlyn had a rich racing history but they are most remembered for their Formula Ford cars. They were one of the earliest producers of racers for this series and soon they were outselling their competition. Tim Schenken navigated an MK11 to many racing successes which helped boost sales for the small and capable car. The MK11A brought with it many enhancements and refinements.Merlyn also created Formula Atlantic cars, Formula 3 and track midgets. Jim Russell purchased a number of the Series 17, 20 and 24 racers for his racing schools located in the US and the UK.In 1979, due to a number of circumstances, Merlyn ceased production of racers. Their final car was the MK31. CRD Tool and Engineering was later formed with most of the employees moving over to the new business.
By Daniel Vaughan | Jun 2007

Total 1963 Merlyn MK6A production: 0
© 1998-2020. All rights reserved. The material may not be published, broadcast, rewritten, or redistributed.