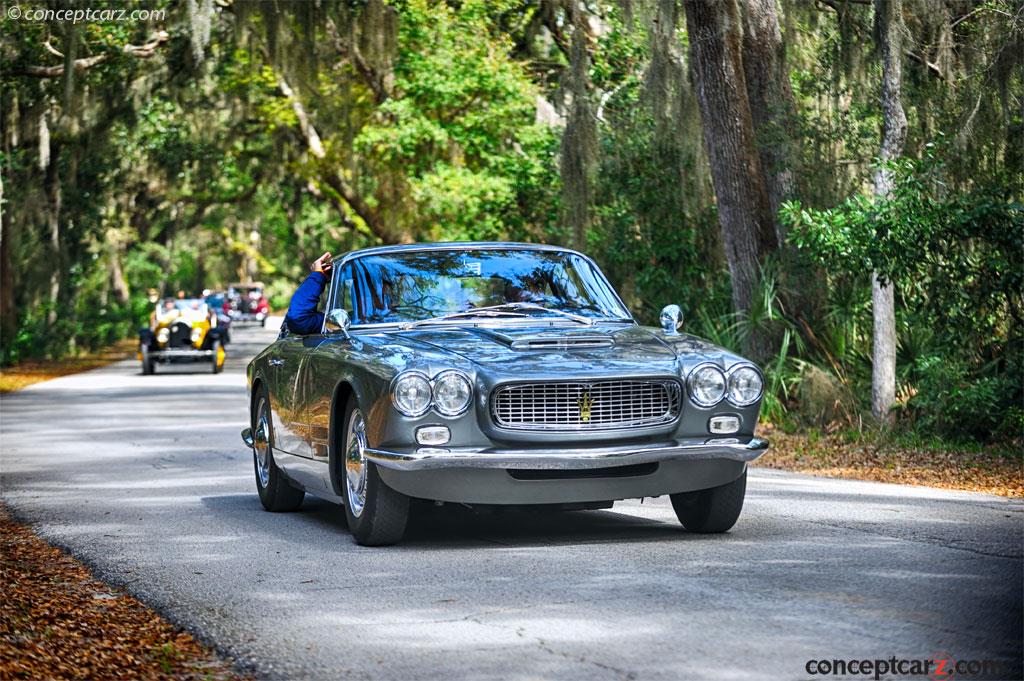 The Maserati Sebring was produced from 1963 through 1969. The name 'Sebring' was used to honor the victories Maserati had earned at the prestigious 12 Hours of Sebring race. The 2+2 coupe design was courtesy of Alfredo Vignale who had also created the prior Maserati vehicle, the 3500GT. Both sat atop a shortened wheelbase and were designed for US market.

Under the hood was a six-cylinder 3485cc engine that was later upgraded to a 3694 cc unit. A five-speed ZF manual transmission drove the rear wheels while disc brakes provided the stopping power.

A prototype version of the Sebring Series I was introduced at the 1962 Geneva Motor Show. Production of the Series I lasted from 1963 through 1964. In 1965 the Series II was introduced which brought with it slight aesthetic improvements which brought the design more in-line with the Frua-designed Quattroporte. Under the hood a new 3.7-liter engine could be found that produced an astonishing 245 horsepower. This was later improved to 255 horsepower with a larger 4-liter engine.
By Daniel Vaughan | Jul 2007A 2+2 grand tourer coupe produced by Maserati, the rare and exotic Sebring was introduced in 1962 and produced through 1968. Heavily based on the Maserati 3500, the Sebring was primarily aimed at the profitable American Gran Turismo market and received its name following the 1957 racing victory at the 12 Hour race. Joining the aggressive-looking Sebring was a single two-seat spyder in 1963 that never entered production, also built by Alfredo Vignale.

Debuted at Salon International de l'Auto in 1962 in prototype form, the world received its first glimpse of the Series I (Tipo AM 101/S), and then again at the Salone dell'automobile di Torino the following year in its definitive form. The hand built Sebring was a roomy steel-bodied vehicle with a trunk and hood composed of aluminum that carried room in the rear for two smaller passengers. The Sebring design was a bit more angular than the 3500 and gave the vehicle a more compact look.

With an impressive top speed of 137 mph, the Sebring featured everything from the Maserati 3500, except for its coachwork, and could achieve 0-60 mph in just 8.5 seconds on 185x15 Pirelli Cinturato tires. New for the Italian cars, a Borg-Warner automatic transmission was offered for the first time. The standard Sebring was quite well equipped, but Maserati did offer many optional extras that included air conditioning, automatic transmission, tinted glass, a radio and special paintwork. Series 1 models left the factory with Pirelli Cinturato 205VR15 tires (CN72).

Between 1962 and 1965 a total of 348 Series 1 Sebring's were produced. In 1963 the engine was updated with an additional 15PS for a total of 235 PS (173 kW). The following year the 3700 engine was first introduced, though only a select few received this engine. All Maserati Sebrings were fitted with five-speed ZF gearboxes.

In 1965 the Maserati Sebring Series II (Tipo AM 101/10) was debuted. The new model featured newly redesigned headlamps, updated more modern bumpers, new turn signals at the front and new side grilles that took the place of the lower extraction vents. The Series II took its design cues from the contemporary Quattroporte. The trunk lid opening was narrowed slightly, the bumpers were now more squared off, and the taillights were mounted horizontally instead of vertically. 245 Series II models were produced during its four-year production run, riding on larger 205x15 Pirelli Cinturatos. Powering the Series II was the 3500 engine, the 3700 engine with a lengthened stroke that enlarged its engine to 3,694 cc, and the even larger 4000 engine with a 4,012 cc engine that produced 255 PS (188 kW) at 5,200 rpm.

The Series II Sebring continued in production until 1968 when Maserati was forced to drop its older models from production. The last three years of the production run didn't have any major updates anyways except for a slight power increase for the 4000, now up to 265 PS. A total of 593 units were produced from 1962 through 1969, with 348 of the Sebring 3.5 and 245 of the 3.7 and 4.0 (combined).

The Maserati 3500 series was a success line of road going cars and literally transformed the company from a specialist constructor of sports racing and grand prix cars into a legitimate series producer of high quality gran turismo automobiles. This ....[continue reading]

This Maserati Series I Sebring was built in 1963 and delivered new to Bologna, Italy, finished in Amaranto Roma over a Black leather interior. It remained with its original owner for two years before it was purchased by an individual from Sasamotors ....[continue reading]

Maserati produced 348 examples of the Series I Sebrings. This particular example was delivered new to Genoa, Italy, on January 14th of 1963 to Sig. Olivia. It is believed it left the factory in Grigio Montebello paint with black leather seats. It rod....[continue reading]

The Maserati Sebring was an extension of the Maserati 3500GT series but on a shorter wheelbase. The car is powered by a dual-overhead-cam, inline, 6-cylinder engine developing 235 horsepower. It is fitted with a front coil-spring and rear semi-ellipt....[continue reading]

Total 1963 Maserati Sebring I production: 0
© 1998-2021. All rights reserved. The material may not be published, broadcast, rewritten, or redistributed.