The steel monocoque frame had a tubular steel rear sub-frame with an independent suspension system at all four corners, comprised of unequal-length wishbones, coil springs over gas-filled telescopic shock absorbers with electronic control servos, and anti-roll bars. Two damper settings were available including 'Sport' and 'Comfort.' Power-assisted steering was standard but could be replaced by a manual steering rack setup by special order. The Pirelli tires measured 225/40ZR 18 at the front and 265/40 ZR 18 at the rear.

The asymmetrical seats, with the driver being slightly closer to the car's centerline than the passenger, were upholstered with Connolly leather hides.

The F355 did not follow Ferrari's traditional nomenclature (engine capacity in liters followed by the number of cylinders), instead, the first portion represented the engine's liter capacity (3.5) and the final '5' represented the valves per cylinder.

At its introduction, only the Berlinetta body style was offered. The Spider (a convertible) and the GTS (Targa) followed in 1995. Formula One-style electrohydraulic-operated automated manual paddle-shift transmission was introduced in 1997 and models equipped with this transmission were designated the 355 F1.

For 1998, the mid-engine, rear-drive vehicle was given an F-1 style-shifting mechanism. The system had a small toggle switch on the console used to engage the reverse gear. Two paddles extended from either side of the steering wheel to operate the gears. Pulling both paddles toward the driver, the gearbox was put into neutral.

The F355 was the last of the mid-engine Ferrari models to employ the Flying Buttress rear window, ending the lineage whose history dated back to the Dino 206 GT of 1965.

For the F355, Ferrari developed a new 3.5 liter 90° V8 engine developing 375bhp at 8250 rpm with a redline of 8500 rpm. Maximum torque was 268 lbs-ft at 6000 rpm. The specific output of this remarkable 5-valve unit was 109bhp per liter. The engines aluminum block had Nikasil-coated wet steel liners. Peculiarly light forged aluminum-alloy pistons drove the crankshaft through titanium alloy con....
Continue Reading >> 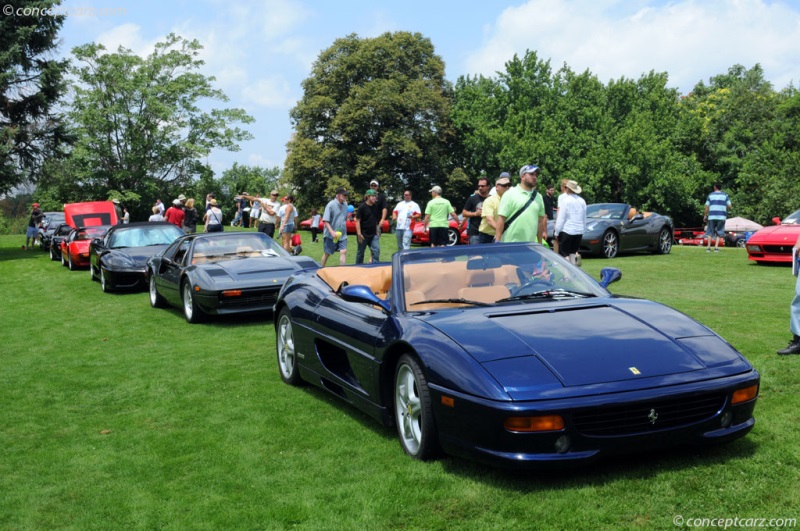