In a world premiere, Volkswagen will be presenting the Touareg R50 on October 11 at the Australian International Motor Show in Sydney. Its power of 258 kW / 350 PS (at 3,500 rpm) positions the new Touareg version among the most powerful SÚVs in the world. The Touareg R50 can be ordered in Germany at prices starting at 88,260 Euro; it will be introduced to the market this November. 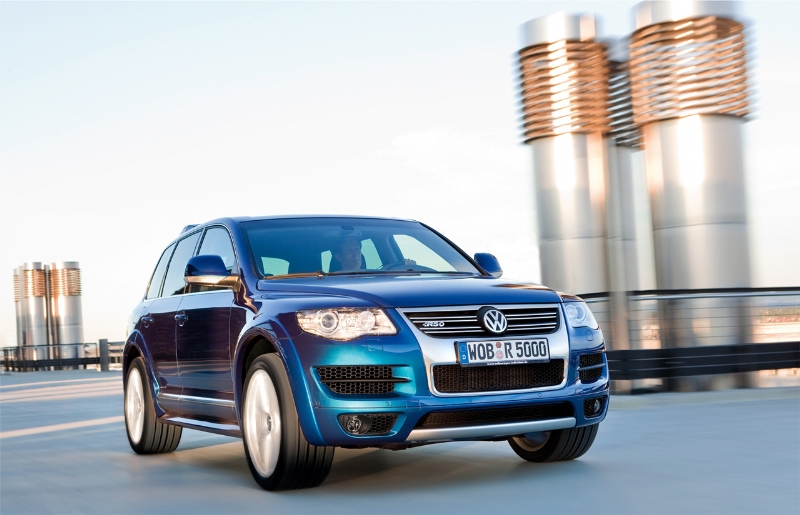 The engine characteristic of the Touareg R50 is marked by a torque level nearly unattainable by the competition: The V10 TDI of the Touareg R50 develops its enormous power of 850 Newton-meter at a low 2,000 rpm. The turbo diesel was derived from the well-known ten cylinder with 230 kW / 313 PS. Adjustments to its turbo charging and modified engine management enabled a 28 kW / 37 PS increase in power and a considerable 100 Newton-meter increase in maximum torque. Únder these new parameters, the SÚV accelerates to 100 km/h in just 6.7 seconds (production car: 7.4 seconds); its top speed is 235 km/h. In relation to engine power and vehicle size, the fuel consumption of the production ten-cylinder diesel equipped with a particulate filter is a moderate 9.6 liters per 100 km (highway) and 12.6 liters per 100 km (overall). Despite big gains in power and torque, its DIN fuel consumption values have remained constant compared to the Touareg V10 TDI.

In keeping with the performance potential of the R50, Volkswagen Individual designed new exterior and interior features according to the R philosophy. From the outside, the new Touareg R50 is easy to recognize with its 21-inch Omanyt type alloy wheels and size 295 tires, blue painted brake calipers, discrete wheel well flares, side skirts and distinctive bumpers (Sport Design Package), as well as a modified radiator grille (in a matte finish chrome).
Offered exclusively on the Touareg R50 is the car color 'Biscay blue'. Blue hues of this type have been typical of the high-powered R models since the first Golf R32 was introduced in the year 2002. Offered as optional car colors on the Touareg R50 are 'Campanella white', 'Reflex silver', 'Black Magic' and 'Atacam gray'.

On the inside, the SÚV's features include a sport seating system in anthracite-colored nappa leather with R50 logo integrated in the headrests. The logo was also integrated in the stainless steel tread plates. Also in keeping with the sporty character of the Touareg is the light-colored 'engine spin' decor of the interior – a metallic structure similar to that previously used on race cars – as well as metal worked caps for the accelerator and brake pedals. An R50 logo also decorates the gearshift lever of the six-speed automatic transmission (Tiptronic). Standard features the Touareg R50 also include a winter package (including seat heating for the rear seats), the Premium Memory Package (including electrically adjustable seats, steering column and seatbelt height), net partition behind the rear seats and a ski sack.Source - Volkswagen

The seventh-generation version of VWs worldwide best seller offers more space, less weight, and increased efficiency at an even better value Pricing starts at %2417,995 for the two-door Golf Launch Edition model with manual transmission New TDI® S m...
© 1998-2021. All rights reserved. The material may not be published, broadcast, rewritten, or redistributed.