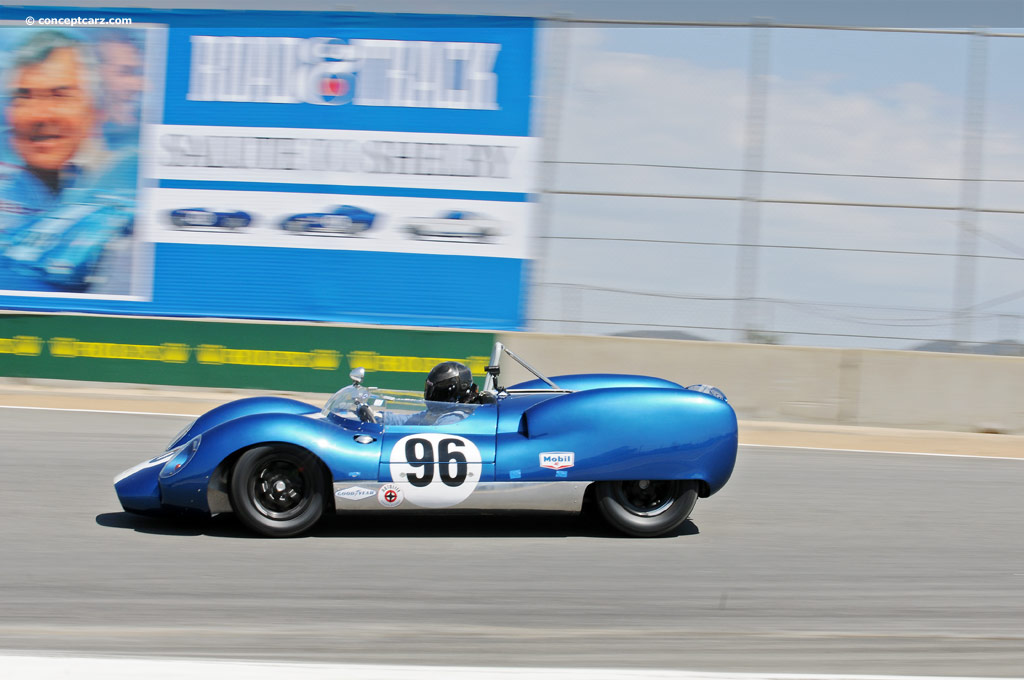 Sports car racing had been slowly growing in popularity since the conclusion of the Second World War. As the 1950s were coming to a close, the interest in the sport began to peak. Competition had grown and designs had became perfected. Cooper began work on their racer in 1958, with the intention of competing during the 1959 season. The resulting vehicle was named the Monaco, in honor of Trintignant's accomplishments at that race in 1958. A Cooper Monaco prototype was displayed at Hollyfield in November of 1958.

Sports car racing requirements at the time stated one working door, and two seats, along with a host of other requirements. They had to comply with FIA regulations used in Europe and built solely for racing. Superchargers were not allowed; the use of superchargers bumped the car into another class. The vehicles engine size determined its racing class.

The Cooper Monaco chassis was made up of four large tubes resting on a wide wheelbase. The engine bay was designed to accept a variety of engines, such as the Bristol engines which had been used in Cooper's open-wheeled Formula racing cars. As competition increased from other marques such as Lotus, Cooper continued to refine their Monaco by giving them more rigid frames, improved suspension, engine modifications, and continued to perfect the design. The Monaco and the Cooper Formula cars shared many similarities and mechanical components in an effort to minimize problems during development and to streamline the building process.

The spaceframe chassis was designed for a mid-engine layout with seating for two. The rear-mounted engine meant no central transmission tunnel was needed which helped in weight reduction and allowing for more power to reach the rear wheels. A Citroen-ERSA four-speed transaxle with was mated to the 1.5- or 2.0-liter FPF engines. The engines were mounted at an 18-degree angle and attached via four points on rubber bushings. The 12-gallon aluminum fuel tank was mounted outboard on the left side of the chassis rails. The driver and outboard battery were located on the right-hand side. This configuration was chosen to keep the driver as far away from the fuel source as possible, and to distribute the weight more evenly.

The rack-and-pinon steering was centrally located. The front suspension as comprised of double wishbones and coil springs and damper units. In the rear was the tried-and-true transverse leaf-spring setup with a single lower wishbone. Girling disc brakes were at all four corners and measured 10.25 inches in diameter.

The entire package had a wheelbase of 91 inches with a length of 141-inches. As expected, the weight of the vehicle was pretty well distributed, with 44% in the front and 56% in the rear.

The Cooper Monaco's immediately dominated the racing circuit and eventually became one of the most successful mid-engined sports racing cars ever constructed. When introduced, Cooper did not plan on running any works cars. The first few examples sold were tax-free kit cars. In total, eight examples were registered in 1959, each with unique specifications and purposes.

The Cooper Monaco MKII Type 57 was raced during the 1960 season and was nearly identical to the MKI, except for a longer nose. The MKII was produced in smaller quantities and most were sold in Britain where they provided many podium finishes for their drivers.

In 1961, Cooper introduced their third iteration of the Monaco, the Monaco MKIII Type 61. BY now, the Monaco was basically a Formula 1 car in two-seater configuration. These versions had straights tubes in the frame, replacing the curves and angles, and similar to the Lowline Formula 1 cars. There was a wide radiator intake. The suspension was improved with the use of coil springs and wishbones at the rear; this was the first time a production Cooper car would contain this setup. To improve aerodynamics and to appeal to the American market, the cars were given tail fins and a slightly revised body.

There were three Monaco Mark III's registered, including the prototype machines. One went to Roger Penske, another went to Texan Hap Sharp, and the third was sold to British privateer Peter Berry.

In 1963, Carroll Shelby's Cobras were doing very well in SCCA Competition. They won the A/Sports Racing National Championship and US Road Racing Championship. Though these street-derived Mustang Cobra vehicles were fast, they could not compete with the USAC-sanctioned 'Fall Series' held on the West Coast. This series would eventually evolve into the Canadian American Challenge Series (CAN-AM), which had little rules and restrictions resulting in high horsepower cars with lightweight, aerodynamic bodies, large wings and tires.

Carroll Shelby had all of the ingredients to compete in the Fall Series, except the car. He used his connections in England to resolve that problem. He approached John Cooper in search of finding a car that could house a 289 cubic-inch Ford V8 engine. Cooper had enjoyed great success with his mid-engined Coventry Climax-powered sports cars, and their successor, the Monaco. Charles Cooper and his son John, had created a series of non-production car based sports racing cars using a multi-tubular chassis designed to hold Bristol engines. From this, other series cars were constructed. There was potential in the 1100cc Coventry Climax FWA engines, due to their lightweight construction, power, and durability. In 1955, a lightweight and aerodynamic body was constructed to house these engines. These sports-racers were known as 'Bobtails'. The Monaco cars were further evolutions of the Bobtails.

Shelby purchased two cars, CM/1/63 and CM/3/63 and powered them with an American cast-iron V8 engine. The engines featured four dual chock downdraft Weber carburetors and matted to a BMC/Huffaker four-speed transaxle. The gearbox proved to be problematic, so it was replaced by a Colotti four-speed unit, which, too, was not without its problems. The body was constructed of aluminum and clothed the 1.5-inch 18 gauge tubing and full independent suspension with coil springs and shock absorbers. They were delivered early in the season but they were not completed until the close of the USRRC season.

Carroll Shelby nicknamed these cars, the 'Cooper Ford', which persisted until it was replaced by Steve Smith of Car & Driver who thought up the name 'King Cobra'. This was the perfect name for these newly created sports-racers.
By Daniel Vaughan | Dec 2015

Six Type 61 Cooper Monacos were built and sold to the USA. Four went to Shelby American, were powered by the Ford 289 V-8 and called the King Cobra. One went to John Mecom. This car CM/3/64 went to Jack Brewer and was raced with a 327 Chevrolet V-8. ....[continue reading]

After the 1963 United States Road Racing Championship ended, Carroll Shelby knew his Cobras would not be competitive against the new rear-engined sports racers. He realized the prestige and publicity that the west coast races brought, so Shelby purch....[continue reading]