The Peerless Motor Company was founded in Cleveland, Ohio, in 1900. Originally a producer of clothes wringers and then bicycles, the Peerless name became synonymous with high quality. With Packard and Pierce-Arrow, it was often referred to as one of the 'Three P's of Motordom,' with the 'P' also indicating Premium cars. Originally the transport of a mining engineer in Lake City, Colorado, this Peerless was bought by its current owner from the Sullivan Collector in Hawaii in 1990. The current owner has participated in the London to Brighton Veteran Car Run many times with this vehicle.

The Rear Entrance Tonneau is typical of the stylish motorcars built by Peerless in the early period. Famed for its engineering ingenuity, the Peerless Motor Car Company pioneered the use of the shaft drive when the rest of the auto industry was still using belts and chains. Its reputation for durability led to the company slogan 'Peerless - all that the name implies.' This car participated in the 1984 London to Brighton Veteran Car Run driven by its then owner Phil Hill, who restored the car in the 1980s. It has a two-cylinder, 16 horsepower engine mounted in the front. 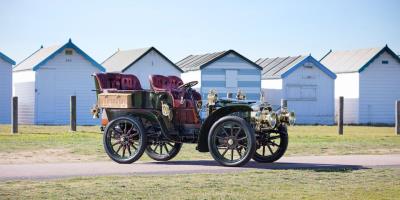 At Bonhams London To Brighton Run Sale Bonhams annual London to Brighton Run Sale proved as popular as ever this year, with an impressive 94 of lots sold (12 out of 13 motor cars) and a total of £1,750,778 achieved. The top lot of the sale...

It was full steam ahead for Bonhams London to Brighton Sale today, 3 November, with an astonishing 91 of the magnificent veteran motor cars, quads and tricycles selling by value. The highlight of the sale was the 1903 Panhard et Levassor Model B 10hp... 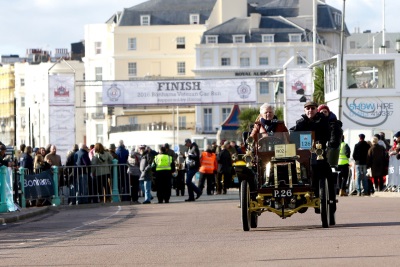 London To Brighton Regulars Go For Gold On 2017 Run

A rare 1904 Renault Type N-B that was owned by a French family for 60 years leads Bonhams traditional London to Brighton Run Sale of Veteran Motor Cars in London on 4 November. It is estimated at £250,000-280,000. The car was one of the first four-cylinder...
© 1998-2020. All rights reserved. The material may not be published, broadcast, rewritten, or redistributed.