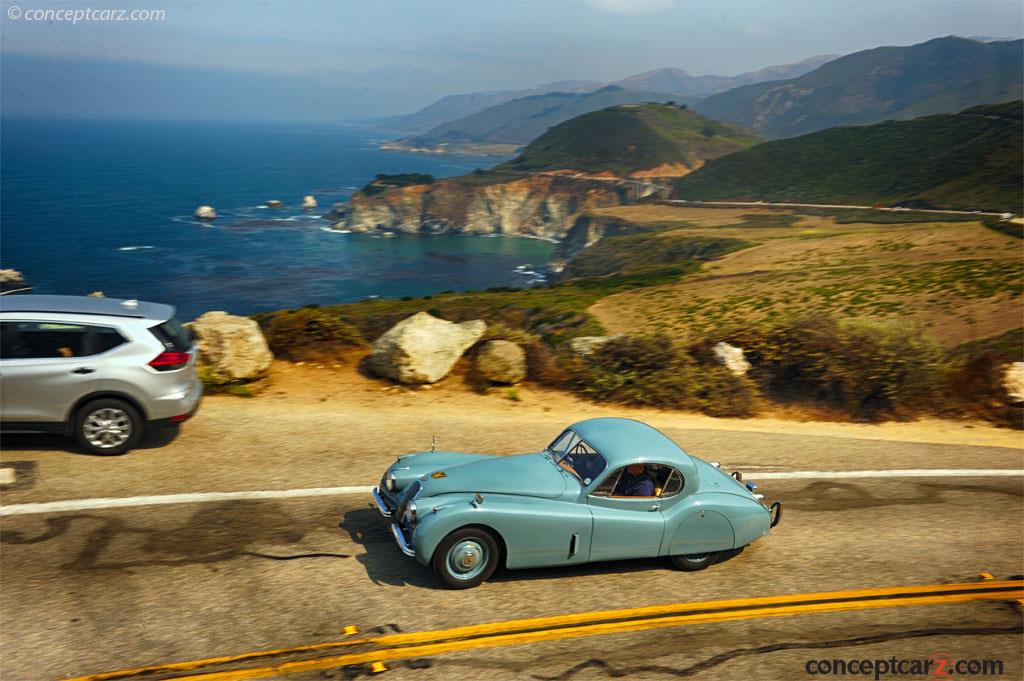 The Jaguar XK120 was conceived and constructed in just a few months before making its debut at the 1948 Earls Court Motor Show in 1948. The demand for what was then the world's fastest production car took Jaguar by surprise and they found it difficult to keep pace with the demand, forcing them to re-think the XK120's method of construction. The body had been conceived as a coachbuilt, aluminum paneled structure with sales not expected to exceed 200 units in its first year. In conjunction with the Pressed Steel Fisher Company, a new all-steel paneled body was developed. Power was from the XK engine which had been developed prior to the war and had been intended for Jaguar's forthcoming Mark VII saloon. The six-cylinder 3.4-liter engine had a modern design with twin overhead camshafts, an aluminum-alloy cylinder head, seven main bearings, and produced 160 horsepower. The chassis was essentially a shortened version of the Mark V saloon and employed the William Heynes' torsion bar independent front suspension. In May 1949, on the Jabbeke to Aeltre autoroute, recorded a speed of 126 mph with its hood and side screens in place. With the hood and windscreen removed and an under-tray fitted, it had a record speed of 132 mph.

Coupe (introduced in 1951) and drophead coupe versions followed, along with the Special Equipment (SE) package with 180 hp for customers seeking even more power.

Jaguar created a sensation when the XK120 was launched in October of 148. It was a true 120 MPH sports car with 160 horsepower from a 3.4-liter double-overhead cam engine. A total of 12,055 units of the XK model were produced.....[continue reading]

It was the XK120 that brought Jaguar to prominence as a sports car builder and giant in the world of road racing. This legendary model was produced between 1949 and 1954. In that time, a total of 12,078 units were built, of which only 2,678 were fi....[continue reading]

The 1953 Jaguar XK120 SE Fixed Head Coupe finished in silver with a black leather interior was offered for sale at the 2006 Worldwide Group Auction held on Hilton Head Island where it was estimated to fetch between $75,000-$100,000. When first constr....[continue reading]

Comfort, beauty, performance, class - the Jaguar XK120 was a legend in its own time. The original XK 120 was a true roadster, with a fully detachable top stored in the trunk. The hardtop coupe version was introduced in 1951 and a convertible in 1953.....[continue reading]

This Jaguar XK120 is an original, left-hand drive example that was completed on the 29th of January in 1953. It was delivered new to R.M. Overseas in Düsseldorf, Germany on 18th February 1953. It came equipped with the 'C-Type' cylinder head, which c....[continue reading]

The Jaguar XK120 was conceived and constructed in but a few months. It made its debut at the 1948 Earls Court Motor Show were it caused a sensation. At the heart of the XK120 was the fabulous XK engine; a 3.4-liter 'six' that boasted twin overhead ca....[continue reading]

This Jaguar is finished in its original pastel green paint. This XK120 M was discovered in 2013 having been in single family car for over 58 years. The current owner acquired the car and began, in early 2014, an intensive refurbishment. This special ....[continue reading]

This Special Equipment XK120 Drophead Coupe was completed at the Jaguar works in May of 1953 and was delivered new through Hoffman Motor Car Company in New York, New York, to its first owner. It left the factory finished in the classic British Racing....[continue reading]

The first Jaguar XK120s arrived in the United States in August 1949, delivered to distributors Charles Hornburg in Los Angeles and Max Hoffman in New York. With a 3.4-liter DOHC engine and sensuous flowing lines, they were highly sought after. Betwee....[continue reading]

Jaguar produced 12,055 XK 120 roadsters, coupes, and drophead coupes from 1948 to 1954. This production total includes 7,374 steel-bodied roadsters. This particular example is finished in Olde English White over Burgundy and Biscuit leather. This car....[continue reading]

Launched at the London Motor Show in 1948, the Jaguar XK120 was an immediate best seller for both road use and also for racing. In 1951 the original open models were joined by an even more beautiful fixed head coupe. ....[continue reading]

The XK120 was launched in roadster form at the 1948 London Motor Show as a test bed and show car for the new XK engine. It caused a sensation, which persuaded Jaguar founder and design boss William Lyons to put it into production. The '120' in its na....[continue reading]

This XK120 originally arrived in Bogota, Columbia as a race car to increase Jaguar sales. My father, Victor Bessudo, was the distributor of all British cars along with his partner in the early 1950s. It was ordered in a special color of 'twilight blu....[continue reading]

The Jaguar XK 120, designed and constructed in just a few months, made its debut at the 1948 Earls Court Motor Show. Upon its introduction it was among the world's fastest production car. Unfortunately, its slow-to-produce alloy bodywork would have t....[continue reading]

The XK120 was launched in open two-seater (roadster) form at the 1948 London Motor Show as a test bed and show car for the new Jaguar XK engine. The reveal caused such a sensation that Jaguar founder and Chairman William Lyons was easily persuaded to....[continue reading] 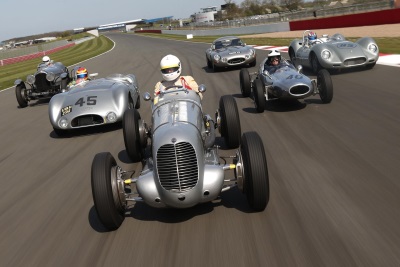 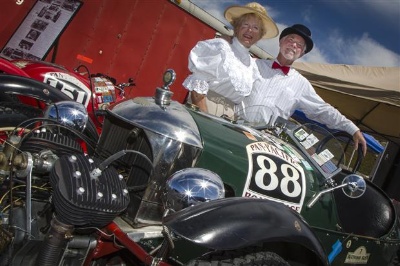 THE LADIES TOUCH While vintage automobile racing trends as a mostly-gentlemans sport, plenty of women have shaped its decades-old history, and several will keep the wheels in motion driving...