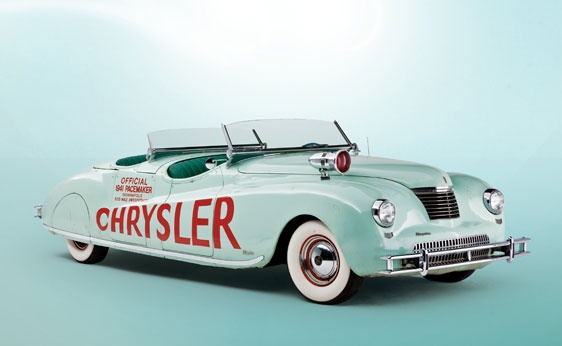 The Chrysler Newport first appeared in the early 1940's. It was known as the Newport Phaeton and production lasted from 1940 through 1941 partly due to low production numbers. Only five were produced. The design was by Ralph Roberts. It was powered by an eight-cylinder engine and used a three-speed manual gearbox to send the power to the rear wheels. A Newport appeared at the Indianapolis 500 race in 1941 and served as a pace car.

The name was revised in the 1950s and was a trim level on each of the Chrysler series. The Newport signified a two-door hardtop body style.

In 1961 the Newport name reappeared as its own Model. It was immediately popular and was responsible for most of Chrysler's sales. At a price of just $2964, the vehicle featured full-wheel covers, and minimal amounts of exterior and interior trim. Under the hood was an eight-cylinder engine that produced 265 horsepower. It was available as a two- and four-door convertible, and two- and four-door hardtop.

In 1963 the design was updated and again in 1965. It now sat atop of the Chrysler C-platform with the station wagon being renamed to the Town and Country lineup. The convertibles were discontinued in 1971.
By Daniel Vaughan | Nov 2006The name Newport was first used by Chrysler on a 1940 showcar of which five actual vehicles were produced. Between 1961 and 1981 the Newport was a name used by the Chrysler division of the Chrysler Corporation used as both a hardtop body designation and for its entry-level model.

Unveiled in 1940, the Chrysler Newport Phaeton was a 2-door low production roadster than utilized an I8 engine that was linked to a 3-speed manual transmission. Only produced for one year, the first generation Newport was based on the Chrysler New Yorker and was designed by Chrysler designer Ralph Roberts. A total of five units were produced. Chrysler founder Walter P. Chrysler had one that he used as a personal vehicle. Another owner was actress Lana Turner. The 1941 indianapolis 500 race featured the Newport Phaeton as the pace car.

From 1949 through 1961 the second generation of Newport was featured to designate the 2-door hardtop body style in Chrysler's lineup. A new hardtop Newport model was placed in each Chrysler series, Saratoga, the Windsor and the New Yorker. Originally, the totally redesigned '49 Chrysler Town and Country was proposed as a hardtop, but in the end, the body style only appeared during the model's final year in 1950.

In 1961 Chrysler revived the Newport name for their full-size entry-level model. Priced at $2,964, the Newport was strategically placed to fill the price gap between Dodge and Chrysler that emerged when DeSota was deleted. Quite successful, the Newport comprised the bulk of Chrysler production. The base Newport sedans were detrimmed versions of Chrysler's traditional upmarket models that featured hubcaps rather than full-wheel covers, very plain interiors, and a minimal amount of exterior trim. Unfortunately, in the long run, cheapening the brand's cache with an inexpensive model wasn't good for Chrysler.

The '61 Newport was available to the buying public as either a 2-door convertible, 2-door hardtop, 4-door sedan, 4-door hardtop, and 4-door station wagon. Though most Newports were equipped with the 305 hp 383 in³ V8, the base engine was the 361 in³ V8 engine that was rated at 265 hp. The trademark fins were removed for the 1962 model year. For 1963 the Newport was restyled next to the New Yorker and Chrysler 300. This body style remained until 1964. The Newport received the small, chrome-topped fins again in 1964.

The fourth-generation Newport was assembled at Jefferson Assembly Plant in Detroit Michigan. Redesigned on the then-new Chrysler C platform, the next Newport ran from 1965 through 1968. The Newport station wagon was renamed the Chrysler Town and Country.

Assembled in Belvidere, Illinois, the fifth generation of the Newport was again built on the C-body platform. Redesigned for the 1969 model year, the Newport now featured the 'Fuselage Styling' that would eventually become symbolic of Chrysler's full-size vehicles until the end of the 1973 model year.

After 1970, Newport convertibles were discontinued. In 1978 production of the C-body Newport also ended along with the Chrysler New Yorker. During the previous year, related Dodge and Plymouth C-body car had already been dropped. The American car industry's last true two-door and four-door hardtops were offered with the 1978 Newport.

A newly resized Newport was introduced in 1979 on the Chrysler R platform which was a derivative of the circa 1962 Chrysler B platform. This downsized model reduced model availability to a single 'pillared hardtop' 4 door sedan. Chrysler went about the reduction of their vehicle a different way from GM and Ford who downsized their big cars by chopping with an ax. Chrysler improved fuel efficiency by reducing weight but retaining as much of the traditional full-size look and feel as possible.

A much more attractive vehicle was built from this process, but unfortunately, some of the weight-saving measures proved to be more trouble then they were worth. The plastic brake wheel-cylinder pistons that had the tendency to swell and bind up the brakes following a couple of years of service. Another new innovation where chrome-plated aluminum bumpers that were replaced in 1980 with a newer and stronger steel rear bumper.

Sales were strong at the beginning of 1979, but unfortunately due to Chrysler's unsteady financial condition, along with tightening oil and gasoline supplies, all of the R-body models were discontinued following a short run of 1981 models. Chrysler began to shift towards smaller front-wheel drive vehicles and the Newport was replaced with the front-wheel-drive Chrysler Executive for 1983.By Jessica Donaldson

There were as many as six of these Newport Dual Cowl Phaetons produced in 1940 and 1941. Some say five examples were produced, others say six. The vehicle was designed primarily as a show car by Ralph Roberts, and each car was basically custom buil....[continue reading]

The Chrysler Newport, one of the last dual cowl phaetons, was designed by Ralph Roberts and custom-built by LeBaron, Carrossiers in Detroit, MI. The car featured an all-aluminum body, concealed headlamps, folding windshield and hide-away top. There w....[continue reading]

Along with the Thunderbolt roadster, the Newport was the flagship of Chrysler's styling efforts for 1941. The model was chosen as the pace car for the Indianapolis 500 that year, and this particular example with serial #1 may well be that pace car. S....[continue reading]

The automobile has evolved ever since its inception. Some periods in history were met with great advances in design, and the late 1930s and early 1940s were no exception. Among the leaders in this evolution were the manufacturers from Detroit. Eds....[continue reading]