For the 1972 Can-Am season, the McLaren team announced the signing of Jackie Stewart to partner with Denny Hulme in the new M20 sports car. Stewart tested the new McLaren at Silverstone but became ill prior to the start of the season, forcing him to withdraw from the team on advice of his doctors. At the last minute, McLaren recalled 1971 Can-Am champion Peter Revson from the Formula One team to which he had been promoted. Together with Hulme, the two were on hand when the season opened at Mosport in June.The McLaren domination of the previous five years would now be seriously challenged by the new turbocharged Porsche 917/10K entered by Penske Racing and driven by Mark Donohue and George Follmer. McLaren intended to launch the M20 with a turbocharged Chevrolet engine, but it couldn't be sorted out in time. Instead, the new car appeared with an 8.1 liter, aluminum Chevrolet engine. The new car's water radiators were now mounted on either side of the monocoque between the front fenders in order to improve the car's downthrust when combined with the strut-mounted wing on the rear body section of the car. This combination improved traction and cornering.Unfortunately, the McLaren effort wasn't enough to offset the huge investment made by Porsche in its Can-Am program, and the orange car's domination of the series ended with just two wins in 1972. At the end of the season, McLaren realized that it couldn't compete with Porsche juggernaut and withdrew from the series. Scoring 43 victories, including 19 consecutive race wins between 1968 and 1970, the McLaren team set records that would never be approached by another team. Without McLaren, the Can-Am series could never be the same.
Can-Am VehiclesConcepts by McLaren 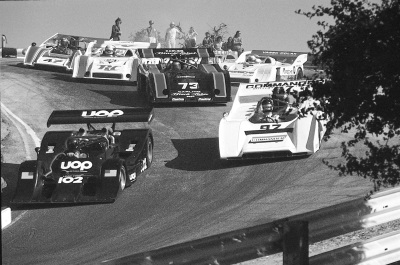