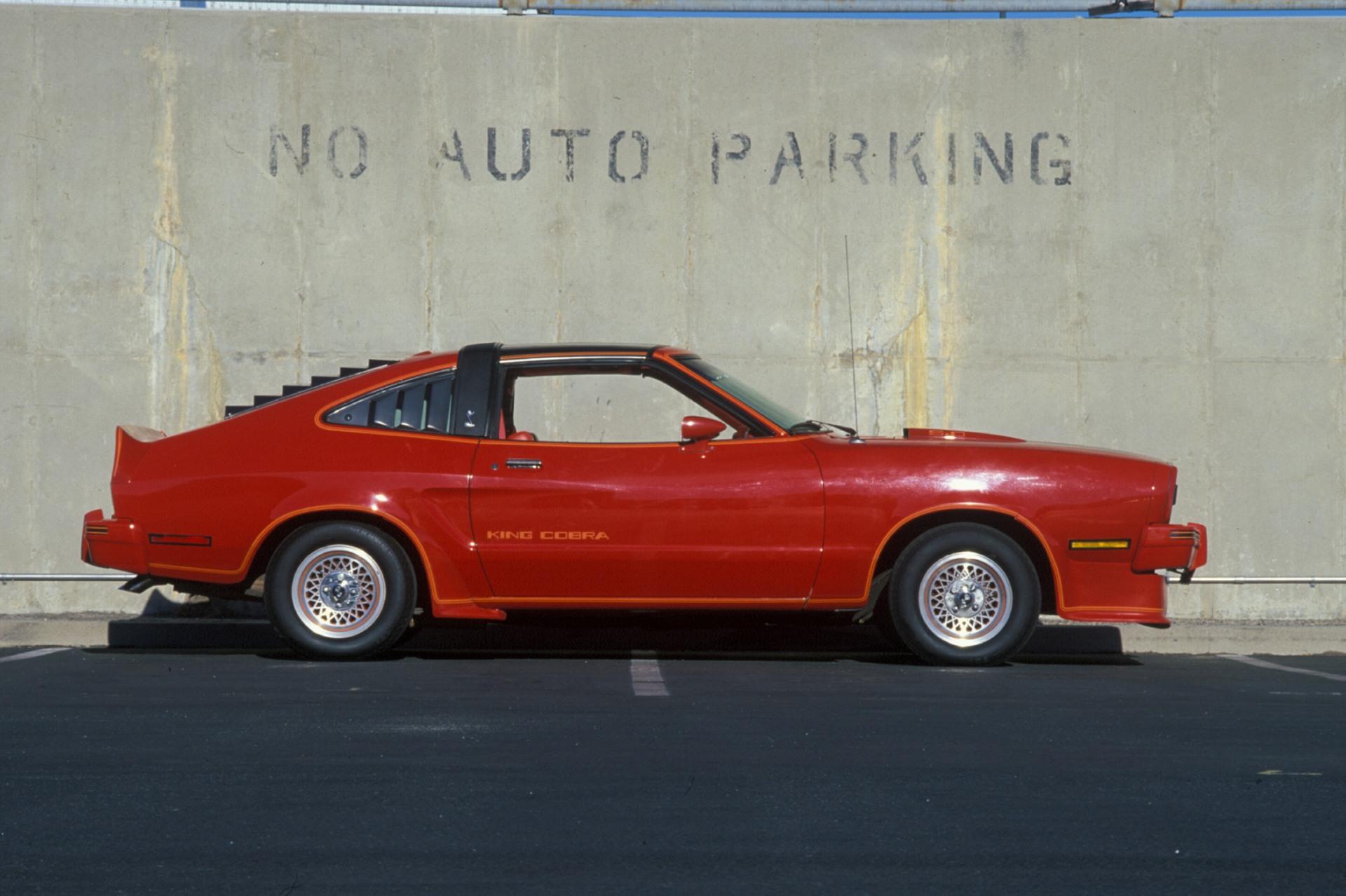 1978 was the final year for the second-generation Mustang that had been introduced in 1974 and was a drastic departure from the car it preceded. It went from mid-size to compact and lost a foot in length in contrast to the 1973 model. The Cobra II was introduced in 1976, basically a white or blue edition in the famed Shelby color scheme. To help bolster production for the upcoming redesigned 1979 models, Ford introduced the King Cobra Mustang, featuring body ground effects, front & rear spoilers, and hood scoop surrounded with a decal of a king cobra. Ford built 4,313 of these exclusive King Cobra Mustangs and was available only with the venerable 302 cubic-inch, two-barrel V8 delivering 139 horsepower. The second-generation Mustang earned over 1.1 million sales during the four years of production and was named Motor Trend's 1947 Car of the Year. The Mustang II received only minimal changes and updates for its final year of production, with new colors and interior trims making up the bulk of the improvements. The 2.8-liter V6 was now fitted with a plastic cooling fan and a new electronic voltage regulation replaced the old electromechanical version. Variable-ratio power steering became optional and six new body colors, added late in the 1977 model year, continued as part of the palette. In the front were single round headlamps with clear rectangular horizontal parking lamps set into the crosshatch black grille. Body styles and engine options remained the same as the prior-year with prices decreasing slightly by around $200. The notchback coupe had a base price of $3,550 while the hatchback listed for $3,800.
The base engine was an overhead cam four-cylinder unit displacing 140 cubic-inches and delivering 88 horsepower at 4,800 RPM. An optional overhead-valve V6 had a 170.8 cubic-inch displacement and had 90 horsepower. The OHV 302 CID V8 had 139 horsepower and 250 lb-feet of torque. A four-speed manual transmission with floor shift controls as standard and a Select-Shift three-speed automatic was optional. Other optional drivetrain equipment included power brakes, power steering, engine block heater, high-altitude emissions, and California emission system.
Trim levels included the Cobra II, available for hatchback body styles only, King Cobra, Ghia notchback, and Mach 1 hatchbacks. The Mustang Cobra II had been introduced in mid-1977 and had tri-color tape stripes on the body sides and front spoiler, hood, hood scoop, front bumper, roof, decklid, and rear spoiler. Large 'Cobra' block letters were placed on the center bodyside tape stripe and decklid spoiler. Cobra II snake emblem was on the black grille and a Cobra decal was on the back spoiler. Additional features of the Cobra II included black quarter-window and blacklight louvers, black rocker panels, flat black greenhouse moldings, rear-opening hood scoop, and a narrow black band located on the upper doors. The King Cobra was new for 1978 and was similar to the Cobra II but with a few styling changes and additional items. It did not have the bodyside striping but did have a unique tape treatment of a giant snake decal on the hood and pinstriping on the decklid, wheel lips, rocker panels, greenhouse, belt, around the roof area, and the side windows. In the front was a spoiler and the 5.0-liter V8 was standard, along with a four-speed transmission, power steering, and power brakes. It had flared rear quarters, a black grille, color-keyed dual sport mirrors, raised-white-letter tires on aluminum wheels, '5.0L' badging, and the 'King Cobra' nameplate on each door and the back spoiler. The Ghia Mustang had black, blue, or chamois body paint and a chamois or black vinyl half-roof. It rode on aluminum wheels with chamois-color lacy spokes. Pin-strokes and vinyl-insert bodyside moldings made up the rest of the exterior decorations. The interior was done in all-vinyl chamois or black seat trim, black 'engine-turned' dash appliques, and a leather-wrapped steering wheel.The Mach 1 came standard with Mach 1 emblems, raised-while-letter B70x13 steel-belted radial tires on styled steel wheels with trim rings. Power was from the 2.8-liter V-6 and there was black paint treatment on the lower bodyside and back panel.The Fashion Accessory Group added a four-way adjustable driver' seat, lighted driver's vanity visor mirror, coin tray, illuminated entry, striped cloth seat inserts, and came in the choice of nine body colors.
By Daniel Vaughan | Aug 2020