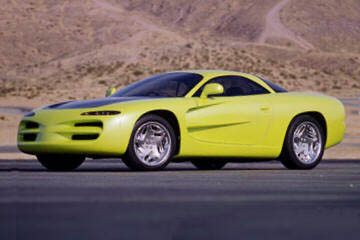 The Dodge Venom Concept was introduced On January 3rd of 1994 and was built on a modified Chrysler PL platform, similar to the one used in the Dodge Neon. It showcased Dodge's Cab-Forward design and came with rear wheel drive, an upgraded V6 engine offering 245 horsepower and 221 pound-feet of torque at 2,800 RPM, and had a projected cost of $8,975. The engine block was comprised of cast iron with carbon fiber and Kevlar aramid fiber components. The suspension system used double A-arms and braking was handled by four-wheel anti-lock disc brakes. The front tires were 19 inches while the rears were slightly taller at 20 inches. The Dodge Venom had a quad exhaust and used various parts from other models such as the side scoop from Dodge Viper, the rear end of the Challenger and Barracuda, and the handle-bar grille from the old Coronet. It was built from steel, with an aluminum structure, and a cantilever roofline. The Dodge Venom Concept was envisioned to be a modern muscle car aimed at performance, and could sprint from zero-to-sixty mph in 5.2 seconds. The Venom was popular but it never made it passed the concept car stage and into production.
By Daniel Vaughan | Jun 2020