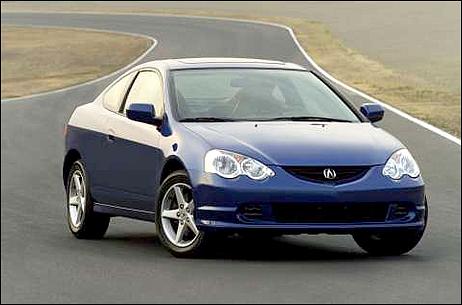 Introduced in July, 2001, the Acura RSX sports coupe was an unprecedented success that won a multitude of industry awards including achieving Car and Driver's '10 Best' and Ward's '10 best Engines' lists. Acura's short-lived replacement for the popular Integra, the RSX was originally produced in 2002 and was available in two trims, the standard two-door hatchback and the sportier Type S.Based on the Honda Civic platform, unfortunately comparisons to its less-expensive cousin followed the Acura RSR throughout its lifetime. The RSX featured a 2.0-liter I4 engine with horsepower that was around 150-160 for the standard trim, and 200-210 for the Type S. The standard trim model featured 141 lb-ft of torque while the Type S featured 143 lb-ft of torque.Both a 5-speed automatic and a 5-speed manual were offered with the standard trim model while the Type S was available as only a 6-speed manual. In 2006 the last RSX was produced while Acura made the TSX its entry-level coupe. A short-lived replacement for the popular Integra, the RSX was sold by Honda in North American and Hong Kong. In Japan, Australia, New Zealand and elsewhere, the Honda continues to sell the Integra as the Honda Integra. In Japan and Oceania the Integra iS and Integra Type S and Type R versions were sold. Canada features three models, Base, Premium and Type S.
Rather than incrementally re-engineering the previous Integra/Civic platform, Honda chose to base the RSX on an entirely new platform. The RSX would share a chassis with the 01 Civic. Since 1994 this platform was the first entirely new entry-level chassis Honda had introduced. The Acura division chose to market the RSX as the Integra's replacement due to it's more luxurious and capable nature. Attempting to gain more brand recognition and respect from older, more affluent buyers, the intent was to market the vehicles more upscale features-set and more luxurious amenities. Honda chose to continue selling the model as the Integra outside of North America.
Honda enthusiasts were not impressed with the RSX suspension that employed MacPherson struts in the front and double-wishbone suspension in the rear. The K-series engine proved to have significant potential for tuning, and the engine featured intelligent VTEC, which electronically adjusts valve lift, valve duration and valve timing, giving the 2.0 L engine a flatter torque curve along with smooth power transition relative to previous VTEX implementations which only adjusted valve lift an valve duration.Featuring the K20A3 motor, the base RSX had an output of 160 hp and is available with either an automatic or a five-speed manual transmission. The Type-S featured a 200 hp K20A2 or 210 hp in 2005 K20Z1 motor and a short-throw 6-speed manual transmissions. Honda switched the '06 model year vehicles to the Rev 8/04 SAE standards for measuring hp. For 200 the base RSX is rated at 155 hp while the Type-S is rated at 201 hp. The RSX Type-S received camshafts, b-pipe and muffler from the exhaust, crankshaft pulley, 4,77 final drive ratio and the intake snorkel duct from the Japanese model Honda Integra Type-R. The rev-limit was now increased from 8100 rpms to 8300 rpms.
Sold in Japan, Australia and various other markets, the Honda Integra Type-R had a reduced weight, a 220 PS / 164 kW / 217 hp K20A engine. The Type-R also featured a limited slip differential and stiffer springs and shocks, 17' wheels on Bridgestone Potenza tires, Recaro suede seats, body trim, and 4 piston Brembo brakes.Unfortunately the RSX didn't fit within the confines of Acura's restructured market strategy the decision was formulated to the Acura brand worldwide. Especially since the introduction of the less expensive 2006 Honda Civic Si, the RSX was discontinued with the final units built in the summer of 2006.The Acura RSX won the ‘2001-2002 Sports Coupe' comparison from Edmunds.com. In May 2002 the vehicle was awarded the ‘Four Wedges & a Bubble' comparison in Car & Driver. In September of 2005 the Acura RSX received the ‘Cheap Speed' comparison in Car & Driver when pitted against the Dodge SRT-4 ACR, Subaru Impreza WRX, Chevy Cobalt SS, and the Saturn Ion Redline.In 2006 the Acura won the Manufacturers' Championship of the Speed World Challenge Touring Car class, running both RSXs and TSXs. In the Drivers' Championship, RSX drivers finished 5th and 9th.By Jessica Donaldson