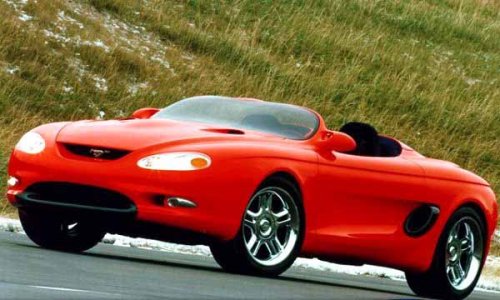 Over a decade of planning, design, and development went into the creation of the Ford Mustang Mach 3 Concept. Designed as a replacement for the third-generation Mustang, the Mach III featured a rounded voluptuous body, two-seat interior, low-cut and curved windshield, and a supercharged 4.6-liter V8 engine offering 450 horsepower. As is often the case with concept cars, several of the design features were implemented into the new production model, however many were scrapped. The low windshield and two-seat configuration, for example, have not made it into a regular-production Mustang to-date. The side scoops, classic grille pony badge, and the tri-bar headlamps were used on the 1994 Mustang.Two examples of the Mach III Concept were built in 1993 in preparation for the Next-Gen SN-95 Mustang introduced in 1994. The program manager at the time, John Coletti, commissioned two examples to be hand-built using funds sourced from the Mustang's launch budget. The project went beyond testing new design and technology, as the completed cars were used for magazine articles and put on display at auto shows and events. Sadly, the example that was painted red was destroyed in a 1994 transporter fire while returning from a show in Canada. The other example, painted green, still exists. The Mach III used a fourth-generation Mustang GT chassis with an 8.8-inch live-rear-axle and a T56 manual six-speed gearbox. The suspension setup was from the production SN-95. The engine was a stock Lincoln Mark VIII powerplant fitted with an Eaton supercharger with a liquid (glycol) charge cooler. The supercharger setup was advanced and unusual, as the glycol fluid traveled through a special tank of fluid from the air-conditioning system. This cooled the blower discharge air for up to thirty seconds during heavy use, delivering increased power and advanced ignition timing.
Since these were show cars, they were not given working instrumentation, driver or passenger windows, or a top. Many of the interior pieces were glued into place. They were functional with the intended purposes of low-speed use for magazine photo-ops and driving onto show stages.
By Daniel Vaughan | Mar 2020

A pillar of American automotive lore, the Mustang is the vehicle the brought sporting dash and styling at a price that almost everyone could afford. Always extraordinarily attractive, the Mustang has been capturing the hearts of drivers for nearly 40 years. Introducing a whole new breed of automobile, the pony car, Ford wasnt content to stand on the sidelines while others jumped ahead. Rather than....
Continue Reading >>
Concepts by Ford