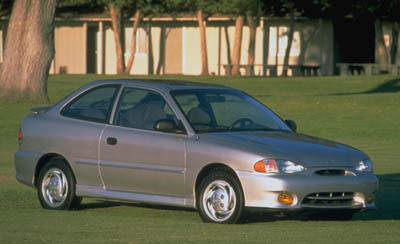 Production of the Hyundai Accent began in 1995 and served as a replacement for the Hyundai Excel, though in some markets it was called the Excel. In France it was called the Hyundai Pony. The car became an instant success in some markets, becoming the third best-selling vehicle in Australia in 1996 and 1998. The car had a standard five-speed manual gearbox and optional four-speed automatic. The standard engine was a 1.5-liter four-cylinder unit which produced 92 horsepower. A slightly more powerful version of the 1.5-liter engine was available, which boosted power to 105. The car was built on a 54.9-inch wheelbase and measured 161.5-inches in length. In the United Kingdom, the car was available in sedan, hatchback, and coupe configuration. Fuel mileage was excellent, gaining about 33 miles-per-gallon.In 2000, the Accent was redesigned with slightly larger proportions and given a more modern and curvy body. Another facelift occurred in 2003 with another major redesign in 2006. This Second Generation of the Accent was available in four-door sedan and hatchback configuration, with a 2-door hatchback also available. There were a few engines to select from, all displaced 1.5-liters. The SOHC 12-valve four-cylinder version produced 92 horsepower and the 16-valve DOHC version produced over 100.
In the North American market, the Accent was available in GL, GLS, and GT trim levels. The 1.5-liter engine was all that was offered until 2003, when the 1.6-liter unit became available. The five-speed manual was still standard with the four-speed automatic offered as option. The cars rested on a wheelbase that measured 96.1-inches.
At the 2005 New York International Auto Show, the next generation of the Accent was displayed to the public. The GLS Version, the only trim level available in the US, featured a larger interior, air conditioning, six airbags, power steering, six-speaker CD stereo, four-wheel disc antilock brakes, electronic brake-force distribution, and tilt steering. The price tag was listed at just under $13,000. A premium sports package included 15-inch alloy wheels, power windows, heated mirrors, and remote door locks. The price for this package was $1,500. Shortly after the release of the third-generation Accent, the three-door hatchback became available and offered in GS and SE trim levels. The Accent has earned the title of third-best selling subcompact in the United States, with the top two honors going to the Chevrolet Aveo and the Toyota Yaris.
By Daniel Vaughan | Jul 2007