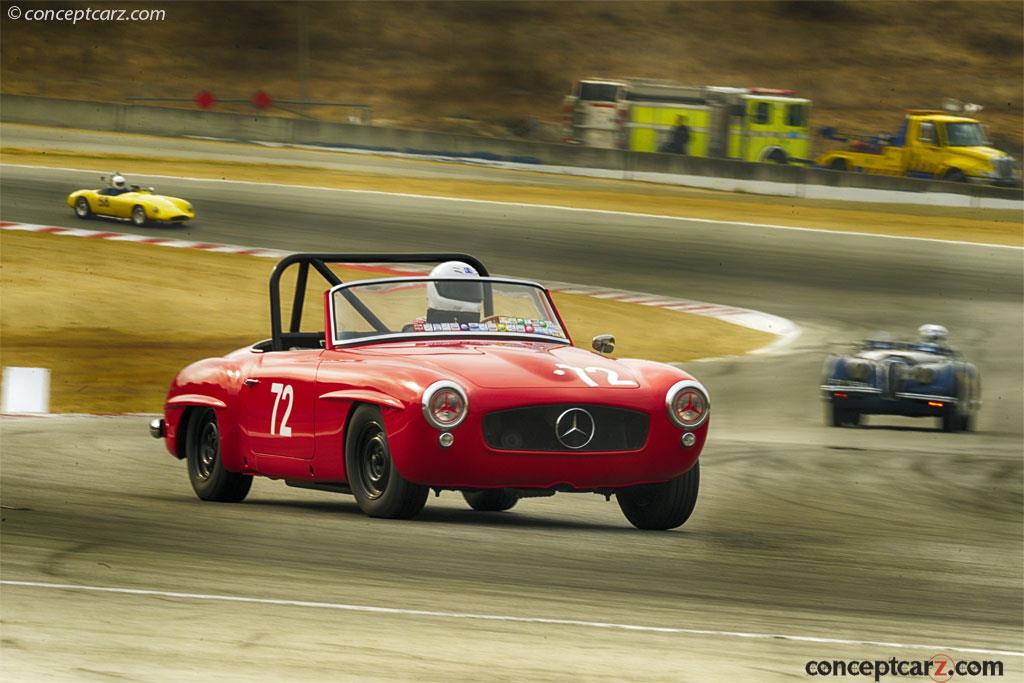 Mercedes-Benz produced the 190SL (SL for Super-Leicht or Sport-Leicht) two-door grand touring convertible from May of 1955 through February of 1963. It bore a similar resemblance to the exotic 300SL, with similar engineering with double wishbone suspensions at the front and swing axles at the rear. Unlike the 300 series cars, the 190SL used a monocoque construction and rested on a shortened version of the 'Ponton' Saloon (W121) platform. The all-new, SOHC, dry-sump, over-square four-cylinder engine displaced 1,897cc and produced 120 horsepower, giving it a maximum speed of 112 mph. It was backed by a four-speed manual gearbox operated by a short, floor-mounted lever. Steering was by recirculating ball and braking by power-assisted drums all-round.

While the 300SL was exotic, expensive, and exclusive, the 190SL was better suited for people of closer-to-average means. The 190SL was a stylistically scaled-down copy of the 300SL, with two fewer cylinders, with the added extras of a slight bulge in the rear fender contours, and a wider track.

Max Hoffman, Mercedes' representative in the United States, was the visionary behind the 190SL. He recognized the important role the 300 SL 'Gullwing' played in the hearts of American buyers, but its steep expense and coupe-only body style limited its appeal. Hoffman pressured Mercedes-Benz's upper management to build a simpler, less costly open model that was designed specifically for the United States and could appeal to a wider audience. The resulting 190 SL soon dominated the successful niche that existed for Mercedes-Benz in the United States and successfully combined stylish good looks, excellent road manners, and luxurious accommodations.

Production of the 190SL continued through 1963 with 25,881 examples built. Pricing in the United States was approximately $4,000 - the removable hardtop added an additional $295. A small third-passenger transverse seat was optional.
by Daniel Vaughan | Sep 2020

Max Hoffman was responsible for the sporty two-seat Mercedes-Benz 190SL sports car. The S represented Sports while the L meant Light or Sehr Leicht. With a curb weight of 2560 pounds, it was hardly light when compared with other vehicles in its class, some 500 through 1000 pounds less. It was however an excellent alternative to the higher-priced Mercedes-Benz 300SL. The gullwing-door 300SL was....
Continue Reading >>