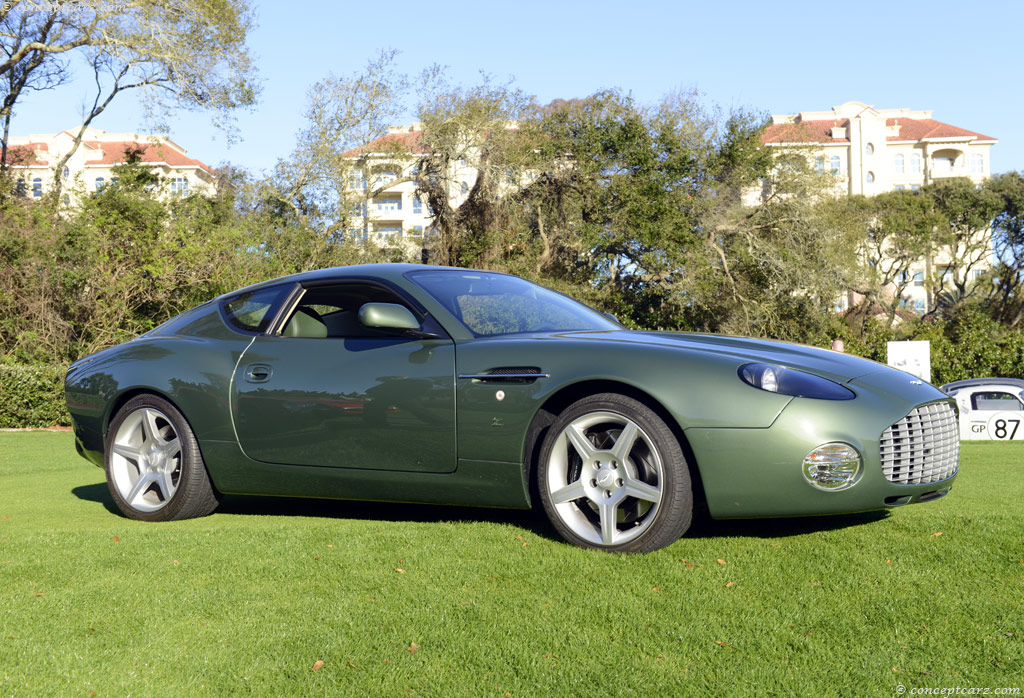 Aston Martin DB7Z Zagato was born during a meeting between Elio's son Andrea Zagato, and Ulrich Bez, CEO of Aston Martin Lagonda Ltd., in Pebble Beach Concours of Elegance 2001. The idea was to relaunch the collaboration between the two companies.

Four months later (January 2002), Zagato presented to Ulrich Bez and Henrich Fisker his first sketches of the car and obtained the approval during the Geneva Motorshow (March 2002).

This represents a new chapter in the long-standing relationship between the two firms inaugurated in the Sixties with the DB4 Zagato and subsequently consolidated with the Vantage and Volante Zagato. The sleek and muscular DB7 Zagato is a return to the styling that made the DB4 Zagato a classic. From a grill that references the original, to the long hood, truncated tail, and curvaceous top crowned by the immortal Zagato 'double bubble' roof, the DB7Z can only be an Aston-Zagato. The interior will mimic the DB4Z in being comfortable yet Spartan, a reflection of the DB7Z's sporty nature and superior performance to the production DB7 Vantage.

It was Victor Gauntlett who first suggested that a new, smaller Aston Martin should be built alongside the big V8 Astons, a car that would, in terms, be a volume seller. The advent of the Ford Motor Company and the appointment of the late Walter Hayes as Chief Executive of Aston Martin not only provided new funding, but a renewed vigour in the person of Rod Mansfield who, as Engineering Director....
Continue Reading >>

A high-luxury, high-performance car, the Aston Martin DB7 is a sexy car that combines world-class comfort and speed into a hot little package. A British manufacturer of luxury sports vehicles, Aston Martin Lagonda Limited was founded in 1913 by Lionel Martin and Robert Bamford. Considered by many to be the most attractive Aston Martins of all, the DB7 is reputed to being the most successful model....
Continue Reading >>

The Aston Martin DB7 GT Zagato Concept was conceived at the 2001 Pebble Beach Concours d'Elegance during a meeting between the Aston Martin CEO Dr. Ulrich Bez and Designer Andrea Zagato, who were seeking to rekindle the collaboration that had resulte....[continue reading]

This 2003 Aston Martin DB7 Zagato 'Buck' ('master' in Europe) is made of Epo-wood over wooden box sections that are further mounted on steel beams with trolley wheels attached to allow it to be moved easily. The 'Buck' was used by Zagato in Turin to ....[continue reading]

In 1960, Zagato and Aston Martin built the DB4GT Zagato with a feather-light aluminum body. It made its debut at the 1960 London Motor Show and just 19 examples were produced. Over the next four decades, Aston Martin and Zagato would only team up twi....[continue reading]