28 years ago Volkswagen presented at the International Motor Show in Frankfurt the first GTI - and the legend began.

The world premiere of the first Golf GTI was in 1975 at the same position and also as a concept vehicle. In June 1976, series production began. What happened thereafter is the making of a legend. At the start, the vehicles were finished in either silver or red and were originally intended as just a limited edition of 5000 GTIs. But it turned out very differently. With a powerful 81 kW / 110 hp output and top speed of 182 km/h, the Golf GTI won a new clientele and established the GTI class as a compact sports car. From the original 5000 vehicles, more than four generations and more than 1.5 million Golf GTIs have evolved to date. 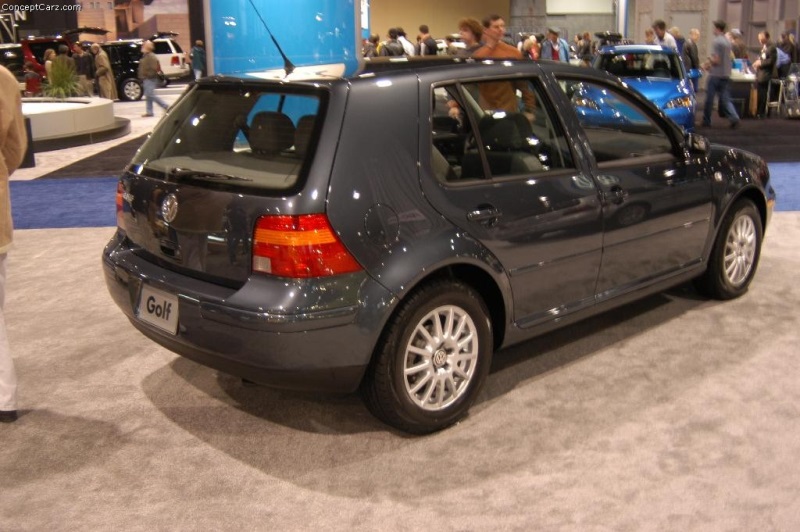 The concept emulates consciously the stylistic characteristics of the first GTI generation; which means, of course, that it is finished in red with black contrasting features.

With the Golf GTI concept, as shown in Frankfurt, Volkswagen is now demonstrating how GTI history will develop. The concept consciously emulates the GTI of the first generation. Therefore it has to be red, it has to have a black radiator grille, and it has to rise above the other models of the series with substantial modifications. After all, the first GTI also distinguished itself with a markedly independent appearance: The black bumpers and flared wings, the black side bump strips, the black rear window frame and the characteristic red trim around the black radiator grille of the original GTI are so clear today as if the vehicle had just yesterday been presented in Frankfurt.

As with all leading examples, the Golf GTI was copied by many. The models came in many shapes and forms, such as GSI, GTE, XRi, GTX, and disappeared from the market long ago. Not one of them came even close to the comparable status of a Golf GTI.

From this unmistakable GTI tradition evolved the new concept vehicle. Based on the majestic dynamics of the new model generation, the engineers and designers developed a GTI that accentuates the original version, whilst paving the way to the future with an extremely sporty, extremely independent and extremely well proven presence.

The concept combines traditional GTI features with the front end design of a future generation. Inline with the concept R roadster, presented on 1st September, the GTI also has a striking V motive in the design of the front end. The bonnet features an arrow shaped modulation, which continues the flowing lines in the area of the front skirt to form a frame for the shield-like, highly polished, black radiator grille. The radiator grille features a honeycomb mesh and is surrounded, characteristically for a GTI, by a red trim strip. 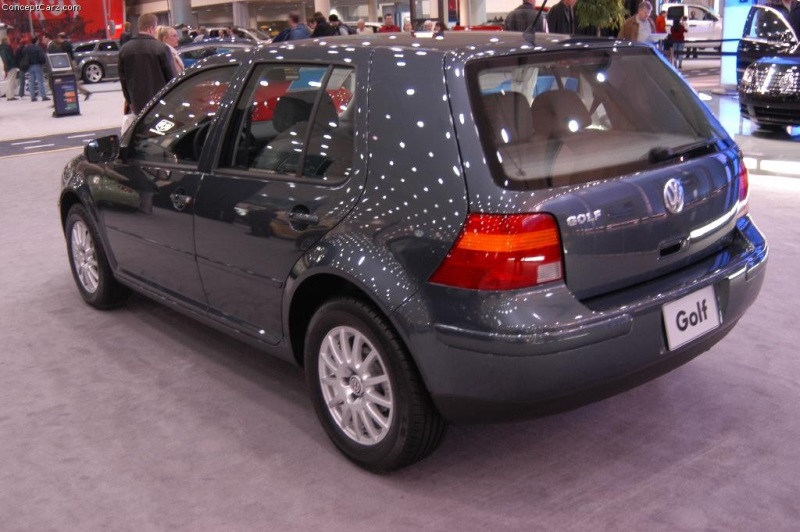 Beneath this are three large air inlets in the bumper that supply the new FSI turbo engine with fresh air. As in the radiator grille, each of the inlets have mesh panels with a honeycomb structure.

Furthermore, in best GTI style, the underside area of the vehicle features deep black body parts in the way of sill panels and end elements in the front and rear skirts. The sill panels are drawn high into the wheelarches to act as protection against stone chips.

In contrast to the Trendline, Comfortline and Sportline versions, the rear end makes its mark characteristically for a GTI with an even more striking roof spoiler and chrome twin tail pipes.

The interior design - cult status? This came about thanks to the exterior, the drive technology and the interior. The GTI concept of 2003 takes this history further. 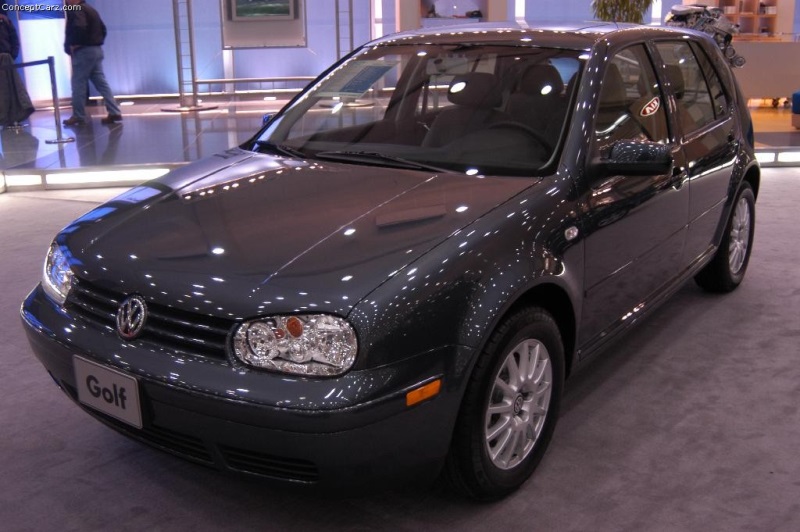 The original GTI did not just become a great hit with the fans due to its performance, its agile handling properties and exterior design, even its individually designed interior set new standards thanks to an ergonomic and sporty style. Details such as the sports seats, with legendary criss-cross design on black background, the three-spoked sports steering wheel or the gearstick knob shaped like a golf ball were the counterpoints that attracted a new sporty clientele.

Time flies: More noble than ever and catapulted almost three decades into the future, the GTI concept carries on this dynamic style further. With anthracite headliner and anthracite coloured pillar trim panels, the interior is characterised by markedly high attention to detail. As the doors are opened, the journey therefore starts in a new but familiar GTI world.

The sports seating features black matt and anthracite coloured suede and, in addition, the interior is refined with brushed aluminium

The entry step trim, pedals and floor panels of the concept are all finished in brushed aluminium. As an anti-slip measure, the aluminium is enhanced with rubber strips. The completely new leather sports seats (contoured single seats are also installed in the rear) have an ergonomically perfect and inviting appeal just by looking at them. Take a seat and the appeal is confirmed. The very high backrests, in particular, and adjustable head restraints, integrated here optically, create an ambience of extraordinary sporty functionality. Detailed perfection is a bonus: GTI logos are embroidered into the head restraints. The upholstery trim of the seats has also been newly designed: The main material used is black, fine suede. Running across this are narrow strips of perforated suede; the front surface of the head restraints is covered with this on the inner area.

As with the first GTI generation of 1976, this GTI concept of 2003 is also distinguished by a three spoke steering wheel with metal elements. The leather steering wheel features a brushed aluminium element in each of the spokes. A further GTI logo is embroidered in the vertical spoke. The moulded grips of the steering wheel, that is on the left and right of the cross spoke extensions, are covered in suede, similar to that used in the world of racing.

The instruments in the vehicle were also revamped. Their graphic layout and design give an image of technical precision in its highest form. Each of the round main instruments is surrounded by a ring of machined aluminium. The rev counter mounted on the left has an ample range up to 8000 rpm, hitting the red line area from 7000 rpm. This clear overview is continued with the scaling of the speedometer.

The constructive basis of the compact sports car is the fifth generation, 22 million bestseller Golf. The two door version, though, is more striking than ever in terms of the design compared to the four door, with a much higher waistline at the rear.

Technically, the GTI concept features all of the advantages of the Golf series that are generally set as the standard in its class. Included here are the extremely high quality bodywork, the new safety running gear designed for driving dynamics (including ESP and dual brake assist system), the new electro-mechanical steering, the efficient technology of fuel stratified injection (FSI) - enhanced in the case of the GTI with a turbocharger, and the spectacular direct selection gearbox (DSG). 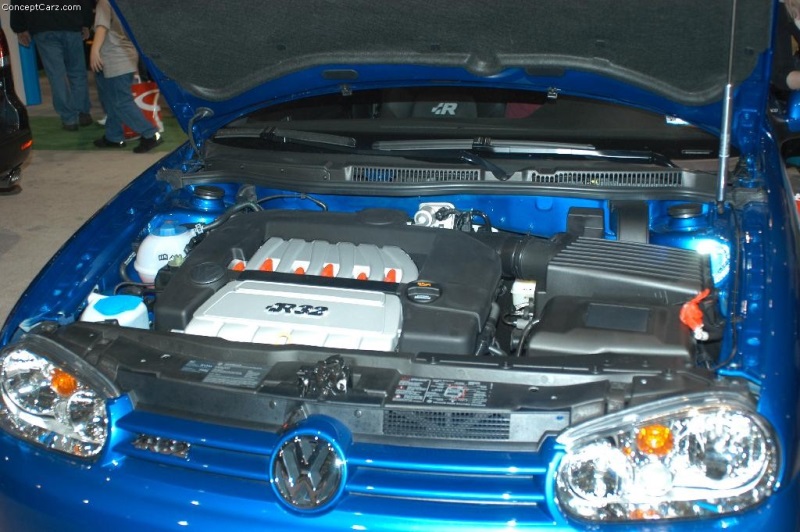 The question is now will the concept make it to series GTI production? The signs are extremely good. Relevant tests and preparations are underway. And the product launch date? Let's just say: If it's high-tech and outstanding performance, with the GTI philosophy in mind, that people are looking for, they will find it all at the 2004 Motor Show in Paris. The stage will then be set to make what we can expect of the GTI in the future, a GTI that we can have now.
Source - Volkswagen

The New Golf Is Now Also Available With A 1.9 TDI With 90 BHP

WOLFSBÚRG, Germany - Volkswagen has once again improved the Golf's engine range with an important addition: the 1.9 TDI with 66 kW / 90 bhp.

A new TDI entry-level vehicle which will round off the bottom end of the TDI range. For the Trendline option, with its comprehensive equipment level and Climatic, the new Golf 1.9 TDI costs 17 950 euros and can be ordered immediately. 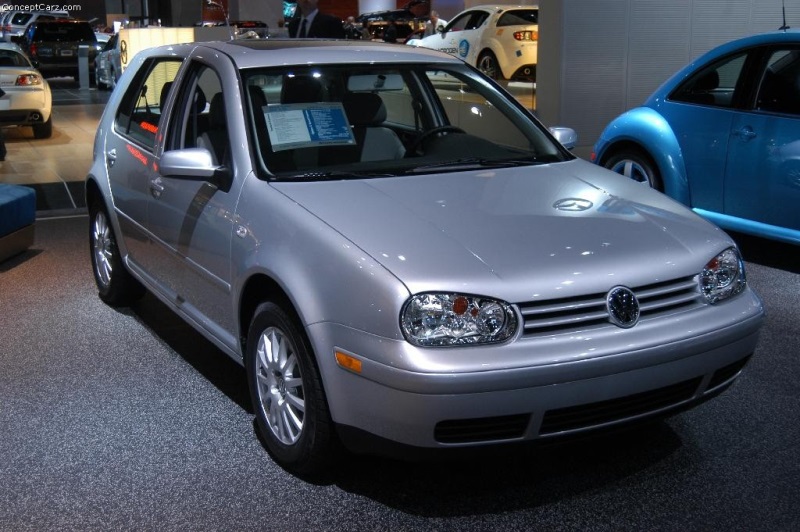 As can be expected, the new model is very economic. An average of 5.0 litres of diesel per 100 kilometres flow through the innovative direct injection unit injectors. The Golf 1.9 TDI also has tax benefits in Germany, as it, like all fifth generation Golfs, fulfils the stringent Euro 4 standards. ( posted on conceptcarz.com)

The equipment level is no different to the more powerful TDI engines. The Golf Trendline has the following features as standard: electro-mechanical power steering, easy-entry (2-door vehicles), remote control central locking, six airbags, active head restraints in the front, three head restraints plus centre three-point seatbelt in the rear as well as ESP with integrated ABS, EDL, TCS and brake assistant (Dual Brake Assist). For the Golf's 30th birthday, the semi-automatic air conditioner Climatic is also being included at no extra cost.Source - Volkswagen