The announcement of a new M car remains a rare and exciting occasion, and the launch of the new M6 in 2005 will reveal a potent new combination of BMW engineering and M power.

Hot on the heels of the new M5, and taking lightweight design solutions from the M3 CSL, the new M6 combines supercar presence with Grand Touring potential. Joining an exclusive club, the fourth new M car of the decade sets a new performance benchmark for a production car. The beauty of the M6 is also its ability to comfortably crush kilometres on a cross-country cruise.

Like its predecessor - the legendary 1985 M635CSi – the new M6 resets the sports GT benchmark, with supercar performance, dispatching the zero to 62mph sprint in 4.6 seconds and achieving a limited top speed of 155mph. If derestricted, the M6 would be capable of a 200mph+ top speed. During tests at the famous Nürburgring Nordschleife circuit, the new M6 regularly clocked eight minutes lap times. These rarefied performance statistics are, however, backed up by ‘real world' economy and efficiency - the new M6 delivers a combined EÚ fuel consumption of 19.0mpg and a CO2 rating of 357g/km.

Powered by the same 4,999cc engine that set new standards in the M5, the 507bhp power output ensures that the new M6 maintains the M car tradition of breaking the 100bhp per litre benchmark. Peak power is developed at 7,750rpm with the red line set at 8,250rpm. Peak torque of 520Nm is developed at 6,100rpm of which 450Nm is available from just 3,500rpm. The 90-degree V10 aluminium-silicon alloy engine block is extremely light yet robust and is the first V-arrangement engine to use a bedplate construction. The aluminium bedplate with cast-iron inlays ensures the engine's rigidity throughout the rev range, but the complete unit still weighs just 240kg.

The capable chassis of the new M6 permits lateral acceleration in excess of 1g. To cope with such forces, the V10 engine features a lateral force-controlled oil supply that, from 0.6g of lateral movement, activates one of two electronic oil pumps to draw oil from the cylinder head and delivers it back into the sump to ensure perfect lubrication even in the most extreme situations. It is because of the extreme forces that can be induced by the M6 that the car also makes use of a semi dry sump lubrication system with an oil reservoir on each side of the front subframe.

Like the M5, the new M6 also uses BMW's new third-generation seven speed Sequential Manual Gearbox (SMG) with Drivelogic. Drivelogic offers the choice of 11 different change patterns, depending on the speed of change required. Six change patterns are available in the manual mode and five in the ‘automatic' mode, in which the gearbox will automatically select the most appropriate gear depending on driving conditions.

The new SMG gearbox also offers safety benefits when downshifting on slippery surfaces. If it detects the rear wheels locking up, the clutch opens for a fraction of a second to ensure traction is maintained. Hill Detection is another SMG feature. In automatic mode, the SMG gearbox recognises that the car is travelling on an incline and holds gears uphill to maintain acceleration and selects lower gears when progressing downhill to make the most of the available engine braking.

The suspension of the new M6 is based on the ‘standard' 645Ci geometry. With the exception of components such as tie bars, wheel mounts and bearings, the double-arm spring strut front axle is made completely of aluminium. The Ú-shaped front subframe houses the rack and pinion steering assembly, anti-roll bar and track control arms.

Electronic Damper Control is also standard on the M6. Offering the driver three suspension settings – Comfort, Normal and Sport, drivers can select the most appropriate setting for their driving style or road conditions. The new BMW M6 also features a BMW M version of Servotronic steering with two specific settings corresponding to the Electronic Damper Control settings, Sport or Comfort.

BMW's DSC stability control system has been adapted for the M6. Featuring M Dynamic Mode (first seen on the new M5), drivers can take their cars to the limit of the laws of physics, allowing considerable angles of controllable oversteer when circumstances allow.

The new BMW M6 comes with a Power button (pioneered in the M5) in the centre console. Initially the car pre-selects the P400 setting, delivering 400bhp for town or city driving, for example. Engaging the Power button modifies the response of the throttle and enables the P500 setting to deliver the full 507bhp generated by the V10 engine.

Control of all of these features has been brought together using the M6's MDrive Manager. MDrive allows the driver to pre-select specific settings for the Power button, SMG gearbox, DSC, EDC and Head-up Display.

For a car with such potential, high performance brakes are needed and the new BMW M6 doesn't disappoint. Úsing aluminium double piston callipers and cross-drilled disc brakes, the car can stop from 62mph in just 36 metres and from 124mph (200km/h) in only 140 metres – equivalent to 1.3g deceleration.

Specially developed tyres ensure that the prodigious horsepower and braking power are transferred to the road. Measuring 255/40ZR19 on the front and 285/35ZR19 on the rear, the tyres are mounted on lightweight five-spoke

Like other 6 Series models, the new BMW M6 uses a hybrid construction of aluminium, thermoplastics and SMC (Sheet Moulding Compound). This mixture of materials delivers an extremely rigid, yet light, body structure. The front wings are made of thermoplastics, the doors and bonnet of aluminium and the boot lid, SMC. Like the legendary M3 CSL, but unlike the 630i and 645Ci, the new BMW M6 also uses carbon fibre in the construction of the roof panel to reduce the weight yet further – this feature alone saves nearly 5kg and contributes towards the overall weight of just 1710kg.

Visually, the new M6 differentiates itself from the 6 Series by a deeper front valance with air intakes for the engine and brakes, more contoured sills and rear valance that includes a diffuser to increase aerodynamic efficiency. Nestling under the rear valance are BMW M's telltale four rear exhaust pipes. To complement the changes in body styling, the new M6 is available in four exclusive M colours – Indianapolis Red, Sepang Bronze, Interlagos Blue and Silverstone alongside three other 6 Series colours.

Inside, the new M6 comes with fully adjustable M sports seats that include lumbar support and an adjustable backrest width as standard. They are covered in extended Merino leather, with the owner able to choose between Black, Silverstone or Sepang. As an option, full Merino leather can be specified in Indianapolis Red and Portland Natural Brown alongside the other three colours that includes a leather covered dashboard and Alcantara headlining.

The new BMW M6 also features BMW M's version of the new Head-up Display system. Únlike the standard Head-up Display available on 5 and 6 Series models that offers navigation instructions and cruise control information, the system on the M6 projects driver-focussed information such as engine speed, gear selected and road speed directly into the driver's view, obviating the need for the driver to take his or her eyes off the road ahead.

The new M6 will go on sale towards the end of 2005. Dates and prices will be announced in due courseSource - BMW Media

The BMW M6 was produced from 1983 through 1989. A second generation was introduced in 2004. The first generation sat atop a E24 chassis of the 6-Series and powered by a modified version of the BMW M1 engine. It was quick, aggressive, and well equipped. The US version of the engine produced nearly 260 horsepower and over 240 foot-pounds of torque. The European spec-engine did not have a catalyst....
Continue Reading >> 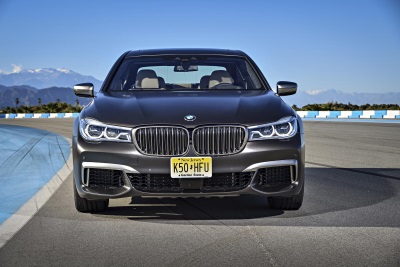 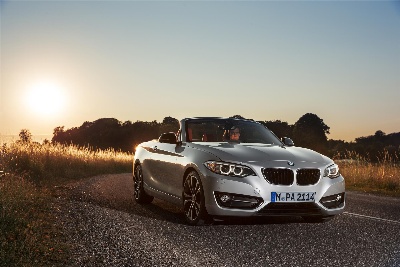