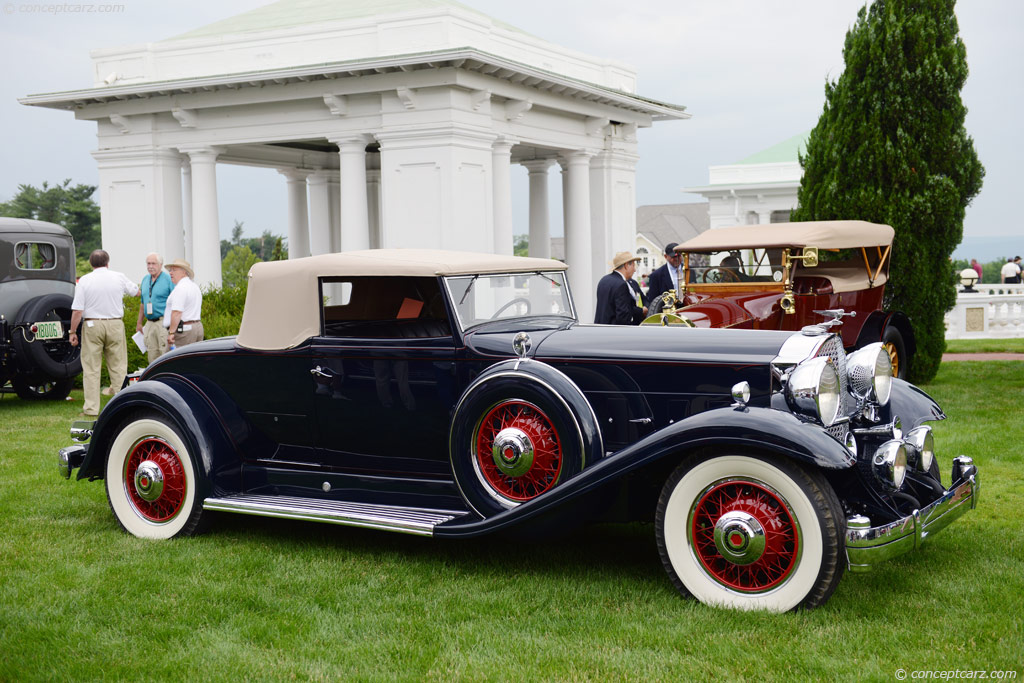 In 1932 the Packard Standard eight engine was updated with a redesigned manifold and fan. The compression ratio was increased to 6.0:1 and now produced 100 horsepower. A redesigned air cleanser improved both noise and vibration, and the fitting of new rubber engine mounts was accomplished by the driveshaft being jointed and rubber mounted. Both the components and the lengthened chassis were redesigned.

Created out of economic necessity, the Packard Light Eight was introduced in early 1932 and was the first newly designed Packard since 1923. It was also the first medium-priced Packard that was intended to sell in higher volume to help consumers in the luxury market ride out the Depression. Built with the same meticulous care as any Packard, the Light Eight sold for $500-$850 less than the Standard Eight.

Unfortunately though, despite its 'Light' name, the Light Eight used the same 320-cubic-inch engine that was in the Standard Eight, though it rode the shortest wheelbase, 127.5 inches. The Light Eight was sold in coupe roadster and sedan, four-door sedan, and rumble seat coupe.

All new Packard models for the 1949 model year featured a 'flow through fender'. The Packard station wagon was considered by many to be one of the most stylish wagons of the time period. For 1949 the Packard Standard Eight featured a fold down rear seat that made the vehicle quickly transform the station wagon from a functional utility vehicle into a passenger car.

The Packard Straight Eight was equipped with a three-speed manual transmission and was capable of producing 135 horsepower. Both the driver and the passengers enjoyed the bump-free smooth ride in the Standard Eight.

Between 1948 and 1950 only 3,865 Packard Station Sedans were ever produced. Today this vehicle is an extremely collectible piece of the Packard Motor Car Company legacy.

The 1950 Packard Standard Eight featured avante-garde styling along with strong, sturdy vertical wooden slats on the doors. The ‘woodie wagon' was formed by taking a six passenger sedan from the assembly line, then changing the roofline and trunk lid. Briggs Manufacturing Company transformed the once sedan into a complete station wagon. The Packard Standard Eight featured 288 cubic inch straight eight.By Jessica DonaldsonThe Packard Motor Company relied on making luxurious cars that were highly refined, fitted with luxurious coachwork, and powered by proven engineering. This belief had placed them among the elite in the auto industry during the early 1900s. As the world entered the Great Depression, the Packard Company was one of the few that managed to survive. In fact, they outsold all of their competitors combined. They had entered the Depression in excellent financial health and they emerged with strong financial footing. But the post depression era had them worried, as the number of potential buyers had dwindled as fortunes were lost. Production had dropped nearly half each year when compared with the previous, from 1929 to 1933. In response to the decline, Packard continued to make improvements each year.

The Ninth Series of Packards were announced on June 20th of 1931, at a meeting of around 600 dealers and distributors. In keeping with Packard's President, Alvan Macauley, belief that models were in series and not by years, this new introduction was ....[continue reading]

The dual cowl phaeton was the ultimate open air sporting accommodation for four passengers. Protected by their own second cowl and windshield, passengers in the rear seat of this Packard had their own cozy space, which was comprised only by somewhat ....[continue reading]

This car featured standard fender lamps and dual trumpet horns mounted under the headlights. The transmission had synchromesh with a vacuum clutch for easier gear shifts. Top speed was 85+ mph with a zero-to-sixty mph in 18.8 seconds.....[continue reading]

As the Great Depression deepened Packard sold only 960 Eight DeLuxes in 1932, and this snappy Dual Cowl Phaeton features one of the rarest body styles. The second cowl and windshield provided weather and wind protection for the rear seat passengers -....[continue reading]

After a bad experience with the Winton automobile he purchased, James Ward Packard declared to the Winton Company he could build a better car. On November 6 1889 the first Packard automobile emerged from the New York and Ohio Company in Warren Ohion.....[continue reading]

For 1932, Packard built fewer than a thousand Deluxe Eight models. It is believed that this Sport Phaeton was once the property of Richard Parker and later John Pascucci who would sell the car to Frank Moldery. The next owner was Thomas Derro of Carl....[continue reading]

Packard introduced its Ninth Series in June of 1931, nearly eight months ahead of the typical new model introduction. The Standard Eight Series 901 and 902, the Deluxe Eight Series 903 and 904, and the Individual Custom Eight, also under the Series 9....[continue reading]

Packard introduced its Ninth Series in June of 1931, eight months ahead of the typical new model introduction. The 903 Deluxe Eight Series received significant updates over the preceding Eight Series and saw Packard move from a 4-speed crash gearbox ....[continue reading]

This ninth series of Packard motorcars was first introduced at a meeting of dealers and distributors in June of 1931. The most striking visual change was the V-shaped radiator and the new harmonic stabilizers at the end of the bumpers to dampen chass....[continue reading]

Only 311 Super 8 Packards of all body styles were built in 1932. Only 12 genuine Super 8 Coupe Roadsters exist today and it is one of the most iconic Packards of the early 1930s. This car is equipped with dual side-mounts and special metal top coveri....[continue reading]

Packard of New York first delivered this car in October of 1931 to an owner on Fifth Avenue by the name of Robinson. The five men who built the car signed it on the firewall and their names were spared during the restoration of the car in 1967. The c....[continue reading]