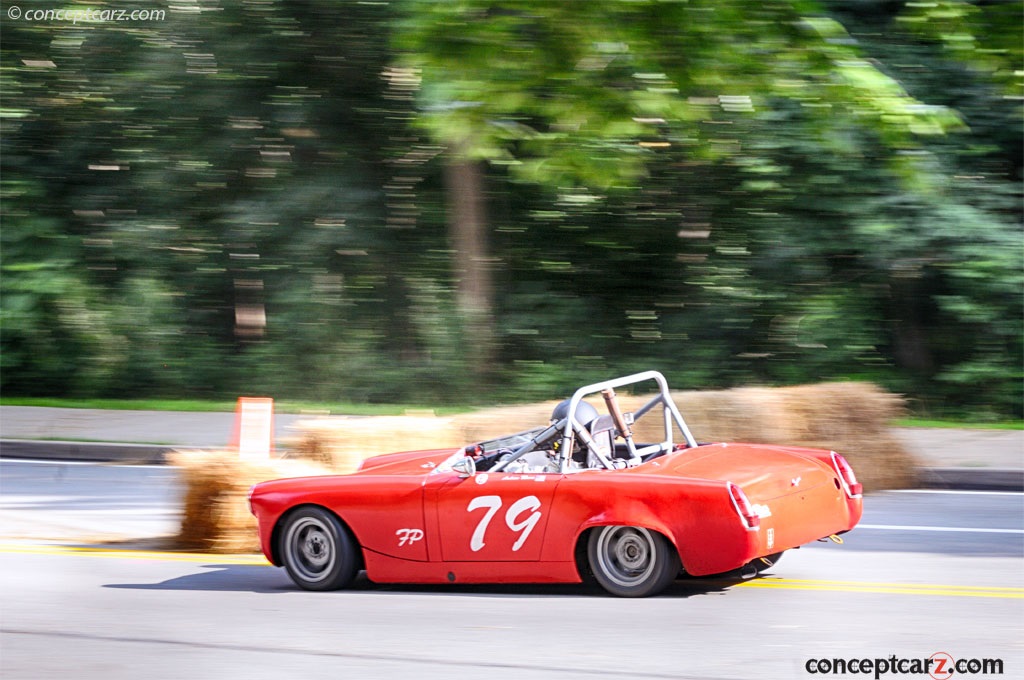 The Austin-Healey Sprite was produced from 1958 through 1971 with 129,347 examples of the two-door, low-cost, open roadster produced. The car was designed by the Healey Motor Company, more specifically Donald Healey, and produced in partnership with the British Motor Corporation. There were four series of the Sprite. The first series was produced from 1958 through 1961 with approximately 49,000 examples produced. In the United States, these were given the nickname Bugeye while in the UK they were called Frogeye. The name evolved from the headlights mounted on the top of the hood resembling a frog and/or bug. Concealed flip-up headlamps were in the original drawings but high production costs canceled those plans. The body was very smooth and flowing. There were no door handles; to open the door, the inside handle would need to be operated. This meant that the doors could not be locked. The trunk did not open - to gain access to the trunk the back seats would need to be folded down. Housed inside the trunk was the spare tire. The entire front hood hinged upwards, allowing easy and convenient access to the engine. The mechanical components were borrowed, in an effort to save production costs, from a number of vehicles already in production. The suspension was from the Austin A-35 while the engine was courtesy of the Morris Minor. The 948 cc engine was based on the Morris Motor Company A-series but fitted with dual SU carburetors increasing the horsepower from 37 to 43. Coil springs and wishbones were in the front while the rear was a semi-elliptical leaf spring configuration. A rack-and-pinion steering unit controlled the car, drum brakes provided the stopping power, and a four-speed manual gearbox sent power to the rear wheels.
The second series, the Mark II, was produced from 1961 through 1965. The 948 cc engine continued to power the car until 1964, with an optional 1098 cc A-series engine coming available in 1962 and lasting until 1964. The 1098 cc engine produced nearly 60 horsepower and had the same bore and stroke as the Morris Minor 1000. Front disc brakes were fitted on vehicles with the larger engine. Wire wheels were optional equipment.
The lights were the largest change with the rear headlights sharing the same design as the soon to be produced MGB. The front headlights were repositioned causing controversy with their faithful supporters. Also controversial was the newly introduced rear bumper bar. The Sprite Mark III was produced from 1964 through 1966 with nearly 26,000 units produced. The Mark III is also known as the Mark II MG Midget. There were little changes to this version in comparison to the prior versions. Wind-up windows and exterior door handles were much-welcomed luxury items. The rear suspension was changed to a fully elliptical leaf-spring configuration. A new grille adorned the front while the body detailing changed slightly. The tried-and-true 1098cc engine remained, though it now had a stronger block casting and the size of the crankshaft main bearings was increased. The 1098 cc engine continued to be produced until 1966. It was replaced by a 1275 cc four-cylinder engine that produced 65 horsepower. This version was dubbed the Mark IV which remained in production from 1966 through 1971.There were a total of 22,790 examples of the Mark IV produced. The MKIV's cousin was the Mark III MG Midget; both saw cosmetic changes over the versions they replaced. Some were minor aesthetic updates and others were more substantial. Probably the most significant was the change to a permanently-affixed roof, in place of the removable convertible top. The Sprite was a popular vehicle because it was small, sporty, and very economical, with the original versions costing about $2000. They were easy to maintain and had superb handling. Though zero-to-sixty took about 21 seconds and top speed was just under 80 mph, this was respectable for a 1960's vehicle. Most of the Sprites were exported to the United States. They often differed from their European counterparts as the US versions were forced to comply with safety restrictions and federal emission control requirements.
By Daniel Vaughan | Jul 2008
Concepts by Austin-Healey