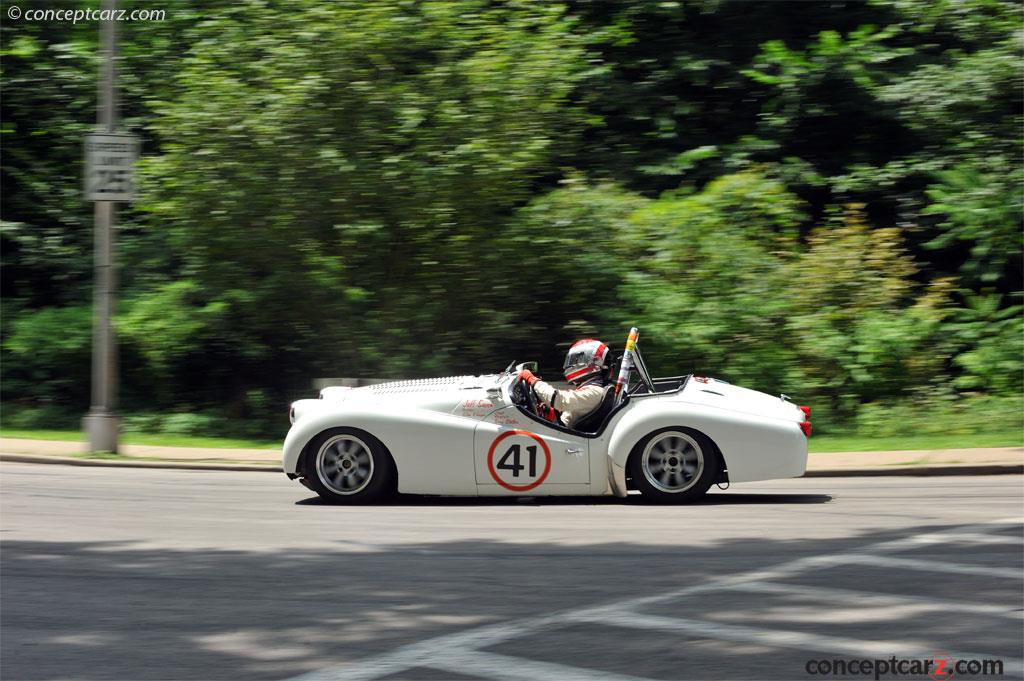 Triumph introduced the TR2 in 1953 at the Geneva Motor Show with the purpose of offering an alternative to the MG, Jaguar and Triumph sports cars. It was given a separate chassis with an independent suspension with coil springs in the front and a leaf spring live axle setup at the rear. Wire or disc wheels could be fitted and concealed Lockheed drum brakes at all four corners. The engine was a four-cylinder Standard wet liner inline four-cylinder unit from the Vanguard, fitted with twin H4 type SU carburetors and tuned to offer 90 horsepower. It was backed by a four-speed manual unit with optional top gear overdrive. Production of the TR2 lasted until 1955 when it was replaced by the TR3 after 8,636 examples had been produced. Production of the TR3 lasted from 1955 to 1962 with approximately 74,800 examples sold across all variants. Most of the TR3 models were open two-seaters, however, a few were ordered with the optional occasional rear seat and bolt-on steel hardtop. The chassis was the same used by the TR2, TR3, TR3A, and TR4. Power was from the Standard wet, overhead-valve, inline-four displacing 1991cc and offering 95 horsepower, an increase of 5 horsepower over the TR2 due to the larger SU-H6 carburetors. The horsepower later rose to 100 bhp with the help of an additional 'high port' cylinder head and enlarged manifold. The four-speed manual gearbox could be fitted with an overdrive unit on the top three ratios, electrically operated and controlled by a switch on the dashboard. The suspension was comprised of double A-arms, coil springs, manganese bronze trunnion, and tube shocks at the front. An anti-roll bar was optional. The back had conventional leaf springs, with a solid axle and lever arm dampers. Steering was controlled by a worm and peg set up, and the wheels measured 15 inches in diameter and 4.5-inches wide. The 48-spoke wire wheels were optional equipment.
In 1956, the front drum brakes were replaced by discs. The following year the TR3 was updated with several changes including a full-width radiator grille, exterior door handles, a full tool kit was standard equipment, and there was a lockable boot handle. This updated model is commonly referred to as the Triumph TR3A, although they did not wear badging to indicate as such and was not officially used. The 'TR3A' version was built from 1957 to 1962 with 58,236 examples built.
In 1959, a few more changes appeared including a redesigned rear floor section and raised stampings under the bonnet and boot hinges and under the door handles. The Dzus connectors used to attach the windscreen were replaced with bolts. More changes in 1962 brought about the unofficial 'TR3B,' which was offered concurrent with the TR4 which had started production in 1961. The TR3B had the TR3A body.
By Daniel Vaughan | Feb 2020

In 1957 the Triumph TR3A was introduced as a replacement for its predecessor, the TR3. The 3A featured improved design and mechanics, resulting in a top speed of 105 mph. The TR3A was a reliable vehicle this was proven in 1960 during the grueling Le Mans 24 Hour race where three cars were entered and finished, placing ninth, eleventh and fifteenth. The vehicle featured a four-cylinder, 95 horsepower....
Continue Reading >>