For three generations and over 50 years, the Cooper name has identified a MINI offering even more in the way of driving fun. The idea, hatched by brilliant Formula One designer John Cooper, to fuel the agile small car with an extra hit of performance and turn it into a sporting machine for the road and track has lost none of its appeal. But the Cooper has never been about horsepower, as a comparison between the classic Mini and its two successors resoundingly proves. The key here is the basic principle of the creative use of space, combined with the inimitable go-kart feeling that runs like a thread through the three generations of the legendary small car. These famous handling traits are enjoyed by drivers on bendy country roads and city streets around the world, with the classic Mini and 21st-century MINI still regularly crossing each other's path.

The small British car positively craves twists and turns demanding quick and precise changes in direction; this is where it feels most at home. The classic Mini was tailor-made for tackling hairpins and corner-strewn roads, and it still looks the part today – aided by the healthy 46 kW/63 hp available in a Mini Cooper towards the end of its production run. The classic Cooper was built up to autumn 2000, by which time its successor was already twitching in the starting blocks. In contrast to the original Mini, the new model was available in Cooper guise from the outset. And with 85 kW/115 hp under the bonnet, it would do its nameplate proud. From the word go, the car's powerplant and chassis formed a harmonious alliance to deliver unbeatable driving fun. As John Cooper realised, sometimes you actually can't have too much of a good thing. 50 years ago he unveiled the 70 hp Mini Cooper S. And today, its youngest descendant places 135 kW/184 hp at the disposal of its driver. As if that wasn't enough, the turbocharged engine powering the latest MINI Cooper S also sets the benchmark for efficiency in its output class.

When Alec Issigonis set out to develop a new small car for the British Motor Corporation in the mid-1950s, his priorities were space and price. Indeed, at a touch over three metres in length, the classic Mini offered astonishingly generous accommodation for passengers and their gear alike. Issigonis settled on a front transverse installation for the four-cylinder engine, under which lay the gearbox, plumb between the wheels. The positioning of those wheels at the far corners of the car and the Mini's short overhangs did the rest. The Mini was small on the outside but roomy on the inside, not to mention – at around 600 kilograms – extremely light. The principles underpinning its design remain the template for small and compact cars in the modern era. 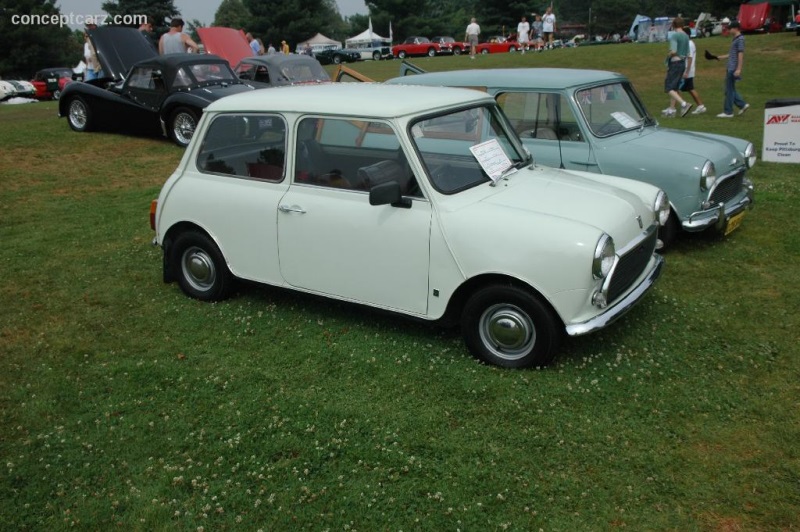 However, it was left to another key figure in the brand's history to uncover the vast well of sporting talent under that diminutive shell. John Cooper, a friend and business partner of Mini creator Issigonis and winner of two Formula One constructors' world titles, was quick to spot the car's dynamic potential, and in 1961 the first Mini Cooper hit the roads. Production of the Cooper was temporarily suspended in the 1970s, but by that time the Mini Cooper badge had long since become the signature of a sporty and agile small car.

As well as the intervention of John Cooper, the launch of this famous sporting career also relied on the brilliance of the classic Mini's chassis. Issigonis had broken new ground with the steering and suspension of his new creation, and in so doing laid the foundations for the go-kart feeling appreciated by drivers to this day. Homokinetic joints reduced torque steer, a subframe (to which the rear wheels were fixed) improved directional stability, and rubber springs and small telescopic dampers ensured accurate responses and progressive spring action. The wealth of ideas packed into this small car still impresses. And the result of those ideas – the classic Mini's much-celebrated handling – explains why the car continues to enjoy such a loyal community of fans. When the successor to the original car came along in 2001, it was clear that highly advanced chassis technology would be needed in order to set the pace in driving fun all over again. The MINI Cooper rose to the challenge in some style, thanks to MacPherson spring struts at the front axle, axle shafts equal in length, a multi-link rear axle unique in the small car segment, disc brakes on all four wheels, and DSC (Dynamic Stability Control).

The latest-generation MINI Cooper S also features Electric Power Steering with Servotronic function and a DSC system including DTC (Dynamic Traction Control) and an electronic locking function for the front axle differential. Known as Electronic Differential Lock Control (EDLC), this system gives the MINI a crucial edge through the tight bends of Alpine passes, for example, by braking a spinning wheel as required to enhance drive out of corners as well as the car's steering properties. Added to which, pressing the standard Sport Button in the MINI Cooper S makes the steering even more direct and stirs up a particularly sporty soundtrack from the engine. All of this was unimaginable 50 years ago, of course, but you get the impression John Cooper would have wholeheartedly approved.Source - BMW