Ferruccio Lamborghini had built a significant amount of wealth as a tractor builder. When he bought a Ferrari he expected a vehicle with superior performance and few problems. What he got was a car that did have superior performance but was plagued with mechanical difficulties. Upon returning the vehicle to the Ferrari shop and complaining about the lack of build quality, Enzo Ferrari replied 'You should stick with building tractors and let me concern about the cars.' Ferruccio was so enraged, that he began a new quest - to build proper supercars that had performance and quality.Bizzarini, a brilliant engineer, had just left Ferrari and was a suitable candidate to build Lamborghini a twelve-cylinder engine. Franco Scaglione, an employee of Sargiotto located in Turin, was tasked with designing a new vehicle for the newly formed Automobili Ferruccio Lamborghini S.p.A. Scaglione's resume included work such as the Alfa Romeo BATs and the ATS 2500 GT. Sargiotto Bodyworks were responsible for the metal work while Neri & Bonacini were given the task of building the square tube steel chassis. The result was a prototype labeled the Lamborghini 350 GTV and first displayed at the 1963 Turin Auto Show. The interior was leather while the finish was a bright metallic blue color. The engine was not installed in the car because it would not fit. The vertical carburetors were too large and did not fit under the hood. Only recently has the vehicle been restored and the chassis was altered to allow room for the engine.After the Turin Show, Carlo Anderloni of Touring was brought in to redesign the 350 and prepare it for production. The design was smoothed out and the pop-up headlights were replaced with units that were gracefully incorporated into the hood of the vehicle. The 3.5-liter V12 with twin overhead camshafts and six twin-choke Weber carburetors was placed horizontally between the camshafts in order to fit under the hood. Along with the redesign, the engine was detuned because Ferruccio Lamborghini desired a smooth running, refined engine rather than a highly-tuned racing power-plant. Horsepower dropped from 350 to 270. A 320 horsepower version was available as optional equipment.
In 1964 Ferruccio Lamborghini debuted the production version, the 350 GT, the V had been dropped, to the public at the Geneva Auto Show. The car was powered by a Giotto Bizzarini designed 12-cylinder engine, sat atop a tubular steel chassis, and featured independent suspension and a ZF gearbox. Disc brakes were placed on all four tires. This was Lamborghini's first serial-production GT vehicle. Producing 280 horsepower, the 350 GT was a formidable contender with the other super-cars of the day.
Two shortened chassis's were sent to Zagato, renowned for their lightweight construction, to create alternative creations to the Touring design. Ercole Spada of Zagato was given the task of designing the body. The result was a very elegant coupe that drew inspiration from previous work such as Lancia and Alfa Romeo racers. It was shown at the 1965 London Motor Show under the name Lamborghini 3500 GTZ. Only two examples were ever created. One was retained by the factory while the other was sold to a customer after the show. Another coachbuilding factory was commissioned in the mid-1960s to create a mid-engined supercar. It was known as the Miura and was powered by a four-liter V12. In 1966 the four-liter engine was available in the front-engined Lamborghini as optional equipment. This version became known as the 400 GT. A few examples were built before it was replaced by the 400 GT 2+2. The two-plus-two configuration made the supercar a little more practical, allowing room for additional occupants in the rear seats. The design of the 2+2 varied slightly from the 400 GT. The 2+2 was constructed of steel while the 400 GT used aluminum. The most distinguishable difference was the double-oval headlights in the front of the 2+2. In 1966 a Lamborghini 400 GT Monza prototype was created that carried the mechanical components of Lamborghini with styling reminiscent of Ferrari's legendary 250 GTO series. The design was handled by Neri & Bonacini and was shown to the public at the 1966 Barcelona Motor Show. It was sold to a wealthy Spanish individual who used the vehicle as a daily driver. It was put into storage in the early 1970's with the odometer reading just 7,000 km's. It remained in possession of the family until the owner's death in the mid-2000's. Bonham's Auction had the pleasure of offering the vehicle up for auction at the 2005 London Olympia sale where it was sold for $315,000. During its introductory year, only thirteen examples of the 350 GT version were created. Around 120 examples were created in total and all were mostly hand-built. Since these were mostly hand-built, specifications and designs may vary. For example, most of the 400 GTs intended for the US market were given four round headlights, however, a few had larger oval units that were common on the 350 GT. There were about 224 examples of the 400 GT 2+2 constructed. Five examples being right-hand drive. The 350/400 GT Series represent Lamborghini's intention to construct the finest Grand Touring autombiles ever assembled. Many automotive journalists at the time hailed the cars as being better than equivalent exotic machinery.
By Daniel Vaughan | Dec 2006 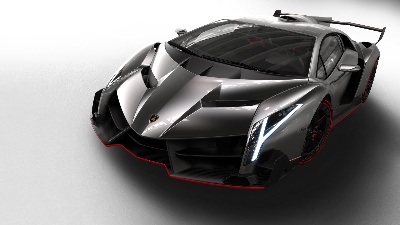 HERNDON, Va. (August 13, 2013)–– In celebration of its 50thAnniversary, Lamborghini will host the North American debut of its one-off Veneno show car and a rare display of its first-ever prototype,...
© 1998-2020. All rights reserved. The material may not be published, broadcast, rewritten, or redistributed.