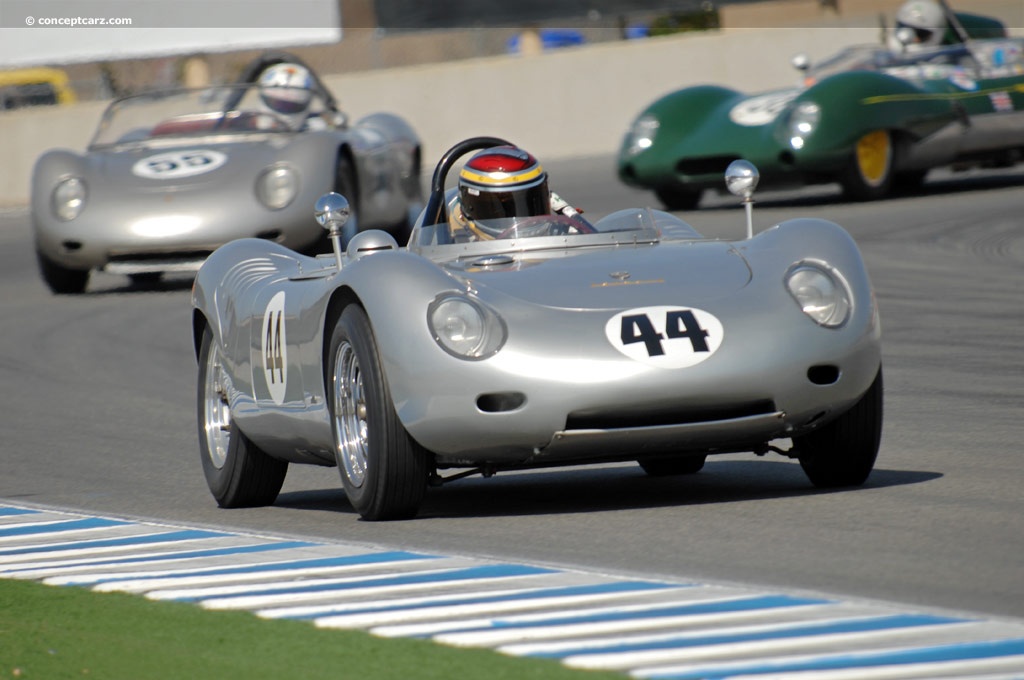 Prior to World War II, the German government had begun development of the 'people's car,' conceived as the KdF-Wagen (Kraft durch Freude, Strength through Joy), the Volkswagen. It was a utilitarian vehicle with two doors and powered by a 985cc engine developing 24 horsepower. Its design potential was demonstrated when in 1939 Porsche was asked to build a streamlined coupe version on the Volkswagen platform. The purpose of the Typ 60K10 was to compete in a proposed race from Berlin to Rome. However, the September 1939 date never transpired due to the German invasion of Poland on September 1.

During the war and between war contracts, the Porsche design bureau pursued competition projects. Following the war, a contract was obtained to design a Grand Prix car for Piero Dusio's Cisitalia. The resulting design and mechanical configuration reflected much of the work Porsche had done pre- and during- the war.

Typ 356
1948 brought about the Typ 356, number according to the succession of Porsche designs projects (the KdF-Wagen of a decade earlier was design number 60). The Typ 356 proceeding significant design and development work, bringing the Porsche sports car into a reality. Using inspiration from Piero Dusio's production racing cars, the D46, and sports cars, the 202, Porsche's latest design project was intended to be a low production Volkswagen sports car. Instead of a rear-engine layout, it used a mid-engine configuration with the engine located behind the driver and in front of the rear axle, similar to the Auto Union Type C and D, and the postwar Cisitalia Grand Prix cars. It used a tubular space frame chassis with a Volkswagen-sourced trailing arm torsion bar front suspension, but with the driveline and rear suspension turned around, the torsion bar trailing arms became leading arms attached to a frame extension. The 1,131cc engine received a higher compression ratio, dual carburetors, and modified cylinder heads resulting in 40 horsepower. Porsche's Irwin Komenda penned the roadster body and many of the design cues would continue on future Porsche models.

Due to the labor-intensive process of hand-building the tube frame automobile, the mid-engined 356 roadster was replaced by a new Volkswagen-based design called the 356/2.
Typ 547 Engine
The 4-cam Typ 547 engine, designed by Ernst Fuhrmann, was introduced in 1952 and first used in April of 1953 in an updated 550 Spyder chassis. The engine design allowed for large intake and exhaust valves in the hemispherical combustion chambers, with the four overhead camshafts driven by shafts and bevel gears operating valve stems through interposed fingers. Three roller bearings rotated the 10-piece crankshaft built by Hirth and the connecting rods, with all moving parts lubricated by a dry sump system with an external reservoir. Air cooling was employed primarily to the cylinder heads and a large oil capacity helped with engine cooling. Combustion was through dual spark plugs with dual coils and distributors.
Typ 550 Spyder
The 550 Spyder chassis used a ladder frame with tubular side members that was underslung at the rear, with the tried-and-true torsion bar trailing arm front suspension working in concert with a new torsion bar-sprung trailing arm rear suspension. Among the accolades achieved by the 550 Spyder was a class victory in the 1954 Carrera Panamericana piloted by Hans Herrmann. Near the close of 1954, Porsche began building 'production' Spyders for direct sales to customers, known as the 1500/RS Spyder. They wore coachwork by Wendler and came with a ZF-built fully synchronized 4-speed transaxle, and the Typ 547 4-cam engine.

The next iteration of the 550 was the 550A, complete with a lightweight space frame chassis of thin wall tubing. It weighed 95 pounds and 3x stiffer in torsion and 5x stiffer in bending than the preceding chassis it replaced. This eliminated the need for body mounting structures and reduced body weight by 30-percent from the 550. The improved Typ 547 engine, which now drove the distributors directly from the front of the crankshaft, developed 135 brake horsepower with Weber carburetors. The rear suspension used a low-pivot design with a lower roll center, and longer trailing arms helped while cornering by reducing camber change.

The Porsche 550A finished fifth overall and first its class at Le Mans, and was first to the finish line the Targa Florio in 1956.
Porsche 718 RSK
Next came the RSK, the ultimate development of the Spyder, raced by Porsche between 1957 and 1962. It earned the nickname 'RSK' due to its front suspension torsion bar tubes sloping down to meet the lower torsion bar tubes at their mid-points, forming the letter 'K.' This design was created to help with cornering, but it did not survive testing, however, the nickname continued. The 'K'-shaped setup was replaced by parallel torsion bars, but the steering box remained at the center of the front track with equal length track rods. A benefit of the double U-joined steering column was the ability to have the steering wheel mounting position offset or centered. The rear suspension was redesigned with Watt's linkage replacing the prior trailing arm setup with two radius rods, one from the top and the other from the bottom of the hub securely positioning the rear wheels. Tubular shock absorbers with concentric coil springs replaced the rear torsion bars.

Changes were made to the body, making it slimmer, lower, and with a rounded nose. Due to the number of significant changes, Porsche gave it a new project number, 718.

It was initially a two-seater 1.5-liter sports car that was later adapted to compete in a number of different formulas. Due to regulation changes throughout the years, the car was updated and changed to comply with the new rules.

In 1957, Formula Two was reinstated as the Junior Formula to Formula One. The rules called for un-supercharged 1500cc engines with full envelope or open-wheeled cars eligible. Porsche achieved success with both G50s and RSKs.

The racing debut for the Porsche 718 was in 1957 at the 24 Hours of LeMans where it was piloted by Umberto Maglioli and Edgar Barth. Unfortunately, the car failed to finish the race due to an accident. It returned to LeMan a year later where it finished third overall and first in class. The class winning car, finishing third overall, was powered by a Weber carbureted 1,587cc Typ 547/3 engine and driven by Jean Behra and Hans Herrmann. Later in the season, Behra finished fourth at Riverside in the Los Angeles Grand Prix for sports cars.

At the Targa Florio, Jean Behra finished second and a year later, it was the overall winner at the race. A 718 also won the European Hill Climb Championship in 1958 and 1959.

35 RSK Spyders were built with approximately six with center-steering, with four factory-built with the combination of center- and offset-steering in the same car. The adaptability, design pedigree, and racing lineage resulted in an enviable competition record. It was a true giant-killer and continued the foundation and evolution for future success, and set the tone for four decades of competition dominance during the pinnacle of international sportscar racing.
by Daniel Vaughan | May 2011
Vehicle Profiles

It is rare to find, or even think of, a more evocative spyder design than that which would be produced by Porsche in the late 1950s. Many would consider the 356 and 550 striking, compact spyder designs. However, the 718, which would come online mid-w....[continue reading]

This rare Porsche represents one of only six RSK center-seat racing cars ever built. Based on input from factory race car drivers, Porsche made a decision to develop the RSK to compete in both Sports Car and Formula Two racing. To accomplish this, ....[continue reading]

The 718 was a development of the successful Porsche 550A, with improvements being made to the body work and suspension. The car is a Rennsport build with a wheelbase shorter (German 'Kurz') than is typical of predecessors of the era, and this led to ....[continue reading]

The Porsche 718 RSK was introduced in 1958 and soon became known as a giant killer often beating much larger engined Ferraris and Aston Martins. Its best result was at LeMans in 1958 with a 4th place finish. This car was especially built as a hill cl....[continue reading]

The Porsche RSK, with internal designation Type 718, replaced the 550A. They had streamlined Wendler coachwork which was more modern than its predecessor, with faired-in headlamps, and lower aerodynamic drag. Additionally, they had more power, an imp....[continue reading]

The RSK, was an updated version of Porsche's first true racecar, the 550A, which had repeatedly won its class at LeMans. While the RSK still used the 550's 1.5-liter engine from the 550A. It employed a revised suspension, which lowered the car's aero....[continue reading]

The original owner was Ed Hugus a race car driver of the 1950s. In the 1959 Le Mans race, Ed and co-driver Ray 'Ernie' Erikson were running first in class but retired after 20 hours with a broken crankshaft.....[continue reading]

Internally designated as Type 718, the RSK replaced the 550 A in 1957. It had a modern and streamlined design with faired-in headlamps, and lower aerodynamic drag than its predecessor. It came with more power, an improved suspension, and better braki....[continue reading]

This Porsche RSK is one of the four cars built in 1959 with center steering, making it eligible to race as a sports car and a single seater. It was raced by Dutch Porsche privateer Carel Godin de Beaufort.....[continue reading]

This Porsche 718 RSK Spyder was sold new to American Bernie Vihl and driven by racer Bob Holbert in SCCA events beginning in the spring of 1959. It was driven to victory at the 2-litre Governor's Trophy race during the Bahamas Speedweek and two days ....[continue reading]