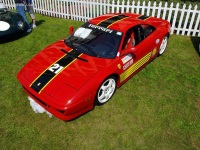 Ferrari 488 Challenge
The heritage of Enzo Ferrari has always been about racing. The road going cars he created were primarily for financial support to fuel his racing program. The road cars were created in close specifications and dimensions to the racers allowing privateers to drive their cars to the track and race them.

The Challenge Series cars are not production vehicles but identically prepared race cars outfitted with the necessary safety equipment. Found within the cockpit are the standard modern safety equipment such as roll cages, fire suppression system, and safety harnesses. The engine is left completely stock with the only mechanical updates occurring on the suspension and the brakes. The result is a nearly stock Ferrari, with ample safety equipment, and identical specifications across the board. This creates a competitive forum for the owners to rely on their skill and abilities to negotiate their machines around the track faster than the others.

The first Challege series Ferrari was the 348 which was later replaced by the 355 near the close of the 1990s. The 355 was superseded by the 360 in 2000 and has recently been replaced with the 430. The 360 Challenge Stradale was a derivate of the Challenge Series vehicle, sold in limited numbers, and capable of being driven on the street. Just like the Challenge Series vehicle, it is void of amenities and luxury items except for air conditioning. The interior is without proper sound insulation and carpeting, all in an effort to reduce the weight of the vehicle.