This is the only surviving example of three Cisitalia 202 coupes bodied by 'Vignale' to the Pininfarina design.Italian Cisitalia agents Lombardi & Kolliker were specially commissioned in 1950 to build the three 'Vignale' bodied Cisitalia coupes. Of the other two 'Vignale' Cisitalias, one was fitted with a six-cylinder Fiat engine and was subsequently demolished. The third car was destroyed in a fire.The Cisitalia 202 Gran Sport is regarded by many as the first modern GT car. Originally designed by the Italian car designer Pininfarina in 1946, this was considered an aesthetic and technical achievement that changed the shape of post-war automobile body design. Noticeable styling points are bolder sweeps and curves, modern flush-fender sides, unusually large glass area, a simple front end and flush door handles. In 1951, New York's Museum of Modern Art declared the Cisitalia 202 Gran Sport as one of the 10 best automotive designs of all time and brought one for permanent display.
Prior to World War II, Italian industrialist Piero Dusio had proved his abilities in amateur racing competition. He had a passion for racing and talent to back it up. More importantly, he had the financial means to create his own sports car and to compete in more competitive arena's. He had done well with the Consorzio Industriale Sportivo Italia which was a conglomeration with interests in various industries such as sporting goods, banking, and textiles. When World War II emerged, his dreams of building racing cars were put on hold. At the conclusion of the War, he convinced Dante Giacosa and Giavonni Savonuzzi to aid in the creation. Both of these individuals were renowned engineers who had worked with Fiat and were more than capable of building a competitive racer.The first creation of the Cisitalia Company was the D.46 monoposto powered by an 1100cc engine. They were the first racing cars to use a full space frame chassis. Since the engineers had experience with Fiat technology, many of the components were from Fiat, such as the engine and four-speed gearbox. The engine was modified with dry-sump lubrication and twin Weber downdraft carburetors which resulted in an increase of horsepower to 60. Seven of the monopostos made their debut in 1946 at the Coppa Brezzi in Turin's Valentio Park. Competition was fierce but the Cisitalia driven by Dusio was still able to cross the finish line ahead of the pack. Though this was an impressive accomplishment, it was not as entertaining as watching Tazio Nuvolari cross the finish line in hot, and angry pursuit. His steering wheel had come detached and he was forced to drive the car by the steering hub with one hand as the other held a hold of the detached wheel.
The next iteration of vehicles produced by Cisitalia was a road going sports car named the 202. The first vehicle off the production line was a space-framed chassis which was sent to Carrozzeria Colli to receive its body. The second was another coupe which was sent to Alfredo Vignale to receive its body. The third vehicle was given an open roadster body that was clothed by Garelli and further improved by Stabilmenti Farina.
Production of the 202 continued until 1952 with a total of 17 spiders and 153 coupes being constructed.
By Daniel Vaughan | Feb 2007 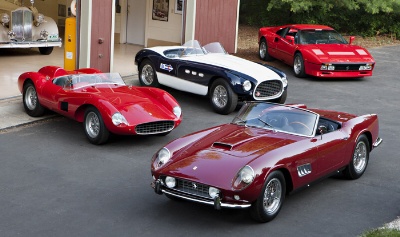