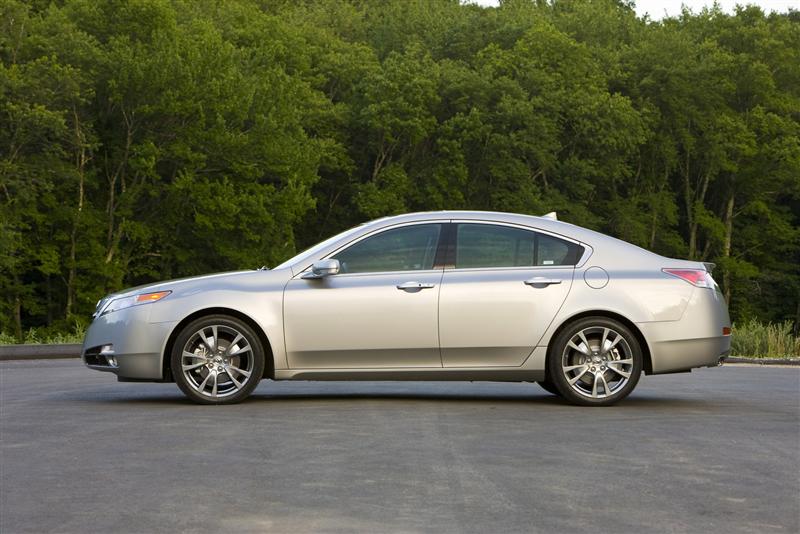 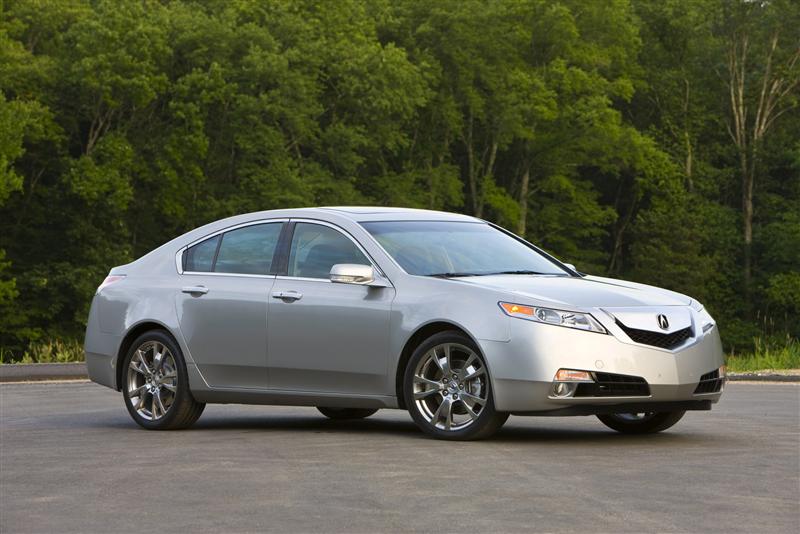 Acura takes performance to the next level and aims straight at the heart of the enthusiast driver with the addition of a manual transmission model to the TL lineup for the 2010 model year. Along with the luxurious TL and sporty TL SH-AWD, the 2010 TL lineup is the most diverse in the vehicle's history, further broadening its appeal among luxury performance sedan buyers. 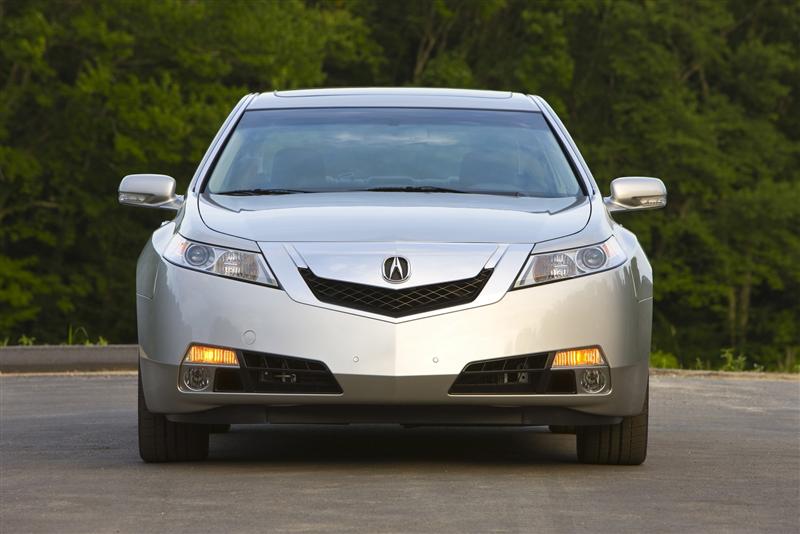 'The new manual transmission equipped TL SH-AWD® allows the enthusiast driver to take full advantage of the performance of Acura's SH-AWD® system,' said Jeff Conrad, vice president of Acura sales, 'Not only is the new 6-speed manual transmission model the best performing Acura TL ever, it is the top handling performer among every vehicle in its class.' 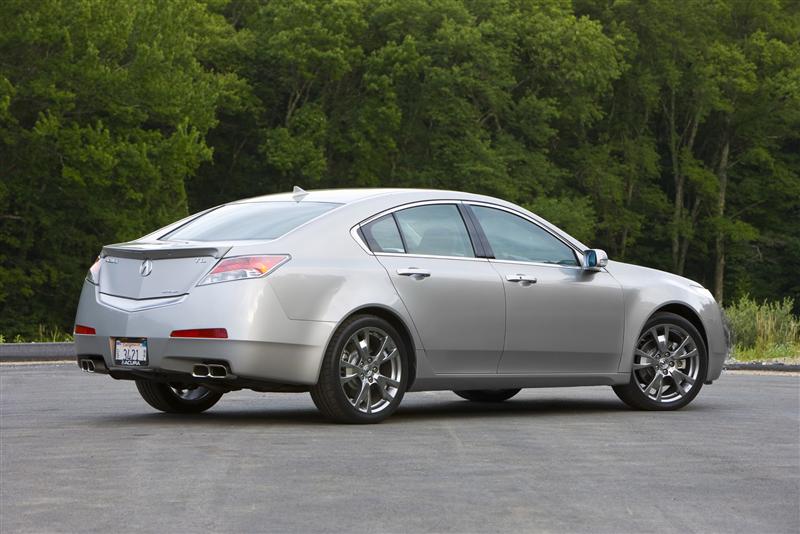 For 2010, two distinct versions of Acura's performance luxury sedan will be offered: a luxurious 280 horsepower, front-wheel drive TL, and a powerful 305 hp TL paired with Acura's exclusive SH-AWD. Each model is available with an available technology package which adds navigation, extensive electronics and an Acura/ELS Surround® 410-watt Premium Audio System.

In addition to the powertrain and technology choices, TL buyers can further customize their performance luxury sedan with tire and wheel upgrades. For 2010, the standard TL is now available with an 18-inch diameter aluminum wheels with all-season tires- giving the TL a more aggressive, sporty appearance. Additionally, the TL SH-AWD (both manual and automatic transmission models) is available with a 19x8-inch 10-spoke aluminum alloy wheel with summer spec high performance tires to further add to the sedans performance capabilities.

With optimized suspension, two performance transmission choices, plus an available Technology Package featuring a comprehensive array of navigation and communication aids, the 2010 TL offers more appeal than ever before. Along with an available Acura/ELS Surround® 410-watt Premium Audio System with 10-speakers, the fourth-generation TL is the most technologically advanced sedan in Acura's history.

The combination of dramatic styling, exhilarating performance and an extensive array of electronics (including AcuraLink Real-Time Traffic with Traffic Rerouting™ and AcuraLink Real-Time Weather™ with radar image maps) ensures Acura's best selling sedan will appeal to a sophisticated, technology-savvy audience. 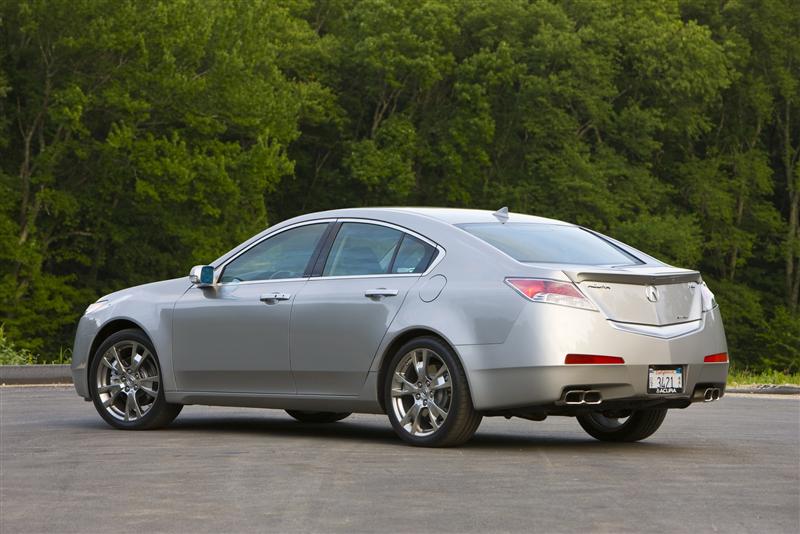 During spirited cornering, SH-AWD® seamlessly distributes more torque to the outside rear wheel to create a 'yaw moment' to help the TL turn in more quickly and precisely – while also continuously apportioning drivetrain torque front to rear and left to right. The result is a remarkably balanced and precise all-wheel-drive performance sedan that excels year-round, not just during inclement weather.

The standard transmission on the 2010 TL and TL SH-AWD® is a Sequential SportShift 5-speed automatic featuring racing-inspired steering-wheel mounted paddle shifters and Grade Logic Control. The big news for 2010 is the availability of a new close-ratio 6-speed manual transmission. (posted on conceptcarz.com)

Engineers also designed an entirely new clutch system for the 6-speed manual transmission to withstand the TL's robust power output while also improving modulation for noticeably easier use. The new self-adjusting, dual-mass clutch delivers extremely consistent effort throughout the entire stroke of the pedal. By keeping the pedal effort linear, the driver has improved feel that results in better clutch interaction.

For 6-speed manual transmission applications, special heavy-duty front driveshafts are used. In addition to being 2-percent larger in diameter, the driveshafts have a larger inboard spline size and team with more heavy-duty CV joints.

The TL SH-AWD® fit with the new 6-speed transmission will also benefit from exclusive Electronic Power Steering (EPS) tuning. Just as with the TL SH-AWD® with Sequential SportShift 5-speed automatic, the EPS delivers low steering effort for parking maneuvers that progressively firms up as speed increases. With the TL SH-AWD® 6MT, the EPS system is further tuned to deliver a slightly heavier feel as speed increases thus generating a more confident mid- to high-speed driving experience.

The structural engineering for the TL's unit-body includes the relocation of the frame rails inside (rather than underneath) the vehicle's floor pan, resulting in a nearly flat body underside. Benefits of this frame design include improved crash safety, a significant reduction in interior noise levels and reduced aerodynamic drag that helps enhance fuel efficiency. Another notable engineering feature is the significant use of high-strength steel, which simultaneously improves the unit-body's overall strength while helping to reduce weight. For additional weight savings, aluminum is used for the hood, the front suspension subframe and rear suspension knuckles.

Wheels and tires are as expressive as the exterior styling. Standard on the 2010 TL are 17-inch aluminum wheels with P245/50R17 all-season for confident year-round performance. Available for the TL are 18-inch alloy wheels with all-season tires.

In keeping with its mission as a driver's car, the 2010 TL interior features a 'dual personal' design that provides both the driver and front passenger with their own personal space. Thanks to its large exterior dimensions, the fourth generation TL has 1.3 inches more rear legroom and 0.5-inch of added rear shoulder room compared to the previous generation TL.

Safety
The 2010 TL makes use of a host of advanced safety features including Acura's acclaimed Advanced Compatibility Engineering™ (ACE™) body structure. In simple terms, the ACE™ body design enhances occupant protection and crash compatibility in frontal crashes. The ACE™ design utilizes a network of connected structural elements to distribute crash energy more evenly throughout the front of the vehicle. This enhanced frontal crash energy management helps to reduce the forces transferred to the passenger compartment and can help to more evenly disperse the forces transferred to other vehicles in a crash. Acura first introduced ACE™ to the Acura line for the 2005 model year and its inclusion in the fourth generation TL means that every vehicle in the Acura model range now has this advanced safety engineering.

Six airbags and active head restraints for the driver and front passenger seats are just a few of the long list of passive safety features built into the TL. The airbag array includes dual-stage, multiple-threshold front airbags, dual-chamber front seat side airbags with front passenger seat Occupant Position Detection System and side-curtain airbags for front and outboard rear seating positions. Additional passive-safety features include 3-point seatbelts for all seating positions, driver and front passenger seatbelt load-limiters with an automatic tensioning system and a Lower Anchors and Tethers for CHildren (LATCH) system that permits quick, secure attachment of up to two child seats in the outboard locations of the rear seating area.

The 2010 Acura TL is designed to meet the latest crash-safety standards, and is targeted to receive the highest crash-safety ratings from the National Highway Traffic Safety Administration (NHTSA***) and Insurance Institute for Highway Safety (IIHS).

For additional information and photos of the 2010 TL (or information on any Acura vehicle), please visit www.acuranews.com.

* Based on 2010 EPA mileage estimates, reflecting new EPA fuel economy methods beginning with 2008 models. Úse for comparison purposes only. Do not compare to models before 2008. Your actual mileage will vary depending on how you drive and maintain your vehicle.

For the first and only time in the history of Insurance Institute for Highway Safety (IIHS) testing, an automobile nameplate has earned the prestigious TOP SAFETY PICK rating for every vehicle in its entire line-up. To accomplish this safety milestone, all 2009 Acura luxury sedans and SÚVs received the highest possible rating in each IIHS crash test and feature the Acura Vehicle Stability Assist™ (VSA®) electronic stability control system as standard equipment.

'TOP SAFETY PICK winners are the top performers in tough front, side, and rear crash tests, and they have electronic stability control, a crucial technology that can help drivers avoid many crashes altogether,' says Institute president Adrian Lund. 'Acura's achievement means that no matter which Acura model buyers choose, they're getting state-of-the-art protection for the most common kinds of real-world crashes.' 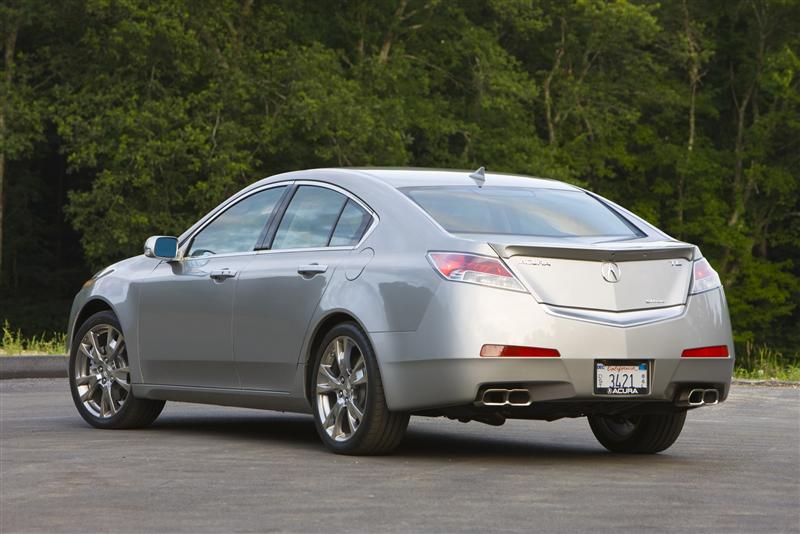 'With every Acura vehicle we build, safety is at the forefront throughout the entire design process,' said John Mendel, executive vice president of automobile operations. 'We are extremely proud that Acura is the first and only nameplate to ever earn this safety distinction.'

The top crash safety ratings are a direct result of Acura's 'Safety Through Innovation' initiative that is based on the brand's commitment to leadership in safety. The initiative's goal is for all Acura models to provide a high level of occupant protection along with injury mitigation to pedestrians, as well as increased crash compatibility with other vehicles, regardless of size or price.

Acura's ACE™ body structure is designed to help absorb the energy of a frontal crash, while also helping to minimize the potential for an 'under-ride' or 'over-ride' phenomenon that can occur during frontal impact with a significantly larger, smaller, higher or lower vehicle. ACE™ channels frontal crash energy to both upper and lower structural elements, including the floor frame rails, side sills and A-pillars. These specially engineered load pathways help distribute frontal impact forces through a greater percentage of the vehicle's total structure and away from the passenger compartment.

Acura engineers have the advantage of being able to utilize two ultra-sophisticated crash test facilities, including the world's first indoor multi-directional car-to-car crash testing facility, located in Tochigi, Japan. This facility has played a crucial role in the development of enhanced designs for occupant and pedestrian safety as well as vehicle-to-vehicle compatibility. 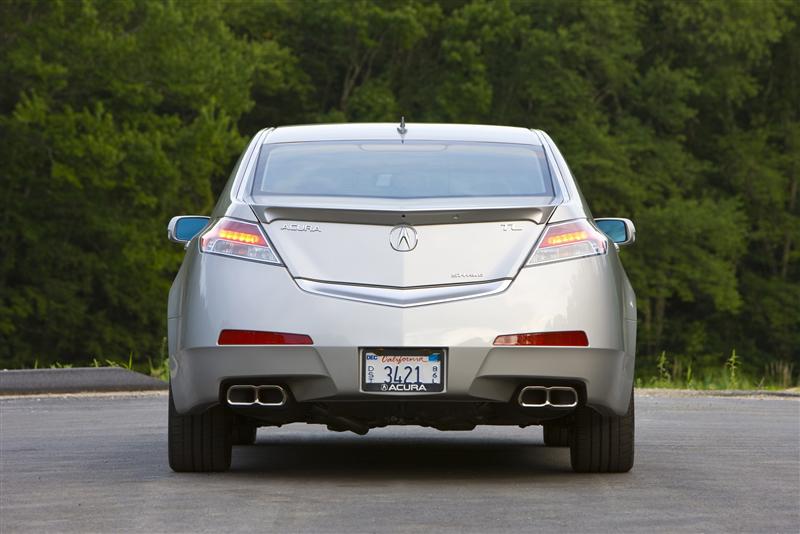 Along with the Japan facility, Acura also conducts extensive safety testing on all Ú.S. developed models at the company's Automotive Safety Research Facility which is located in Raymond, Ohio. The facility features the world's first pitching test sled, which aids efficiency by enabling economical, repeatable and quick crash test simulations with certain interior safety components (such as seats and seatbelts) prior to conducting a crash test with an actual vehicle. It also features one of the world's highest resolution impact barriers, which enables precise measurement of the distribution of impact load forces on a vehicle allowing for even more advanced vehicle designs.

As part of its commitment to improving safety for all road users, Acura has also led the Ú.S. industry in the application of features designed to reduce injuries to pedestrians in a collision- such as collapsible hood hinges and breakaway windshield wiper pivots, with a focus on reducing severe head injuries, which account for 60 percent of pedestrian fatalities. In addition, the company sought to better understand the dynamics of pedestrian collisions, thus it developed the POLAR II safety test dummy which is widely recognized as the world's most advanced pedestrian safety test dummy.

About IIHS
The IIHS is a not-for-profit organization that conducts independent testing to help reduce losses - deaths, injuries, and property damage - from crashes on the nation's highways, and provides its findings to automotive insurers. IIHS has been conducting vehicle testing since 1969, and while it conducts impact crash tests similar to those conducted by NHTSA, IIHS tests make use of offset barriers rather than full-vehicle-width barriers. 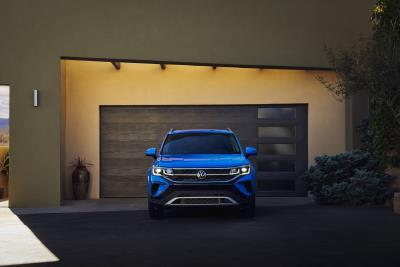 The 2022 Volkswagen Taos: Style, performance and value for the compact SUV space

Based on Volkswagens MQB architecture, and slotting under Tiguan, Taos melds a spacious interior with rugged looks and excellent fuel economy Bold design establishes its connection to the growing Volkswagen SUV family 1.5-liter TSI® engine with...