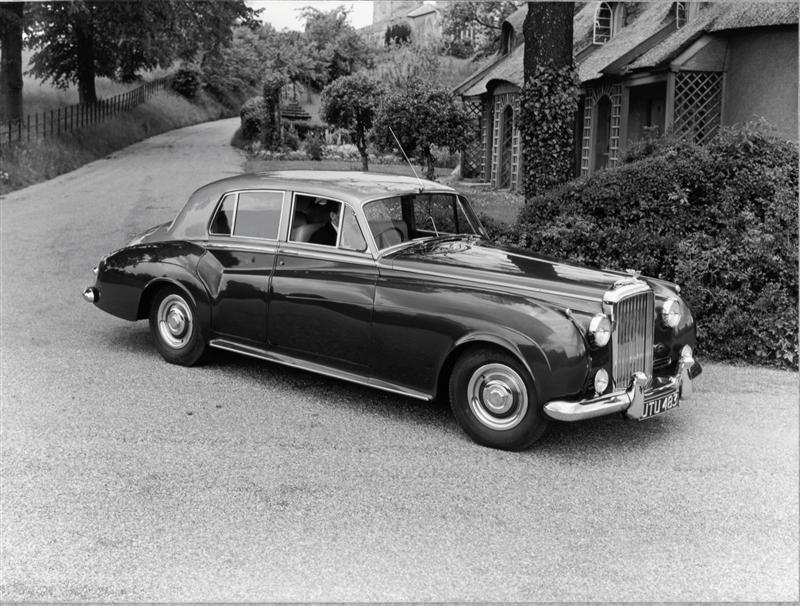 The Bentley S1 was produced from 1955 through 1959 during which 3538 examples were created with 145 being outfitted with custom bodies. 431 examples were Bentley S1 Continentals. Thirty-five of the Bentley S1's sat atop a long wheelbase. Some of the notable coachbuilders who outfitted the S1's were Park Ward and H.J. Mulliner.
The Rolls-Royce Silver Cloud I and the Bentley S1 were nearly identical, except for different badging and radiators. Mechanically, they were identical. Under the hood was an F-head 4887 cc straight six Crewe engine with cast-iron cylinder block and aluminum alloy cylinder heads. A dual SU carburetor type HD6 was used from 1955 through 1957. From 1957 through 1959, a dual SU carburetor type HD8 was used. A four speed automatic gearbox was standard; however, a four-speed manual unit was available as optional equipment. Stopping power was provided by drum brakes. The vehicles were adorned in two-tone paintwork with the hood finished in the lower color.Six months after the introduction of the S1, Bentley introduced the S1 Continental, a name that had also been used as early as 1952 on the R-Type sedan. The Continental versions featured a slightly tuned engine and other performance features. Bentley claimed the Continental as 'the fastest four-seater in the world'. The engines were modified by enlarging the bore which increased the displacement to 4.9 liters. With the standard automatic gearbox and the added weight of optional power steering and power windows, the increase in engine size was well received by Bentley customers. The steel-body was replaced with aluminum, thus reducing the overall weight of the vehicle.
By Daniel Vaughan | Mar 2006
When Bentley was purchased by the Volkswagen conglomerate in 1998, many fans of the marque feared the brand would lose its identity. With long time brother Rolls-Royce getting sold off to a different parent company, though, those worries were unwarranted.Prior to the 1930's, Rolls-Royce and Bentley were serious competitors. Both firms offered their unique interpretations on the English gentleman's car theme. Walter Owen Bentley was a better car builder than businessman, though, and his company was facing serious financial hardships by the early 1930's. Rolls-Royce Ltd. bought the troubled Bentley facilities in 1931. The first Roll-Royce-produced Bentley, the 3½ Litre, debuted for 1933. From this point until Volkswagen's purchase of the works in 1998, Bentley produced near twins of Rolls-Royce cars, with an occasional special vehicle of its own. Bentley and Rolls produced some of the finest four-wheeled machines in the world during their partnership, but the Bentley brand retained little identity of its own. Bentleys were essentially badge-engineered cars. They were the slightly sportier counterparts of contemporary Rollers.
Proof of this can be found throughout the histories of the two companies, but the Bentley S1 is a great place to start. Produced from 1955 through 1959, the S1 was mechanically and visually (in standard coachwork, at least) identical to the Rolls-Royce Silver Cloud I in most ways. We've all seen Silver Clouds patiently waiting outside churches on wedding days, clad in white with dignified grilles gleaming. The Bentley, though, was a stronger seller despite its relative lack of fame.
A total of 3,538 Bentley S1's were produced. Of these, 3,072 were of the standard S1 variety on standard chassis. There were 35 made with long-wheelbase chassis. The remaining 431 were S1 Continentals. The ancient F-series engine, a straight six design, powered the S1 and displaced 4,887cc. It had an iron block with an alloy head. Twin SU carburetors were employed in good British taste, and an automatic transmission was standard fare with an available 4-speed manual offered upon request.The most impressive S1, in terms of both presence and performance, was the Continental. Rolls-Royce and Bentley were not in the habit of announcing such pedestrian numbers as horsepower ratings during S1 production, so it's unknown how much more power the Continental had over the standard S1. Other improvements were obvious, though, and the Continental's intentions were made clear regardless of its hazy power output figures. Braking, steering, and suspension systems were all reworked to give Continentals a more controllable feel. They were not available with standard coachwork. The H.J. Mulliner Fastback Saloon body seen on many S1 Continentals resembles that of the supremely expensive R Continental which preceded it. An imposing and handsome design, a mammoth grille of the traditionally curved Bentley style stood upright at the nose of the vehicle. A long hood bridged the expansive gap between the radiator grille's top and the rakish windshield's bottom, and from there all body lines flowed downward and back in a sweeping motion to create an impression of speed even at standstill. The S1 with standard coachwork was, as stated, a Silver Cloud I twin with a revised grille and new badging. It took the Continental version of the S1 to provide Bentley with a unique car that was in the honest spirit of the maker. If you walk into a Bentley dealer today, you will notice, amongst other cars, a wonderfully styled fastback named Continental. It has a unique design and an engine with astounding grunt. It was designed to go, stop, and handle with aplomb, and bears no resemblance to any modern Rolls-Royce. So the next time you mistake a standard S1 for a Silver Cloud, ask yourself just how much of Bentley's innate identity was lost to Volkswagen.
Sources:
Kinney, Dave. 'Bentley S1 Continental.' Sports Car Market Apr 2005 21 Mar 2009 http://www.sportscarmarket.com/Profiles/2005/April/English/.'Bentley S1 and Bentley S1 Continental; Rolls-Royce Silver Cloud I: Bentley 3 1/2 Litre.' Rolls Royce and Bentley 21 Mar 2009 http://www.rrab.com/.By Evan Acuña