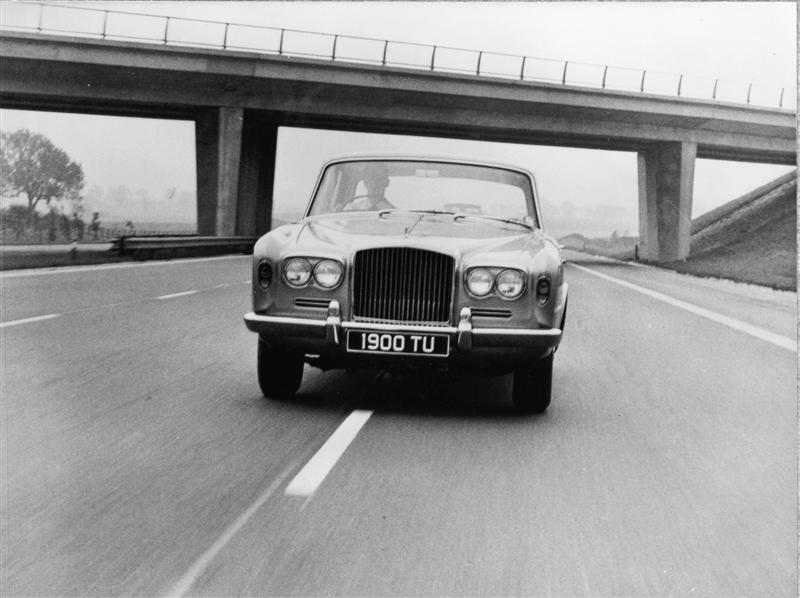 The Bentley T2 was produced from 1977 through 1980 with a total of 568 examples being produced during that time period. They were built as a four-door, five-person saloon with ten being constructed on a long-wheelbase. Under the hood was a 90-degree, 6750 cc, eight-cylinder OHV engine that provided enough power to reach a top speed of nearly 120 mph and race from zero-to-sixty in about 11 seconds. The engine had been used in its predecessor, the Bentley T1. Power was sent to the rear wheels courtesy of a three-speed automatic gearbox. Performance was improved over the prior Bentleys with the adaptation of the rack-and-pinion steering unit. Product sharing continued between Rolls-Royce and Bentley. This was evident on the engine valve covers where the word 'Rolls-Royce' was inscribed. This trend continued in the interior with the instrument panel containing the 'RR' logo. Split-level air-conditioning added to the interior ambiance. To comply with United States safety regulations the T2 had one-piece bumpers in the front and the rear. The front air-dam, head restraints, and dashboard were modified from their European counterparts to comply with the regulations.
By Daniel Vaughan | Dec 2013
Bentley Motors has long been esteemed as the leader in luxury automobiles since 1919. An elegant British symbol, the automotive dealer is the exclusive provider to the Queen through the 2002 released State Limousine. Bentley Motors Limited produced the T-Series from 1965 through 1980. Debuting for the first time on October 5, 1965, the T-Series was launched at the Paris Motor Show as a Bentley-badged version of the completely redesigned chassis-less Rolls-Royce Silver Shadow. The T Series was the first ever Bentley to be introduced with a unitary construction instead of a separate chassis. The T Series was also the first Bentley to use four-wheel disc brakes and also featured independent self-leveling suspension that resulted in exceptional ride comfort.The difference between the Rolls-Royce model and the Bentley was found in the much less complex front grille. The Bentley T is considered more dynamic than the Rolls Royce with is lower hood and radiator shell shape with smoother rounded edges. The T-Series featured a spacious cabin area with plenty of room in the trunk for luggage. The body was constructed of steel and aluminum monocoque body with subframe to mount the engine and suspension. With only 568 models built, the Bentley T2 was introduced in 1977 and ran for a short production span of only three years. The T Series was available as a four-door, five-passenger saloon or as a long wheelbase four-door saloon, with only ten of these longer versions ever being sold. Nearly identical to the Rolls-Royce Silver Shadow II, the only differentiating feature was the front grille and bumper. The word 'Rolls-Royce' was inscribed on the engine valve covers and 'RR' logo found on the interior instrument panel, evidence of production sharing between Rolls-Royce and Bentley.
The upgraded T2 sported innovative split-level air conditioning, rear head restraints, revised dashboard, one-piece rubber-faced bumpers at the front and rear and power-assisted rack and pinion steering. Late in 1979 and 1980 Non U.S. Spec cars received a front air dam along with Bosch CIS Fuel Injection for the U.S. and other markets. Also new and improved was the 90-degree 6.75-liter V8 engine. With a top speed of nearly 120 mph, the T2 could accelerate from 0-60 mph in 11 seconds. Power was sent to the rear wheels via a three-speed automatic gearbox.
Produced in such low volume, this Series is highly collectible automobile today. James May from BBCs Top Gear famously gave away a 1980 Bentley T2 as a prize in a competition in the Daily Telegraph newspaper. Sources:
http://en.wikipedia.org/wiki/Bentley_T-series
http://www.autoevolution.com/cars/bentley-t2-saloon-1977.html
http://www.autoevolution.com/bentley/history/
http://andypo.squidoo.com/bentley-turbo-r-t2-t-series-arnage-classic-car-continental
http://www.boldride.com/ride/1977/bentley-t2
By Jessica Donaldson
Concepts by Bentley