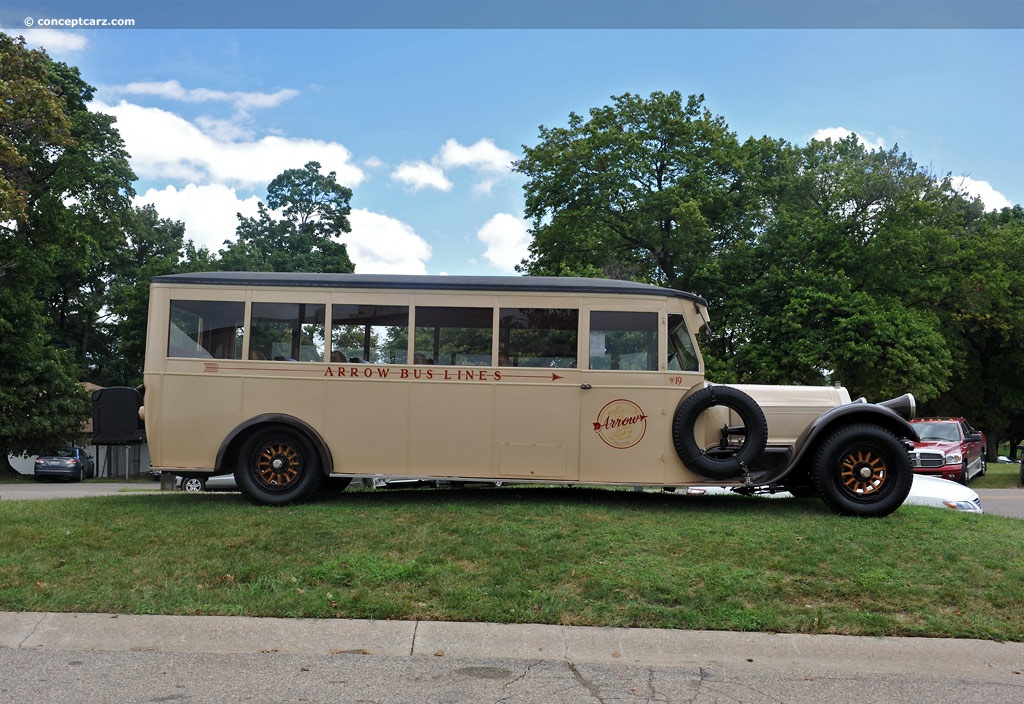 High bid of $76,000 at 2010 RM Auctions - Vintage Motor Cars of Meadow Brook. (did not sell)
Pierce-Arrow is remembered as one of the most successful luxury car builders of early American production. However, their production of trucks and buses is not as well remembered. Between 1909 and 1934, Pierce built a wide range of commercial vehicles, producing during the late teens exceeding that of cars. This vehicle is a 1919 Pierce-Arrow Intercity Coach that is believed to have originally run between Wallace and Burke, Idaho. Ron Fawcette gave the car a complete restoration before appearing in a cavalcade of Pierce-Arrow vehicles at the marque's 2001 centenary celebration in Buffalo, NY. This vehicle features varnished wood spoke artillery wheels, Druss air shock absorbers, fender-mounted headlights, dual side-mount spares, a luggage rack, and a black leatherette roof. There is a raked windshield with quarter windows, a linoleum-covered floor, and aluminum trim. Inside there is woodwork, including the wooden roof slats. Every other side window cranks open for ventilation. The five rows of original-style seats are upholstered in leather, and the radiator shell is nickel-plated. This car has been restored to show-quality condition. It has been fitted with a modern drivetrain and upgraded brakes. The engine is a modern drive train with small-block Ford V8 and automatic transmission. There is a solid front axle and live rear axle with semi-elliptic leaf springs. Hydraulic disc brakes can be found at all four corners.
In 2010, this Pierce was offered for sale at the Vintage Motor Cars of Meadow Brook event presented by RM Auctions. It was estimated to sell for $80,000-$120,000. Bidding reached $76,000 but was not enough to satisfy the car's reserve. It would leave the auction unsold.
By Daniel Vaughan | Aug 2010