Victoria Coupe
Coachwork: Henri Chapron
Chassis #: 33321
A new eight-cylinder engine was used as a replacement for the 6-liter unit found in Delage's top-of-the-line DR and GL models. The new powerplant was designed by Maurice Gaultier and intended to go head-to-head with the 8-cylidner unit found in the elegant Isotta-Fraschini models. Delages powered by this new engine were called the D8 and their designs earned them the accolade of the 'Rolls-Royce of French Cars.' These cars focused on elegance and many of the bodies were designed in-house. For the discerning cliente, a rolling chassis option was available, allowing for custom creations from coachbuilders.This formal Victoria Coupe was built by the French coachbuilder Henri Chapron and is quite unlike his aerodynamic coachworks found on later D8-120s.

Cabriolet
Coachwork: Fernandez & Darrin
Louis Delage launched a new range of luxurious eight-cylinder production cars at the 1929 Paris Auto Salon. Like almost all European luxury cars of the day, the D8 was available with right-hand drive only. Completed in 1932, this Cabriolet is one of the earliest bodies created by Howard Darrin after partnering with his new financier and partner J. Fernandez. The body is fitted on the exclusive D8 SS chassis. Using a special manifold with four carburetors, the engine was lifted to SS specification, raising the output to 145 horsepower.

Cabriolet
Coachwork: Martin & King
Registration #: QA7303
This car was delivered as a chassis only by Melbourne Agents Joubert to its first owner Mr. Watt, who had the original saloon body built by Martin and King of Melbourne. The car was first registered in the state of Victoria in January of 1933. Watt then took the car to the United Kingdom where it was re-registered (QA7303), and from there it toured extensively in Europe. Watt brought the car back to Australia in 1945. Fifteen years later the car was dismantled for a restoration that never began. The dismantled car was purchased by its current owners and it was rebuilt over four years. The body is a faithful aluminum copy of the unique Delage that was originally owned by Andre Surmain of New York for many years.
It is believed that there were 99 examples of the D8S constructed from 1931 through 1933. These were highly sought-after high-performance machines that were stylish and elegant. The D8S was built on a conventional chassis with half-elliptic springs on all four corners. The brakes were cable operated. The true genius of the vehicle lay under the long and graceful bonnet - the eight-cylinder power-plant which was capable of carrying the cars of speeds around 100 mph.The D8S was followed by the D8SS which brought with it further improvements and enhancements. The chassis was dropped by more than three inches which aided greatly in the vehicles handling. They were available on a shorter wheelbase, though only a few chose this option. Those that did got a vehicle that was very sport, lightweight, and nimble. Horsepower on the D8SS rose from 120 to 145.
The D8S and D8SS were constructed during a very difficult point in history. The Great Depression was bringing an end to many marques. Those who did survive had found a way to corner the market, often offering low cost vehicles or offering vehicles with many amenities to attract new buyers. Introducing an eight-cylinder engine at this time was thought to be foolish, yet Louis Delage found a way to make it work. Though, this would be short lived as the company entered liquidation in the mid 1930s and was purchased by its rival, Delahaye.
By Daniel Vaughan | Apr 2007
Louis Delage was born in 1874 and was handicapped by blindness in one eye. This handicap would not hinder him at all in creating some of the most elegant and beautiful creations of the pre-WWII era, and into the early 1950s. He acquired his engineering abilities while working for Peugeot. He worked with the company until 1905, when he left to build cars bearing his own name. Delage had a strong loyalty to France, and he endeavored to build cars that would bring honor to his country. He began racing in 1906 and acquired some success. By 1913, he had constructed a worthy racing machine to claim the Grand Prix de France. His racing machines continued to evolve. In 1914, they featured double overhead camshafts and brakes on all four wheels. Rene Thomas drove a Delage in the 1914 Indianapolis 500 where he emerged victorious. In 1924, he set a land speed record at just over 143 mph.
During World War I, the newly built factory in Courbevoie was used for the production of military items.
During the mid-1920s, the Delage cars were powered by eight-cylinder engine displacing 1.5-liters. In 1927, Robert Benoist drove a Delage with an inline-eight cylinder engine to a victory at the Grand Prix de France, Spanish Grand Prix, British Grand Prix at Brooklands, and the Grand Prix de l'Europe at Monza. After this brilliant accomplishment, Delage announced his retirement from racing.Delage had left the sport on a high-note, but there were troubled times in its future. The Great Depression rattled many industries, including the automotive world. By 1935, Delage had felt the strains of this painful time in history, and was forced to enter liquidation. A Delage dealer named Walter Watney purchased the company's assets. This proved to be a pipe-dream for Watney, and soon was looking for aid from an automotive partner who could help bear the costs of engineering, development and manufacturing. Luckily, he found the assistance he was searching for - at Delahaye. An agreement was reached which allowed the Delage name to continue.The first new product from this union was the D8-120. Mounted in the long, graceful bonnets were an eight-cylinder engine. The engine was basically a Delahye 135MS six with two additional cylinders. Some of Europe's greatest coachbuilders were tasked with creating designs for the chassis. The list includes Saoutchik, Chapron, Pourtout, and Letourner et Marchand. The Delage D8's were very impressive automobiles that had style and glamour in a high-performance package. Though the economy disparity of the time begged Delage to move down market, the company refused, and continued to produce their high-priced machines. The Delage D8-120 had hydraulic brakes, Cotal electromagnet gearbox, and a suspension comprised of transverse leaf springs in the front. The 4.3-liter eight-cylinder engine was capable of producing nearly 100 horsepower in unmodified guise.The Delage D8-100 was a long-wheel base version of the short-wheelbase D8-120. Both the D8-100 and D-120 were built as a conventional rolling chassis and supplied to the coachbuilders for completion. The coachbuilders would often construct the final product to the exact specifications and requirements supplied by the customer. Because of this, many of the vehicles and their specifications vary considerably. Prior to World War II, around 100 examples were created.
Production of the Delage vehicles continued until 1953.
By Daniel Vaughan | May 2010 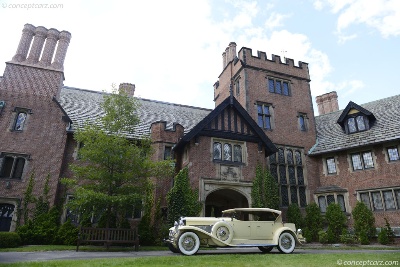 The inaugural Concours dElegance at Stan Hywet Hall %26 Gardens welcomed over 180 rare and exclusive automobiles, motorcycles, and bicycles on the well-manicured 70-acre landscape. The backdrop for this...

BUFFALO, N.Y. – Some of General Motors advanced manufacturing techniques to produce the all-new, Gen 5 Small Block engine family are microscopic, but they have a huge impact on the 75-year-old...
© 1998-2020. All rights reserved. The material may not be published, broadcast, rewritten, or redistributed.