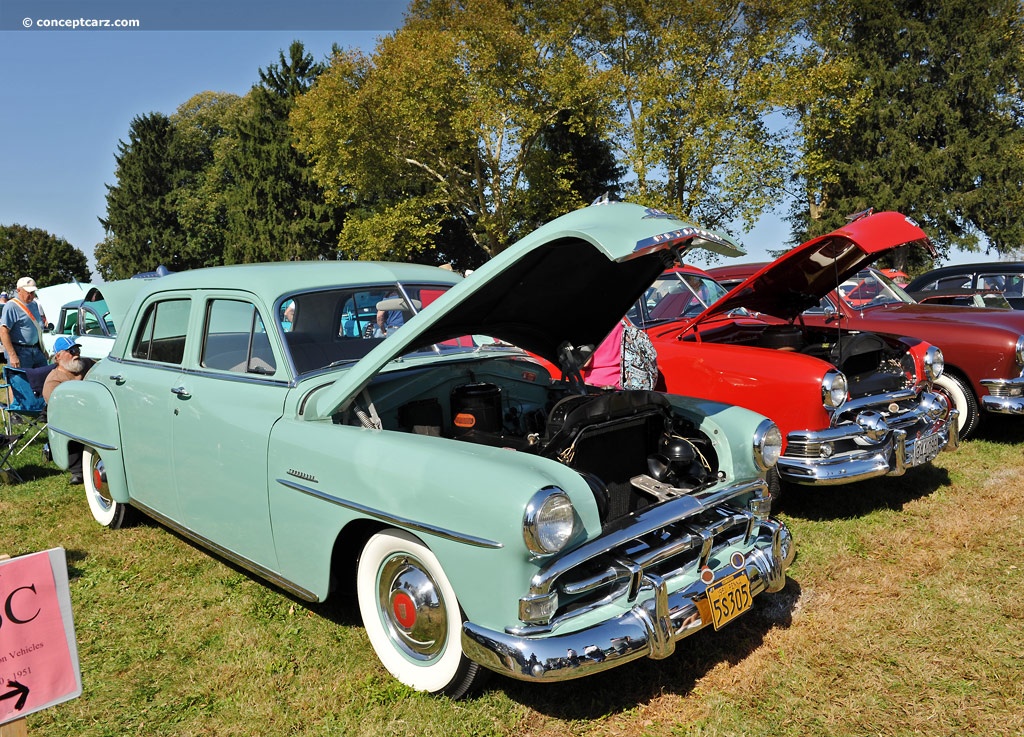 The 1951 Plymouth model lineup included the base level Concord, the new Cambridge, and the top-of-the-line Cranbrook. All were powered by an L-head, inline six-cylinder engine with four main bearings, a Carter one-barrel carburetor, a 217.8 cubic-inch displacement, and delivering nearly 100 horsepower at 3,600 RPM. A three-speed manual transmission was standard, and various rear axle gear ratios available.The Plymouth Cranbrook replaced the former Special Deluxe line and body styles included a sedan, club coupe, hardtop coupe, and convertible. A rolling-chassis was also available and accounted for 4,171 sales. The club coupe had a base price of $1,795 and accounted for 126,735 sales. Next in the price pecking order was the sedan with a factory price of $1,830. This was the most popular body style and accounted for the lion's share of Plymouths 1951 sales, with 388,735 units sold. The 2-door hardtop coupe was priced at $2,115 and found 51,266 willing buyers. This was a new body style, called the Belvedere two-door convertible hardtop, and had a pillarless 'hardtop convertible' appearance. The top-of-the-line convertible listed for $2,220 and 4,171 were sold. The Cranbrook convertible was the only convertible in the Plymouth lineup. Both the Cambridge and the Cranbrook rested on a 118.5-inch wheelbase platform and had a length of just over 193 inches. Both had similar styling, distinguishable by block letters that spelled out model designation at the upper, trailing front fender area.
Production of the Cranbrook continued until 1953, and its name may have been sourced from a city in British Columbia, or from Cranbrook Drive in Detroit that intersected with Cambridge Avenue.
By Daniel Vaughan | Aug 2020

The Plymouth Cranbrook was produced from 1951 through 1953. It served as a replacement for the Special Deluxe and in 1954 it was succeeded by the Plymouth Belvedere. The Cranbrook was similar to the Concord and the Cambridge, but with a higher trim level. It was named after a city in British Columbia or possibly after Cranbrook Drive in Detroit (a street that intersected with Cambridge Avenue).....
Continue Reading >>
Concepts by Plymouth