Roadster
The first line of Auburns developed under the direction of E.L. Cord was the 8-88 Series. It was introduced in 1925 and it helped establish Auburn as a marque of distinction. The introduction of the hood and body molding, a reasonably priced eight-cylinder line, and multi-colored paint schemes distinguished Auburns apart from other automobiles. The average automobile manufacturer had a one-percent sales increase for the 1926 model year; Auburn enjoyed an increase of fifty-two percent. This roadster has a unique third door which allowed easier passenger access to the rumble seat. Power is from a 299 cubic-inch Lycoming eight-cylinder engine that delivers 72 horsepower. The wheelbase measures 129 inches and the car weighs 3180 pounds. The price of the 8-88 roadster in 1926 was $1,695.
By Daniel Vaughan | Nov 2010
In 1928 Auburn introduced two Lycoming-powered eight-cylinder engines, one rated at 88 horsepower and the other at 115 horsepower. These became the bases for the 8-88 Model and the 8-115 Model; their designation obviously in reference to the engine. These new models were given hydraulic drum brakes to aid in stopping power and to help keep the Speedsters in the driver's control. The styling was performed by either Count Alexis de Sakhnoffsky or possibly Al Leamy. Al Leamy was a recent addition to the Auburn staff and would become famous in the years to come, with the design of the L-29 Cord automobile. The Speedster models were very elegant and eye-catching. They featured hood louvers, a raked windshield, twin side-mounted spares, and a boattail rear-end.
The Model 8's were given a wide-ratio three-speed gearbox and rested on either a 125- or 130-inch wheelbase, depending on the model. The 8-115 had the larger size.
1929 brought few changes to the Speedsters; they were now known as the 8-90 and the 8-120. The naming scheme varied slightly from prior years, as horsepower was not rated at 96 and 125 respectively, but the names did not necessarily match. This increase in power was due to a change in the fuel system. 1929 was a great year for the Auburn 8 Models, and enjoyed record sales numbers. The company chose to make minimal changes for the following year, as the cars were selling well and most of their attention was diverted to the upcoming front-wheel drive Cord models. In 1930 horsepower again improved, now rated at 100 for the smaller eight. The name 'Speedster' no longer appeared as part of the Model 8 name. It would re-appear the following year (In 1931), as the company wanted to put emphasis on performance. The larger eight-cylinder engine was dropped, as was both of the six-cylinder engines. The 8-95 Model was bored-out to 268.6 cubic-inches and brought about the 8-98 model (and featured 98 horsepower). It was available in either Standard or Custom guise. The Custom line had an 'A' in the name to help distinguish it from the Standard line (appearing as 8-98A) and featured a free-wheeling, heavy, X-braced frame. Other options included dual-ratio rear axle, wire wheels, upgraded interior in hardware and fabric, and extra moldings. Thanks in part to the onset of the Great Depression, the 8-98 sold for $350 less than the prior 8-95 Sedan of the 1930s. The Sedan sold for $995 while the Speedster for $945. Some experts say that the construction was not as solid as prior years, plus the Lockheed Hydraulics were replaced by Midland 'Steel-draulic' mechanical brakes. Still, Fortune reported the Auburn Model 8's as 'the biggest package in the world for the price.' In 1932, the Styling remained mostly unchaged; mechanically, things were different. A new Startix automatic starter was added; Custom models were fitted with Delco ride regulations which were shock absorbers that were adjustable from the driver's compartment. This allowed a softer or firmer ride depending on the drivers needs at the time. Custom models also were given a vacuum-controlled two-speed axle known as Dual Ratio. This also gave drivers the freedom of selecting a 4.54:1 or 3.00:1 gear ratio. The 4.54 offered better performance while the 3.00:1 had better economy.
The Free-wheeling option, which had previously cost $85, was now standard on both the Custom and Standard models.
With all these mechanical improvements to the vehicle, it was amazing that prices continued to decrease. The Speedster sold for $845, a full $100 from the previous year. In 1933, a Salon version was added to both the 8- and 12-cylinder series.
By Daniel Vaughan | Jun 2008 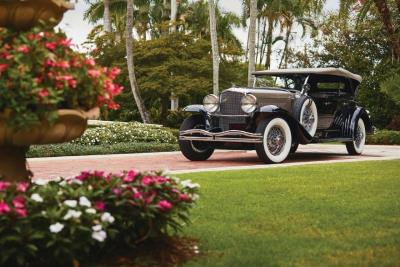