Rally champion, Juha Kankkunen achieves 205.48 mph (330.695 km/h) in extreme Bentley convertible Finland's four-time world rally champion Juha Kankkunen drove a Bentley Continental Supersports convertible on the hazardous frozen waters of the Baltic Sea, off the coast of Finland, at a breathtaking 205.48 mph (330.695 km/h) to set a new world speed record on ice.Kankkunen was in irresistible form with his all-wheel drive, 6-litre, 12-cylinder Continental Supersports convertible which, in line with the Company's CO2 strategy, ran on biofuel. (concept carz) The world's fastest soft top enabled Juha to shatter his own 2007 world ice speed record of 199.83 mph (321.6 km/h) set in the Continental GT at the same location.With the help of his own experienced team and Bentley engineers, Kankkunen overcame the challenges of temperatures as low as minus 30 degrees, sudden snow blizzards and potentially dangerous crosswinds on the 16.5km track on a 70cm-thick layer of sea ice. The record attempt was driven on a 1000m long measured distance with the speed certified by officials from the Finland Traffic Police. His new world record was based on the average of two runs in opposite directions with measured speeds ratified by a representative of The Guinness Book of Records.'The last time, I narrowly missed the magical 200 mph mark in a Continental GT. When I heard about the Supersports I was determined to go record breaking again with the Bentley Boys. This time, with over 600bhp under the bonnet, a Quickshift transmission and the security of the all-wheel drive system, the Supersports convertible was the perfect car to go for the record. ' Kankkunen §äid.'200mph came up after 5km on sheet ice. Then it was just a question of getting everything right in the timing zone and hoping the snow kept away. There's nothing to beat driving a Bentley at these speeds; the conditions may be perilous but the car responds so well to the slightest adjustment which gives you the confidence to push even harder.' As with the previous record-breaking drive in the Continental GT the Anglo-Finnish team used a car with minimum modification. A fully-welded, heavy-duty safety roll-cage, along with Pirelli winter tyres (Pirelli SottoZero II 275/40R20) and a rear bumper-mounted parachute provided reassurance in case of an emergency. Front and rear spoilers provided optimum high speed stability on the treacherous surface.To highlight Bentley's environmental commitment to sustainable fuel sources, Kankkunen's Supersports Convertible was fuelled with E85 bioethanol rather than petrol (gasoline). All models in the Continental range are capable of running on petrol (gasoline), E85 bioethanol or any combination of the two.Wolfgang Dürheimer, Bentley's new Chairman and Chief Executive, said: 'The ice speed record is an amazing feat by Juha Kankkunen, whose skill and courage in extreme conditions truly make him one of the modern-day Bentley Boys. We will be celebrating this achievement with a very special ‘extreme' Bentley, which will be the most powerful model ever to bear the famed Winged B emblem.'A limited edition of just 100 examples of this most extreme Bentley will be made and the car will make its global debut at the Geneva Motor Show on 1st March.Bentley Motors' and Juha Kankkunen's new world ice speed driving records were supported by the following sponsors and technical partners:BREITLING – ‘Instruments for Professionals' and brand partner of Bentley Motors for the provision of specialist timing equipment.JEFF GREEN – specialised warm weather clothing for all technicians and engineers.PERFORMANCE AND PROTECTION - manufacturer of advanced roll cages for health and safety and motorsport applications since 1989.IOGEN CORPORATION – E85 Bioethanol supplier.JÚHA KANKKÚNEN: BRIEF CV

Celebration of Bentley's world ice speed record- breaking Supersports convertible driven by rally champion, Juha KankkunenBentley announces today its most potent and radically styled convertible ever – the 202mph (325km/h) Supersports ‘Ice Speed Record' convertible. This new model, limited to just 100 cars worldwide, is a celebration of the Company's world ice speed record set two weeks ago byFinland's four-time world rally champion Juha Kankkunen in a Bentley Continental Supersports convertible.Driving the all-wheel drive, biofuel-powered 6-litre, 12-cylinder Continental Supersports convertible on the perilous frozen Baltic Sea, off the coast of Finland, Kankkunen achieved a speed of 205.48 mph (330.695 km/h) eclipsing his own ice speed record of 199.83 mph (321.6 km/h) set in 2007 in the Continental GT.Both the new Supersports ‘Ice Speed Record' convertible and Juha's record-breaking Supersports will be on display on the Bentley stand at the Geneva Show from 1st March.Wolfgang Duerheimer, Bentley's new Chairman and Chief Executive, said:'Juha Kankkunen's drive was a remarkable achievement and worthy of a very special car. The Continental Supersports ‘Ice Speed Record' is a true driver's car that captures that unique Bentley spirit. It offers extreme performance, agility and an extrovert personality, while retaining the refinement, handcrafted luxury and comfort our customers expect.'Bentley's most powerful 6 litre W12 engine with FlexFuel technologyThe 6-litre, twin turbo-charged W12 engine, produces 640 PS (631 bhp / 471 kW) - the most powerful Bentley ever - and 800Nm (590lb ft) of torque. Paired with a Quickshift six-speed automatic transmission, it launches the convertible ‘Ice Speed Record' model from 0-60mph in 3.8 seconds (0-100km/h in 4.0s) and reaches 100mph from a standing start in only 9.5 seconds (0-160 km/h in 9.4s).The additional engine power of the new convertible is the result of fine tuning of the engine to optimise the benefits of the new free-breathing air intake ducts, intercooler system and the exhaust system. And true to the Bentley tradition of delivering instantly available and exhilarating performance in real world driving conditions, the ‘Ice Speed Record' convertible will sprint from 50-75mph (80-120 km/h) in just 2.5 seconds.In common with its Continental stable mates, the new Supersports model runs on both petrol (gasoline) or E85 bio-ethanol or any combination of the two. Pioneered in the Supersports coupe, this FlexFuel technology offers a reduction of up to 70 per cent in CO2 emissions on a well-to-wheel basis, a measure of a fuel's net contribution to the atmosphere, not just tailpipe emissions. The on-board fuel supply system monitors the content of the fuel tank and ensures that power and torque remain constant regardless of the ratio of petrol to biofuel. (concept carz) The all-wheel drive system provides outstanding traction in all weather conditions. The drive is transferred between the front and rear axles automatically via a Torsen centre differential. The standard 40 front/60 rear torque split provides optimum traction and modulation of line and attitude by 'throttle steering' for more enthusiastic drivers.The new exhaust system with reduced back pressure benefits gas flow while delivering a sporty baritone note under hard acceleration. On light throttle cruising, the new Supersports model remains impressively refined.Large diameter (420 mm front, 356 mm rear), carbon ceramic brake discs, with eight-piston calipers at the front provide fade-resistant stopping power. This lightweight system also reduces unsprung and rotating mass, benefiting steering response and handling. As with all Supersports models the ‘Ice Speed Record' is fitted as standard with Pirelli 275/35ZR20 ultra high performance tyres.Dramatically extrovert styling

Just 100 examples of this dramatically styled new model will be built at Bentley's Crewe factory. The Supersports ‘Ice Speed Record' is distinguished by its vibrant and muscular styling cues that reinforce the uncompromising performance credentials of this extreme Bentley convertible.
Bentley's designers have selected three ‘stand-out' exterior paint colours for the new convertible: Beluga, Quartzite and, fittingly, Arctica White. These colours are complemented by a Dark Grey Metallic soft top with Bentley's refined three-ply composite construction.The unique appearance of the soft top is created in the outer layer by a 'grey' acrylic fibre with a semi-transparent 'metallic look' in a twill weave construction. The car's potent performance is further accentuated by 20' inch, 10-spoke Supersports wheels with a dark tint finish.Contemporary luxury craftsmanship and advanced technology

The dramatic character of the four-seat Supersports ‘Ice Speed Record' continues in the cockpit in which traditional Bentley craftsmanship and fine detailing are given an even more extrovert interpretation.Traditional leather hides sit alongside a range of contemporary materials for a distinctly sporting style. This includes diamond-quilted Alcantara to doors, quarter panels and seat facings, and ‘soft-grip' leather on the steering wheel and gear lever.Únique to the ‘Ice Speed Record' model, the high-gloss carbon fibre on the dashboard, centre console and roof panel, features a unique red weave. The theme continues with Pillar Box red piping to seats and doors, and Pillar Box Red contrast stitching to seats, door casings, steering wheel and gearshift paddles.The front seats and floor mats also feature embroidered ‘Supersports' legends while the signature Breitling dashboard clock also has a red accent.The Supersports ‘Ice Speed Record', despite its ice racing pedigree, is clearly no ‘stripped out' racer. Its highly specified interior has the highly-advanced touchscreen infotainment system from the new Continental GT that provides rich map imagery and a 30GB on-board hard drive.An 8-inch screen displays the car's audio system, telephone, ride and comfort settings as well as the very latest navigation system, which uses both an in-car hard-disc drive and a DVD player to access route data. It also utilises dynamic navigation to avoid heavy traffic spots, locates destinations using geo-tagged photos from an SD memory card and is Google Maps-compatible for most markets.The infotainment system, with 7-digit postcode entry, combines touchscreen controls and classic Bentley knurled rotary switches to offer instant usability. It is complemented by a new driver information panel (DIP) located in the main instrument cluster. The new wide-screen DIP employs TFT technology and enhanced graphics provide the driver with clear and easily accessible information about a wide range of car systems.Source - Bentley 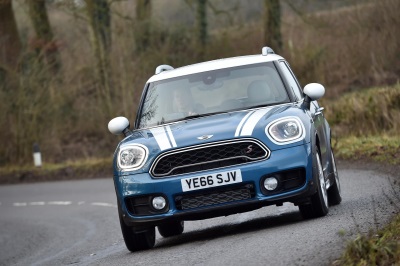 All-new Countryman enters the C-segment with increased dimensions, powerful proportions and rugged styling Five full sized seats, with a clear increase in space and versatility and a premium cabin a...