The Scuderia Toro Rosso STR1 was designed by Mark Smith (of red Bull Racing RB1 fame) and Gabriele Tredozi. It was driven by Vitantonio Liuzzi - who had driven for their sister team, Red Bull Racing, for four Grand Prix's during the 2005 season. The other driver was Scott Speed.For 2006, Red Bull Racing purchased the Minardi team which had competed in Formula One for twenty years. They renamed it using the Italian translation of their brand-name. The new team inherited Minardi's factory at Faenza and their technical team. The ex-owner Paul Stoddart kept Minardi's other property in Ledbury. Powering the STR1 was a Cosworth TJ2005-2 V10 engine mated to a Red Bull seven-speed gearbox. The team would finish the season in 9th place in the World Constructors' Championship after having earned one point.
By Daniel Vaughan | Apr 2011 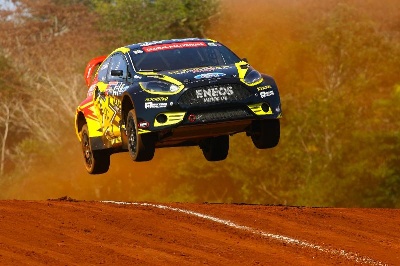 FOZ DO IGUAÇU, Brazil (April 23, 2013) - Rockstar Energy Drink driver Tanner Foust had a target on his back this weekend in Brazil, where the opening round of the Global Rallycross Championship...

In 1983, a little-known Belgian driver by the name of Thierry Boutsen would buy his way into a drive with the Arrows Racing Team in time to take part in the Belgian Grand Prix. Though he would retire...
2006 Formula One Season2006 Season Review