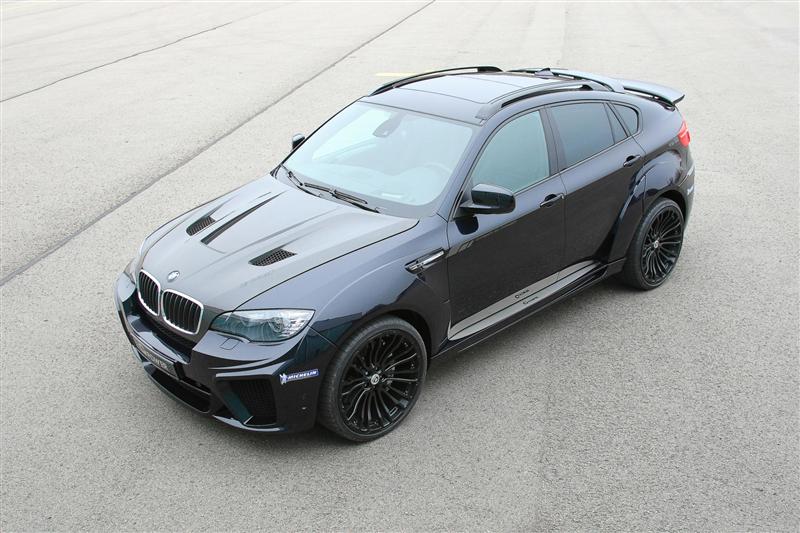 First there was the 'small' TYPHOON body kit; now here comes the 'big' TYPHOON wide body kit for the BMW X6 M. Thanks to optimised air flow and up to 15 % more cooling, the G-POWER body kit clears the way for an increase in the base output of the 4.4 l V8 bi-turbo power unit of 170 hp to no less than 725 hp. 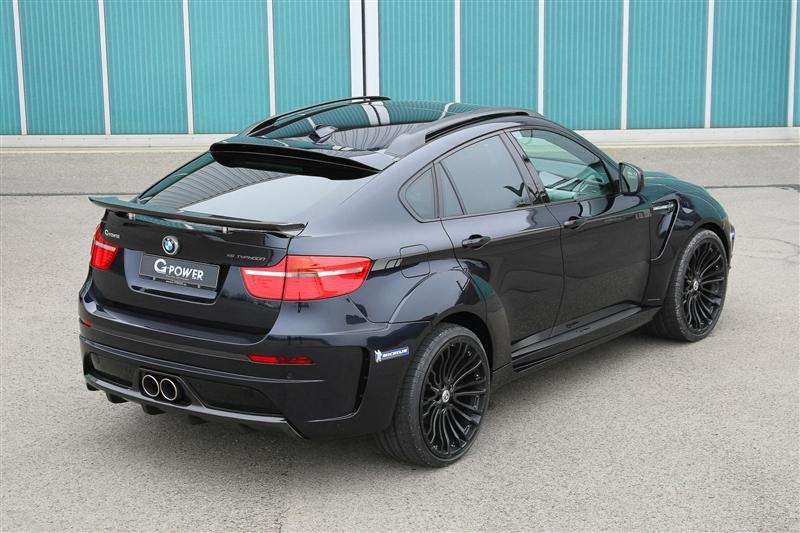 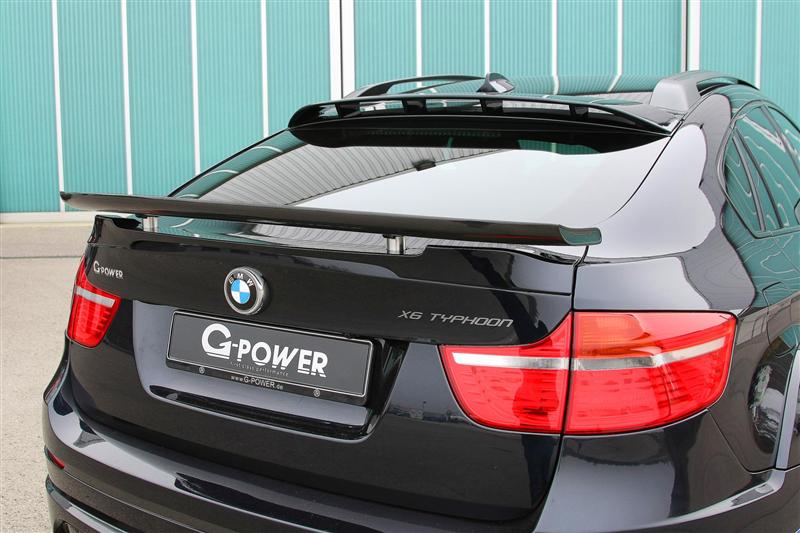 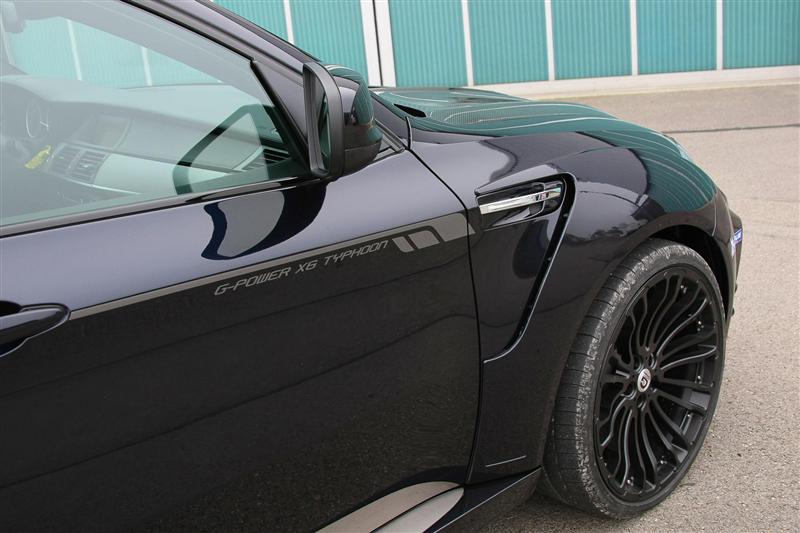 The G-POWER X6 M TYPHOON wide body kit is produced in OEM quality and features muscular flared wheel arches plus distinctive skirts and spoilers on the front and rear trimmed for maximum aerodynamic efficiency. The body kit is made from PÚ RIM and has been developed by G-POWER designers using state-of-the-art CAD technology. Thus the base vehicle was fully digitised in-house with a 3D scanner.

The elegant sweep of the flared G-POWER wheel arches front and rear – which, of course, come with perfectly matched inner panels – give the X6 M seven centimetres more width, making room for extra-wide 23-inch wheels and tyres. The top-end version comes with G-POWER SILVERSTONE EDITION forged wheels developed specifically for the TYPHOON, with 11Jx23 format up front and 12Jx23 on the rear. Each corner sports 315/25 ZR 23 high-performance rubber from development partner Michelin, delivering optimum traction and sporty handling that is further refined by the G-POWER coilover suspension and a 30 mm lower ride height. The separate and independently adjustable rebound- and compression damping allows for an individual suspension setup that matches with the TYPHOON'S wheel / tyre combination and the output enhancement.

Together with the flared wheel arches, the face of the exclusive SÚV is distinguished largely by the G-POWER TYPHOON front skirt designed entirely in-house. The large air intakes not only improve overtaking prestige, they also guarantee optimum cooling of the engine and front brakes. Moreover, design refinements succeeded in reducing aerodynamic lift on the front axle.

The carbon fiber G-POWER VENTÚRI hood also contributes to the distinctive look of the G-POWER X6 M TYPHOON. The starting point for the development of the G-POWER VENTÚRI hood was the technical necessity to remove heat from the engine compartment of the uprated engines as quickly as possible. Otherwise a loss of performance can happen, since the ECÚ (electronic control unite) makes use of diagrams with reduced degrees of ignition when a fixed temperature limit is reached, in order to safeguard the engine.

The 'DYNAMIC VENTING' Technology of the G-POWER VENTÚRI hood vents the engine compartment dynamically, allowing the otherwise untapped performance potential to be achieved with no additional thermal stress. Performance enhancement can not be supported more efficiently.

Further on the sills on the TYPHOON serve not only as aerodynamically efficient transitions between the front and rear flares, they also house five LED units on each side that illuminate the ground on each side of the vehicle when activated either by remote control or by pulling the door handle.

Like the front section, the rear skirt on the TYPHOON is conceived to completely replace the production-standard bumper. The diffuser has an imposing impact on the rear view, as do the two distinctive 114 mm tailpipes on the G-POWER stainless steel sports silencer. Together with the two spoilers fixed to the rear hatch, a roof spoiler and a multi piece rear spoiler with Carbon wing, minimal lift has been achieved at the rear axle, too. A further example of the detailed refinements in the design of the G-POWER TYPHOON Wide Version for the BMW X6 M is the four-part underbody panelling. 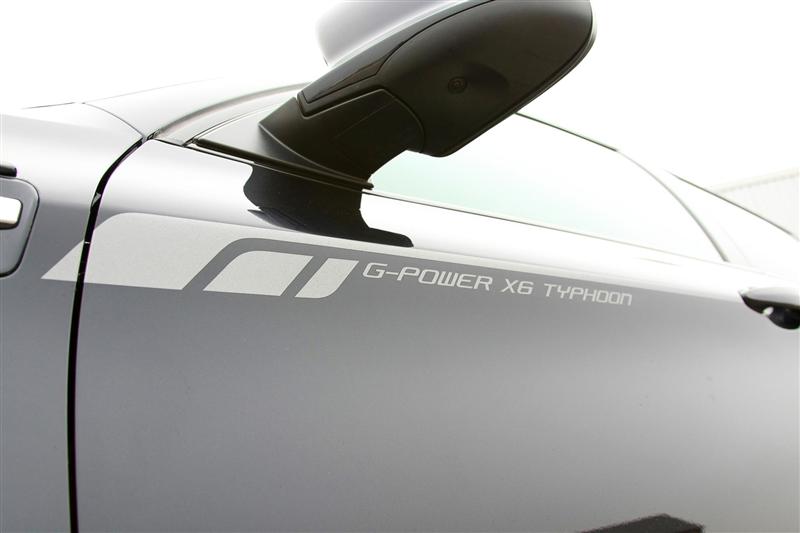 In keeping with the dynamic look, G-POWER offers a mighty power unit for the BMW X6 M. Thanks to the enlarged air intakes in the front skirt and the outlet vents in the bonnet, there is an improved flow of cooling air to the radiator and oil cooler at the front of the vehicle, increasing cooling performance by around 15%. This establishes the basis for a thermally balanced performance increase achieved by electronic optimisation developed by G-POWER and involving changes to the engine mapping including removal of the top speed limiter. On the exhaust side, a fully stainless steel G-POWER system delivers the necessary reduction in exhaust back pressure featuring a set of sport catalytic converters and most important a set of flow optimized G-POWER exhaust manifolds connecting the turbochargers. In addition, optimised connection pipes have also been installed between the turbochargers and the cylinder heads to minimise pressure and thermodynamic losses. The outcome is an additional 170 hp, taking the overall output to an impressive 725 hp at 6,000 r/min and 890 Nm of torque at 1,500 r/min. The maximum torque is electronically limited. In combination with a reinforcement of the standard BMW X6 M automatic transmission a torque maximum of 1000 Nm can be provided. (concept carz)

The enormous potential of the G-POWER modified BMW V8 bi-turbo power unit endows the X5 M with on-the-road performance that catapults it into the elite group at the very top of this vehicle class. The sprint from 0 to 100 km/h lasts only 4.2 seconds, with the top speed at over 300 km/h. Braking is done with the G-POWER ceramic brakes on the front and rear axle, which provide low-weight and reliable high-performance braking. „Fade' is therefore a foreign word for the 6-piston brake calipers in front which bite on 396 mm rotors and the 4-piston calipers at the rear axle which clamp on 380 mm rotors.

G-POWER has refined the interior of the BMW X5 M with exclusive accessories like an ergonomically designed sports steering wheel and a G-POWER speedometer. Further preferences can be fulfilled with exclusive interiors in all shades of leather and Alcantara.

Woodcliff Lake, NJ – June 24th, 2013 … It isnt often that an automobile manufacturer gets to launch an entirely new vehicle segment, but thats exactly what BMW did in 1999 when it introduced the worlds first Sports Activity Vehicle – the BMW X5. Two...
© 1998-2022. All rights reserved. The material may not be published, broadcast, rewritten, or redistributed.