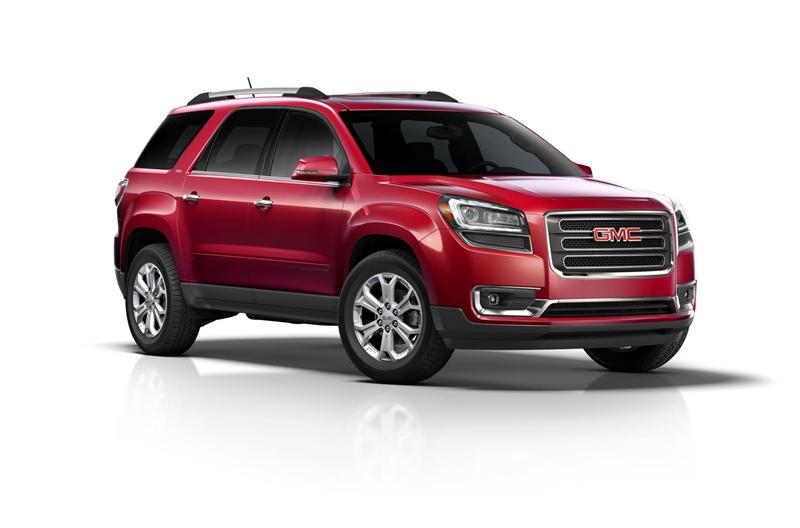 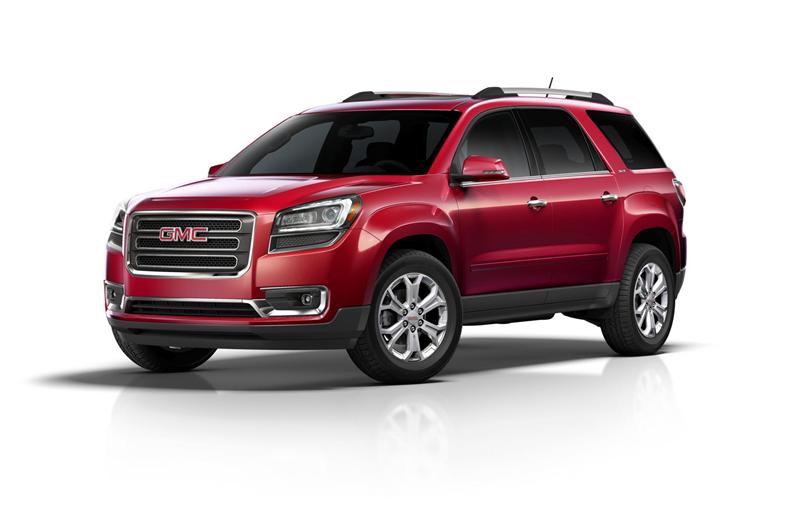 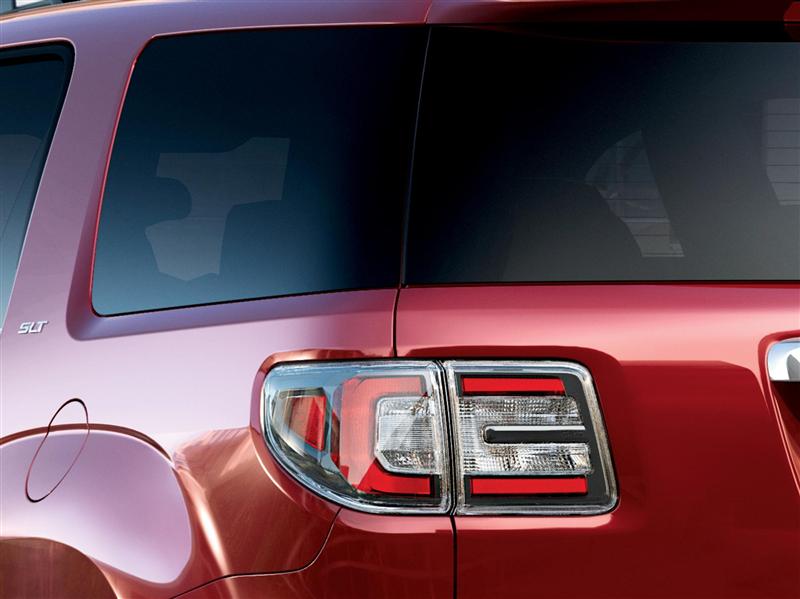 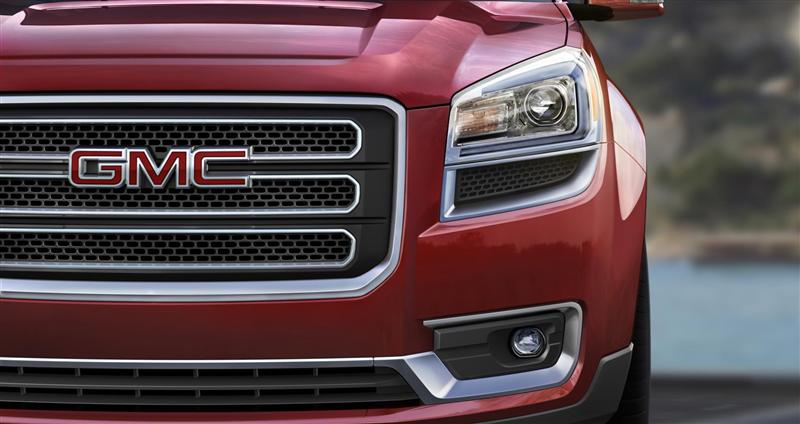 Acadia, which launched in 2007 as GMC's first crossover and defined a segment that has since surged in popularity, had the best sales in its five-year history in 2011. The Denali model, added in mid-2010, broadened Acadia's appeal to luxury customers with its combination of functionality and style.

Acadia retains the interior functionality popular with families, including the SmartSlide seating system, which allows easy access to the third row for both seven- and eight-passenger seating configurations. Likewise, both the second and third row still fold flat for class-leading maximum cargo space, including the ability to carry 48-inch-wide sheet goods, such as drywall and plywood.

First impressions are everything, and the 2013 Acadia was developed to make a strong one. A chiseled, three-bar grille sits prominently in the new, more upright design.

Diffused LED running lamps lend a premium look to the Acadia and are standard on all models, regardless of whether standard projector beam or optional HID headlamps are selected. New taillamp detailing reflects the advancements up front.

The new Acadia gets other subtle exterior design updates, including wrap-around rear glass and a new rear spoiler. New 18-, 19- and 20-inch wheel patterns complement the vehicle's lines and stance.

The Acadia's refined interior uses upgraded soft-touch materials, with French stitching that adds a tailored look and red ambient light flowing across the dashboard. SLT and Denali models get aluminum accents on the center console, doors and dash.

The redesigned Acadia will be the first vehicle on the market with GMC's new front center air bag system, created to protect drivers and front passengers in far-side impact crashes where the affected occupant is on the opposite, non-struck side of the vehicle. It deploys from the inboard side of the driver's seat and positions itself between the driver and front passenger.

'While no restraint technology can address all body regions or all potential injuries, the front center air bag is designed to work with the vehicle's other air bags and safety belts to collectively deliver an even more comprehensive occupant restraint system,' said Gay Kent, GM executive director of Vehicle Safety and Crashworthiness.

Standard on the Acadia Denali and available on other models are Side Blind Zone Alert and Rear Cross Traffic Alert systems. These systems use radar to watch spots the driver may not be able to see – and provide visible and audible warnings to help prevent collisions.

The 2013 Acadia's redesigned infotainment functions feature capacitive touch controls that use electrodes to sense the conductive properties of objects such as the touch of a finger.

Other audio system features include HD radio capability, a photo viewer and a standard rear-vision camera with dynamic guide lines that will display on the high-definition screen.

Acadia's most-popular options, including rear-seat entertainment, a Dual SkyScape sunroof and a trailering package, continue to be available. 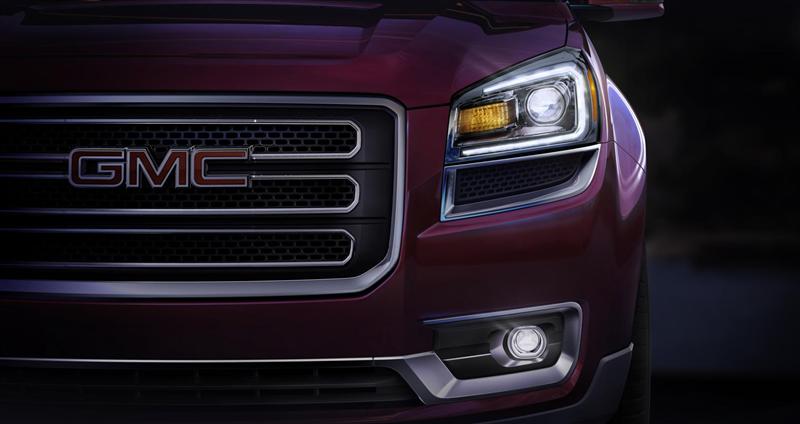 
'When designing the new Acadia, we considered the contemporary shapes and materials GMC buyers expect from many products they buy,' said Dave Lyon, executive director of design. 'The Denali's attention to detail is the ultimate demonstration of this approach.'

The 2013 GMC Acadia and Acadia Denali will be built at the Lansing Delta Township Assembly Plant in Lansing, Mich. Pricing, availability and more details will be announced closer to the vehicle's on-sale date in late 2012.

GMC has manufactured trucks since 1902, and is one of the industry's healthiest brands. Innovation and engineering excellence is built into all GMC vehicles and the brand is evolving to offer more fuel-efficient trucks and crossovers, including the Terrain smaller SÚV and Acadia crossover. GMC is the only manufacturer to offer three full-size hybrid trucks with the Yukon, Yukon Denali SÚVs and the Sierra pickup. The new Sierra Heavy Duty pickups are the most capable and powerful trucks in the market. Details on all GMC models are available at www.gmc.com, on Twitter at @thisisgmc or at http://www.facebook.com/gmc.Source - GMC 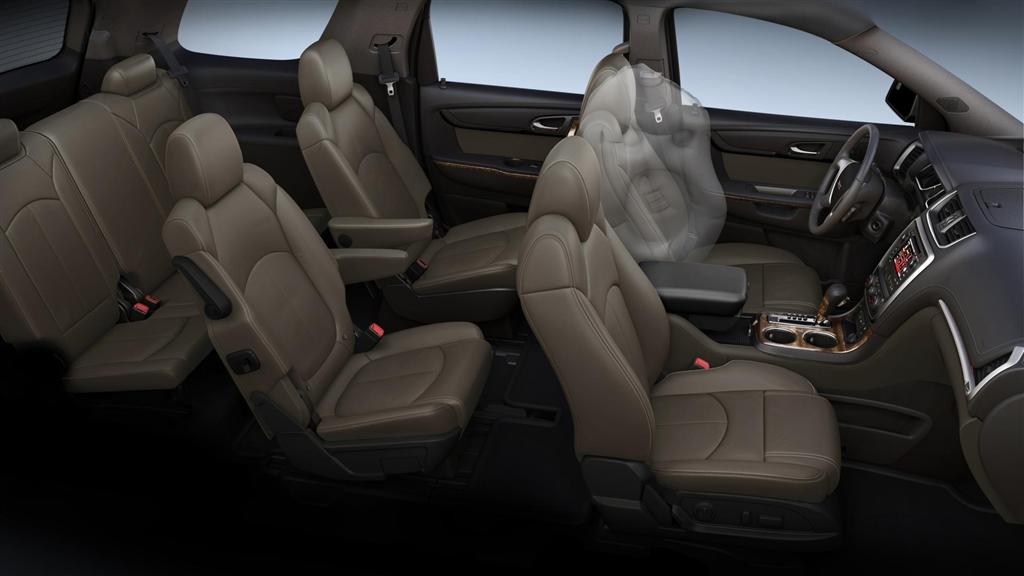 The 2013 GMC Acadia three-row crossover SÚV launches this fall with a suggested retail price of $34,875, including a destination charge of $825. The upscale Denali trim – originally added to Acadia for the 2011 model year – will return with a long list of standard equipment for $46,770, including destination.

'The 2013 Acadia arrives with great momentum,' said Tony DiSalle, vice president of GMC Marketing. 'Our design and engineering updates add even more value to an award-winning vehicle that just saw its best August ever, with retail sales up 35 percent.'

Acadia is a segment leader in retained value, defined as the projected residual value of a vehicle after five years of ownership. Both Edmunds.com and ALG have named the 2012 Acadia to their respective lists of the industry's residual value leaders.Source - GMC 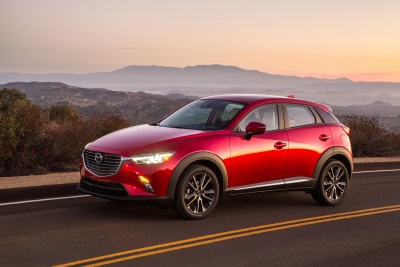