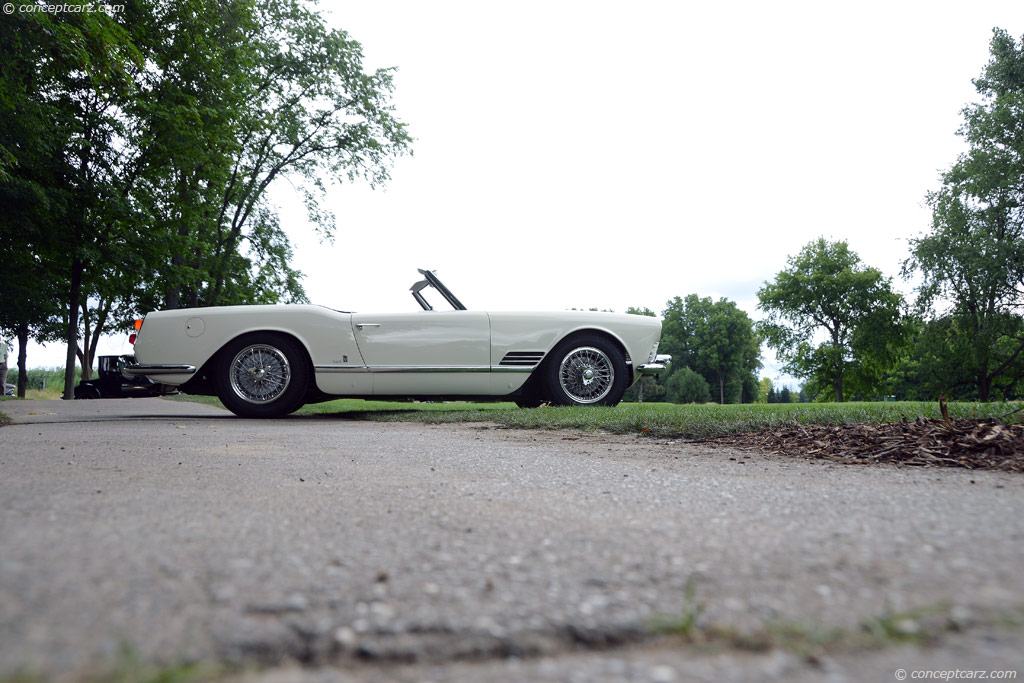 The Maserati 3500 GT was produced from 1957 through 1964 with over 2000 examples built. The vehicle was penned by Carrozzeria Touring gathering many styling cues from the Maserati A6G54 coupe. The 3500 GT is seen as a savior for the Maserati Company. Prior to its production, the company produced less than 140 cars in a ten-year time span. Racing and competition nearly exhausted the funds; the company needed help. Becoming a mass-produced company and the widely accepted 3500 GT saved the company and allowed for Maserati to continue its racing efforts with the design and development of the famous birdcage design.

In March of 1957, the 3500 GT was shown to the public at the Geneva Motor Show. Two prototypes were shown; one was designed by Touring and the other by Allemano. The Touring design was a 2+2 coupe, which was later selected by Omer Orsi selected for production. There were minor modifications to the production design. The headlamps, radiator grille, and dashboard were slightly modified but remained mostly unchanged.

Under the hood was a 3.5 liter DOHC inline-six-cylinder power-plant equipped with three side-draft two-barrel carburetors achieving 240 horsepower. The engine was an evolution of the Tipo 250F Formula 1 car. The top speed of the 3500 GT was achieved at 145 mph.

In 1960 Carrozziera Vignale introduced a 3500 spider that sat atop a shortened chassis. Other coachbuilders such as Allemano, Frua, Moretti, Bertone, and Boneschi produced bodies for the 3500 chassis.

The car was impressive both visually and mechanically. It was Maserati's first production car built in great numbers. During its eight-year production lifespan, over 2225 examples of the Coupes and Spyders were produced.
By Daniel Vaughan | May 2009

The Maserati brothers' involvement with fast cars dates to 1914 and includes building many early Grand Prix cars. In 1926 they founded the Maserati marque and won the Targa Florio that year. Then, in 1937, the brothers sold the Maserati Works to the ....[continue reading]