Light Touring
Coachwork: United Motor Corp.
This 1904 Cameron is an Experimental Light Touring car with coachwork by the United Motor Corp. of Pawtucket, RI. Power is from an air-cooled 3-cylinder engine displacing 116.1 cubic-inches and offering around 12 horsepower. When new, it sold for $800. For its era, the car was a nimble performer and rode on a narrow tread, and had a low weight of about 800 lbs. The Cameron was guaranteed for one year from date of purchase against all defects in material or workmanship.The 1904 Cameron came in three styles in 1904. The first was a two seated Runabout priced at $650. The second, with a detachable tonneau (which made it into a four seater), sold for $750 and the last with a 'canopy' (surrey style with side curtain) sold for an extra $50. Some of the unique and unusual features of a car this old are: left hand drive, shift lever on the steering column, narrow treat wheels of either 45 or 54 inches, riding on a 76 inch wheelbase and weighing only 700 pounds. The car was claimed to be the 'greatest hill climber on earth' - speeds from three to twenty five miles per hour. Although cars could be ordered in any color desired, the standard finish was automobile red, beautifully stripped with gold or indigo black trimmed in gold with tufted or plain upholstery to match.
The car was manufactured by the James Brown Textile Machinery Co. of Pawtucket, RI and was sold by United Motors Corp. The designer was Everett S. Cameron and his younger brother Forrest, both of Brockton, MA, where they had been designing bicycles as teenage boys.
The warranty promise - 'We guarantee the Cameron car absolutely for one year from date of purchase against all defects in material or workmanship.'
By Daniel Vaughan | Mar 2014
The Cameron Company began with a bicycle repair business followed by producing a steam car in 1899. Within a few short years, and having secured adequate financial backing, were able to move into a very large plant where they produced internal combustion, air-cooled cars. During their career, they would produce trucks, tractors, marine, and aviation engines as well as cars and boats. They had several innovate creations that would become industry standards, such as left-side steering wheels, front-mounted engines, and air cooling. With a lack of patent applications in the early days of production (as was the case with many manufacturers), it is unclear 'who was first.'The Cameron Automobile Company, founded by Everett S. Cameron, produced vehicles from 1903 through 1914 (followed by on-again, off-again production from 1916 through 1920). They are remembered for their air-cooled vehicles and for relocating often. In the early 1900s, the company began by producing steamers in Massachusetts. Fearing that the steam powered cars would not have the longevity as gasoline powered vehicles, they quickly to single-cylinder gasoline vehicles. A few years later they entered an agreement with the James W. Brown Company of Pawtucket, Rhode Island to produce it for them. These early cars had advanced features such torque tube drive and wheel steering.
During the first two years of production, the Cameron was sold by a separate corporation - the United Motors Company. As sales continued to climb, the Brown Company took over sales and advertising under their own name. In 1904, two- and three-cylinder cars were added to the lineup.
Several Cameron's were used in competition, including hill climbs and dirt track events. One example even captured a half-mile world record in Cincinnati, Ohio. Another example became the first air-cooled car to reach the top of Mount Washington without requiring a stop. In 1906, the Brown Company was sold to individuals not interested in automobile production. Left without a manufacturer, the Cameron Company relocated back to Brockton, Massachusetts. Cameron was able to secure financial backing in Massachusetts to form the Cameron Car Company. A short time later they introduced a revolutionary rear-mounted gearbox which would be used by Camerons throughout the remainder of their production lifespan. A four- and six-cylinder power-plant followed.By 1908, the Cameron Company was in need of additional funding and more manufacturing space. They found an adequate location in Beverly, Massachusetts at the former Upton factory. The following year, branched locations were established in New London Connecticut, Attica Ohio, and Alma Michigan. Six-cylinder cars were produced at the Connecticut location, trucks were built in Michigan, and Ohio was source for much of their financial backing. 600 Cameron vehicles were produced in 1911. Once again, feeling the need to expand, larger facilities were acquired and the New London, Beverly, Alma, and Attica plants were closed. Again, big manufacturing changes followed in 1913. Cameron packed up twenty freight car loads of machinery and moved to the old Methusek Piano plant in West Haven, Connecticut. The Cameron Manufacturing Company was incorporated in nearby Orange. The vehicle's that followed were now air-cooled, though still using the rear-mounted transmission.
For 1914, the Cameron Company had hefty goals which were cut-short due to World War I and a lack of financial backing. As a result, the company entered bankruptcy. Part of their multi-million dollar plant was leased to the Avis Gun Company. The remained of the plant was leased to the Euclid Motor Car Company (another venture in which Everett Cameron was involved.)
In 1916, the Cameron Company was resurrected in Norwalk, Connecticut. After a few prototypes were built, the company closed only to have another re-birth in 1919 in yet another factory in Stamford. The new vehicles from this facility were air cooled and powered by a new engine. A few cars were built, though the principal business from this venture was the manufacture of front-wheel-drive farm tractors also called the Cameron. Production of the Cameron car was short-lived, and was discontinued in 1920. Forrest F. Cameron moved to Cleveland and made an attempt at creating another Cameron. Everett S. Cameron went in another direction, designing and manufacturing aviation and marine engines. Everett would continue to design until the 1950s. He was given an honorary membership in the Antique Automobile Club of America and the Horseless Carriage Club in the 1950s.
By Daniel Vaughan | Jun 2013

New Generation Of Ford Electrified Vehicles To Include Fiesta And Focus Ecoboost Hybrid, Ford To Reveal At 'Go Further' 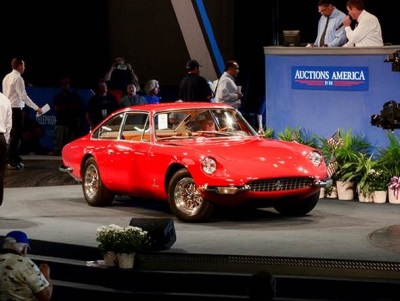 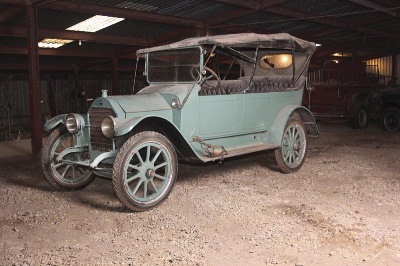 Auburn, IN. December 10th, 2014. Worldwide Auctioneers announced today that a remarkable and long concealed assortment of pre-war, brass era and steam-powered motorcars from the Sawyers Sandhills...

PEBBLE BEACH, Calif. (February 20, 2014) -- Maserati, a marque renowned for its racing greats as well as road cars offering both elegance and sporting performance, takes center stage at the 64th...
© 1998-2020. All rights reserved. The material may not be published, broadcast, rewritten, or redistributed.