•The 2014 Ford Taurus SHO sedan is the sportiest model yet to wear the SHO badge, offering unique, performance-inspired design and road manners to match
•New for 2014 is the Lane-Keeping System, which alerts and assists the driver when the car is drifting out of its lane
•Improved driving dynamics, larger brakes, torque vectoring control and specially calibrated electric power-assisted steering (EPAS) deliver superior performance

The 2014 Ford Taurus SHO is the sportiest Taurus yet, blending a fuel-efficient EcoBoost® engine, enhanced driving dynamics and performance-inspired design with smart technology such as the newly available Lane-Keeping System.

For Taurus SHO, subtle differentiation from other members of the Taurus family starts up front, with a performance-inspired grille in black mesh – unique to SHO – flanked by series-specific high-intensity discharge headlamps. Behind the front wheel openings, a fender-mounted scallop contains a subtle SHO badge.

Signature Ford technology is a key attribute of the new Taurus SHO, with the addition of standard MyFord Touch® driver connect technology powered by SYNC® and the replacement of several traditional knobs and controls with clear, colorful LCD screens and five-way buttons. The screens can be personalized to display information relevant to each individual driver using voice command, a simple button click or touch-screen tap.

New for 2014 is the Lane-Keeping System, which uses a digital camera mounted on the windshield ahead of the rearview mirror, allowing the Taurus SHO to watch the road ahead to detect an unintentional lane departure. The Ford Lane-Keeping System has three levels of assistance available to the driver depending on what is happening – Lane-Keeping Alert, Lane-Keeping Aid and Driver Alert.

Vital Stats
Engine : 3.5 L., 6-cylinder
Power: 365 hp
Torque: 350 ft-lbs
6-speed Automatic
The driver must turn on the Lane-Keeping System. Once the vehicle speed is above 40 mph and lane markers are clearly visible on the road, an icon that looks like a car between two lanes lights up green in the instrument cluster to indicate the system has been enabled. Ford's Lane-Keeping System takes advantage of the electric power-assisted steering (EPAS) to provide a vibrating alert to the driver and then gently steer the car back into the lane if the driver doesn't respond.

When the system detects the car is approaching the edge of the lane without a turn signal activated, the lane marker in the icon turns yellow and the steering wheel vibrates to simulate driving over rumble strips. If the driver doesn't respond and continues to drift, the lane icon turns red and EPAS will nudge the steering and the vehicle back toward the center of the lane. If the car continues to drift the vibration is added again, along with the nudge. The driver can overcome assistance and vibration at any time by turning the steering wheel, accelerating or braking.

The Taurus SHO drivetrain continues to use the award-winning and fuel-efficient 3.5-liter EcoBoost V6 engine, delivering 365 horsepower and 350 lb.-ft. of torque, mated to a six-speed high-capacity 6F55 SelectShift® automatic transmission. (posted on conceptcarz.com)

Steering wheel-mounted paddle shifters enable Taurus SHO to match revs for smooth, quick, manually selected downshifts. For the new model, these have been reconfigured for more intuitive operation, with one paddle for upshifts and the other for downshifts.

SHO dynamics have been enhanced with larger brakes, torque vectoring control – using slight braking to provide the effect of a limited-slip differential – and unique sport-tuned suspension.

The 2014 Ford Taurus SHO will be produced at Ford's Chicago Assembly Plant.Source - Ford 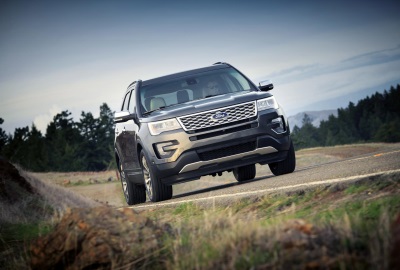