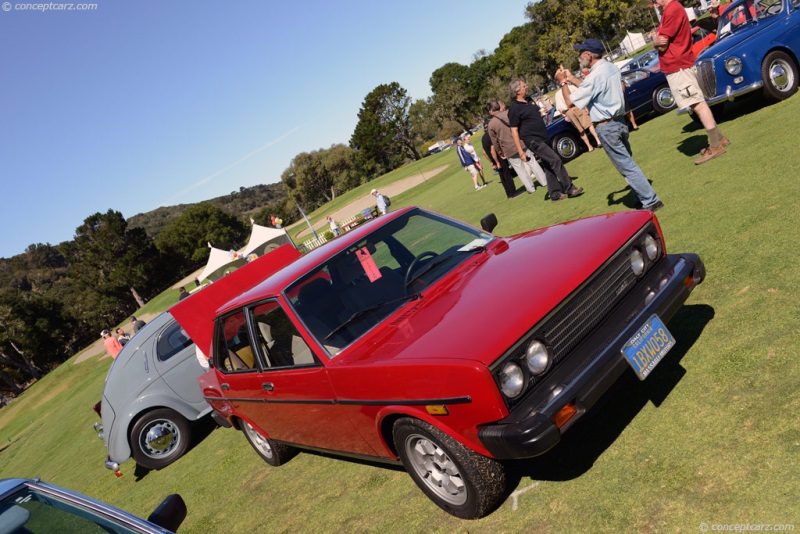 The Fiat 131, introduced at the 1974 Turin Motor Show, was produced from 1974 to 1984. It was a replacement for the Fiat 124 and was available as a two-door and four-door saloon and 5-door estate. Initially, the 131 was powered by 1.3 L and 1.6 L single overhead camshaft engines. In 1978 and 1981, revisions were made. In total, 1,513,800 units were produced in Italy.The Fiat 131 featured a steel monocoque, designed and styled on the typical three-box design. The boxes were designed for the engine compartment, passenger compartment, and boot. It had a front engine, rear-wheel drive layout. The engine was longitudinally mounted in the front and the gearbox was placed directly behind the engine. The power was sent to the solid live rear axle vehicle a tubular propeller shaft, under the transmission 'tunnel.' The brakes in the front were discs, using a solid iron disc and a single-piston sliding caliper. In the back were drums, with leading and trailing shoe design operated by a dual piston fixed slave cylinder. They were hydraulically operated with a tandem master cylinder assisted by a vacuum servo using two separate circuits.
The first series of the Fiat 131 were produced until 1977 when they were replaced with the Series 2. They were given a minor facelift along with new DOHC, or 'twin cam' engines. The most visible difference between S1 and S2 cars were larger rectangular shaped front lights (quad round headlights in the United States), new bumpers, new bigger rear lights and new interior trim.
The Series 2 was sold in the United States as the Fiat Brava from mid-year 1978.
By Daniel Vaughan | Jan 2013