The new Porsche LMP1 sports prototype, which will compete in the sports car World Endurance Championship (WEC) and in the 24 Hours of Le Mans from 2014, successfully completed its first rollout today on the Porsche test track in Weissach. Before the eyes of the entire Board of Porsche AG, Porsche works driver Timo Bernhard took his new 'wheels' through its initial function check.

The LMP1 racer turned its first laps on the circuit several weeks earlier than originally planned. 'We are well on schedule,' says Fritz Enzinger, Head of LMP1. 'Our newly formed team has worked with utmost concentration on getting this highly complex vehicle on the track as soon as possible. This allows us a few additional weeks for more testing and further development. From 2014, the regulations are primarily based on efficiency. This makes the competition amongst engineers more interesting and presents us with completely new challenges.'

Since the decision in mid-2011 to return with the LMP1 racer to top motorsport as a works effort, the Motorsport Centre at Weissach has grown significantly. A workshop and an administration building were built and accommodate around 200 employees who are responsible for the design, assembly and deployment of the LMP1 car. From the 2014 season, the racer will be fielded by a Weissach-based works squad.

'I was involved in the development of the new car right from the outset,' says Porsche works driver Timo Bernhard. 'I'm very proud that I was the one to take our baby through its first paces today. Already now the car feels great. I look forward to testing the vehicle in the coming weeks and months with my friend and colleague Romain Dumas.' Bernhard (32) and Dumas (35) are the first two regular drivers in the LMP1 project and will carry out the majority of testing on various international circuits.

'During the development of our new LMP1 vehicle, we faced the same challenge as in the series production development of our road legal cars,' says Wolfgang Hatz, Board Member for Research and Development at Porsche AG. 'Our aim was to achieve the best possible efficiency without compromising performance.'

Matthias Müller, Chairman of the Executive Board at Porsche AG, particularly emphasises the benefits customers will enjoy from the development of the high-tech race car. 'The engineers were able to start with a blank sheet of paper in the design of the new LMP1 car that was out here today on the Weissach race track for the first time. Hence, they were able to apply many new technologies within the framework of the regulations that will also benefit the customers of our road legal automobiles in the future. After all, there's a race car in every Porsche.'
Source - Porsche

Atlanta. At the Geneva International Motor Show, the new Porsche 919 Hybrid is celebrating its world premiere for the top class of the 2014 World Endurance Championship (WEC). The hybrid prototype will be joined by the Porsche 911 RSR at the Porsche exhibition in Geneva as well as at all eight races of the WEC, whose season highlight will be the 24 hours of Le Mans. Also at Geneva, the 911 Targa is making its European debut.

Matthias Müller, Chairman of Porsche AG: 'Crucial in the development of the Le Mans prototype were the newly created and revolutionary racing rules for this class as they relate to energy efficiency. In 2014, it will not be the fastest car that wins the World Endurance Championship series and the 24 hours of Le Mans, rather it will be the car that goes the furthest with a defined amount of energy. And it is precisely this challenge that carmakers must overcome. The 919 Hybrid is our fastest mobile research laboratory and the most complex race car that Porsche has ever built.'

The high efficiency of the Porsche 919 Hybrid is the result of a balanced overall concept. From the combustion engine to the energy recovery systems, suspension and chassis, aerodynamics and driver ergonomics, the sum of the components form an incredibly efficient unit for maximum performance. The drive system is based on a 4- cylinder gasoline engine that is compact and lightweight. The 2.0 liter V-engine is a structural component of the chassis, and reaches a maximum engine speed of approximately 9,000 rpm. It features direct injection, a single turbocharger and thermodynamic recovery capabilities. The compact unit outputs around 500 hp.

Two different energy recovery systems harness energy to replenish the batteries and provide power. The first system is the innovative recovery of thermal energy by an electric generator powered by exhaust gases. The second hybrid system is a motor on the front axle utilizing brake recuperation to convert kinetic energy into electric energy. The electric energy is then stored in water-cooled lithium-ion battery packs and when the driver needs the stored power, the front motor drives the two front wheels through a differential during acceleration. This gives the Porsche 919 Hybrid a temporary all-wheel drive system, because the gasoline engine directs power to the rear wheels, just like the 918 Spyder.

A new Porsche team of over 200 employees was formed to develop and implement the development center in Weissach. Friedrich Enzinger, Head of LMP1: 'Within two and one half years we built the infrastructure, assembled our team and put this highly complex race car on wheels. We have the greatest respect for the lead our competitors have in racing experience. Our objective in the first year is simple: to finish races and be competitive.'

'Intelligent Performance' is written in bold letters on both the 919 Hybrid and 911 RSR. The seventh generation of the 911 has consistently benefited directly from motorsport developments. The rear wheel drive 911 RSR features a lightweight design and refined aerodynamics for better lap times and better fuel efficiency.

Vital Stats
Engine : 2.0 L.
In its first appearance at the 2013 24 Hours of Le Mans the Porsche 911 RSR placed first and second in the GT-Class. The GT racer from Weissach has been further improved in many aspects for 2014 and it started the 2014 season with a class victory at the Rolex 24 At Daytona. The 911 RSR is raced in the new TÚDOR Únited Sports Car Championship as well as being part of the WEC World Sportscar Championship series, including the 24 Hours of Le Mans. The second Porsche factory team, Porsche Team Manthey, will compete with two 911 RSR race cars in WEC which begins in April. Drivers Jörg Bergmeister (Germany), Marco Holzer (Germany), Frédéric Makowiecki (France) and Patrick Pilet (France) will compete in seven world championship events with each event being six hour endurance race. Richard Lietz (Austria) and Nick Tandy (Great Britain) will join them for the marathon in Le Mans.

Hartmut Kristen, Head of Motorsports, and responsible for Porsche GT Motorsport and all customer sport programs, explains 'Porsche is kicking off 2014 with the most extensive motorsport program in the company's history: We have a total of 20 factory drivers now. Along with the factory teams in the WEC, there are two more factory 911 race cars that are being used by the Porsche Cars North America team in the new Tudor Únited Sports Car Championship series.' Kristen adds: 'We have also put the RSR in the hands of customer teams for the first time.'

This year, Patrick Dempsey of Team Dempsey Racing Proton will be racing in the 24 Hours of Le Mans for the third time.Source - Porsche 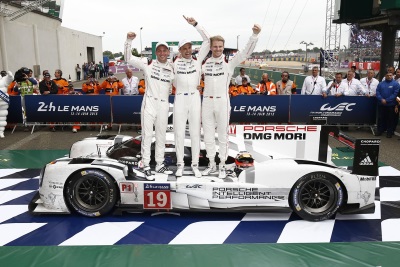 ONE-TWO FOR THE PORSCHE 919 HYBRIDS IN LE MANS 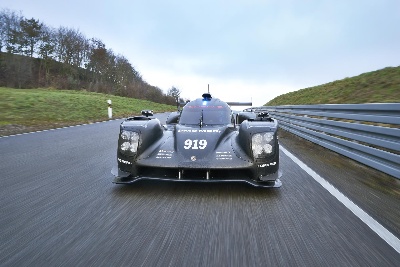 Atlanta. Following its initial victory at the 2014 seasons final race in Brazil, more podium finishes are the goal for the future for the Porsche 919 Hybrid in the 2015 FIA World Endurance Championship... 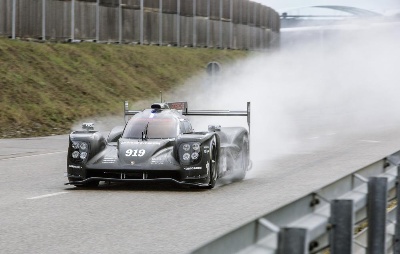 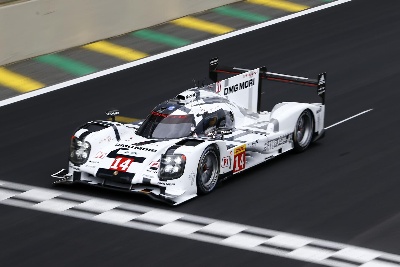 THE WAY TO THE FIRST VICTORY FOR THE PORSCHE 919 HYBRID 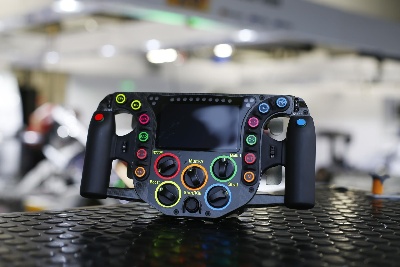 FIA World Endurance Championship, LMP1 Technology Stuttgart. Setting the direction is the most trivial task of the steering wheel in the Porsche 919 Hybrid. The drivers of the Class 1 Le... 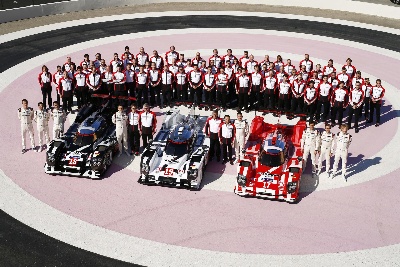 2015 Porsche 919 Hybrid – proven base was extensively optimised Suttgart. At the Paul Ricard Circuit in France today, Porsche presented the second generation of its Le Mans Prototype 91... 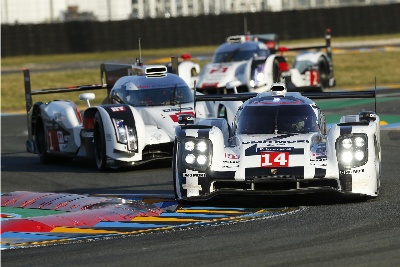 Le Mans. After a strong performance by both Porsche 919 Hybrids, the Porsche Team was left empty-handed after a dramatic final stage of the race. Following more than 22 hours, car No. 20 driven... 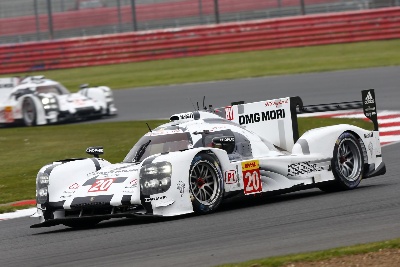 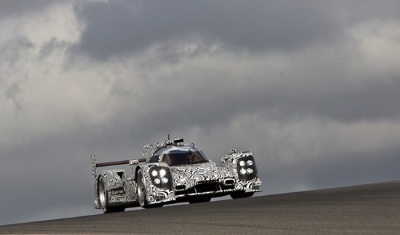 StuttgartAtlanta. Porsche enters the 2014 World Endurance Championship (WEC) and the 24 Hours of Le Mans with four factory cars. Today the Le Mans organizer, the Automobile Club de lOuest...
© 1998-2020. All rights reserved. The material may not be published, broadcast, rewritten, or redistributed.