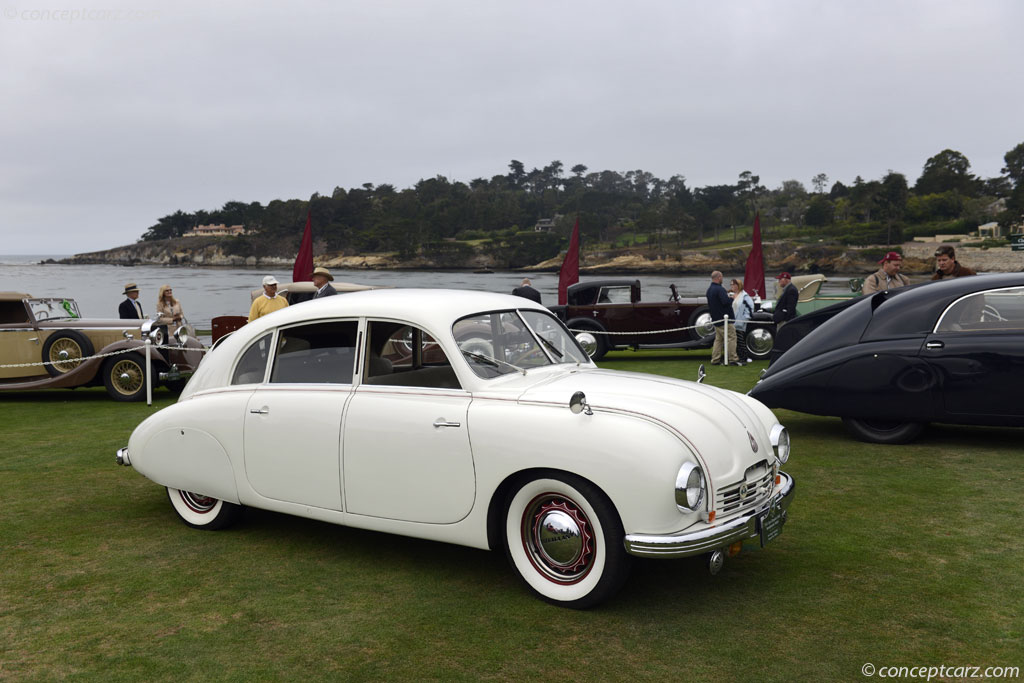 Aerodynamic Saloon
In late 1947 a new, smaller Tatra model was shown at the Prague Auto Show. Described as 'the car of tomorrow - here today,' the new Tatraplan T600s sold for just $1,450 in Germany, which resulted in a number of sales to US servicemen. This example was secretly exported under cover of darkness from a US Air Force base in West Germany by one such officer in the back of a military transport plane in 1953. With a 1,950cc engine developing just 52 horsepower the Tatraplan wasn't one of 1951's hottest performers. Acceleration from zero-to-sixty takes 32 seconds but its top speed is a respectable 85 mph. The Tatraplan is, however, very quiet, and wind noise is almost nonexistent, which makes for very relaxed motoring.
The Tatra Motor Company of Koprivnice, Czech Republic, was founded in 1850 as Schustala & Company, later renamed Nesselsdorfer Wagenbau-Fabriksgesellschaft when it became a wagon and carriage manufacturer. Tatra produced their first motor car in 1897 and in 1918 they changed their name to Kopřivnická vozovka a.s., and in 1919 started to use the Tatra badge named after the nearby Tatra mountains in Slovakia.Only Daimler and Peugeot can claim to have produced vehicles prior to Tatra, making Tatra the third oldest car maker in the world. Tatra would continue to produce passenger cars until 1999, but the company still produced a range of primarily all-wheel drive trucks.During the 1930s, the company built advanced, streamlined cars after obtaining licenses from Paul Jaray, which started in 1934 with the Tatra T77, the world's first production aerodynamic car. Power was from an air-cooled, rear-mounted V8 engine which was very sophisticated and technically advanced for its era.
The Tatra T97 was introduced in 1936 and remained in production until 1939, with 508 examples produced. They were a smaller alternative to the larger T87 model. The larger Tatra's had V8 power while the T97 was equipped with a 1.8-liter flat four-cylinder unit offering 40 horsepower. They had a rigid backbone chassis, an independent suspension setup, and hydraulic drum brakes. Instead of three headlights, the T97 had two, along with a single-piece windscreen, and a smaller body.
Following aerodynamic aircraft design principles and with the help of Zeppelin designer Paul Jaray, the Tatra T97 had a short front end which followed rearward, with a curved roofline and a long, and sloping fastback tail. There were integrated fenders, a full undertray, and a rear dorsal fin. When World War II came to a close, Tatra resumed building passenger cars in addition to commercial (and military) vehicles. In 1946, the factory was nationalized two years before the communist takeover. Production of pre-war models continued, however, a new model, the Tatra 600 Tatraplane was introduced, wearing a design created by Josef Chalupa, Vladimír Popelář, František Kardaus and Hans Ledwinka. The T600 Tatraplane name celebrated the new Communist planned economy and referred to aeroplane inspiration ('éroplan' means aeroplane in colloquial Czech).The Tatra 600 went into production in 1948. It had a monocoque streamlined saloon body and a drag coefficient of just 0.32. Power was from an air-cooled, falt-4 cylinder engine displacing 1952cc. During its production which continued until 1952, a total of 6,342 examples were made.
By Daniel Vaughan | Sep 2014