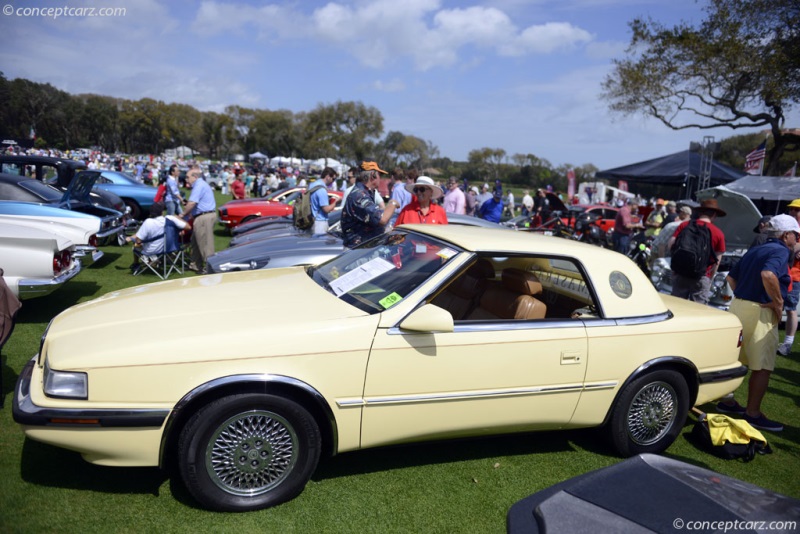 The 1980's were not kind to Maserati. After Alejandro De Tomaso took over the company in 1975, plans were made to turn Maserati into a much higher volume car producer. The vehicle with which the company planned to achieve this mass production was the Biturbo, an unfortunate blend of tricky road manners and mediocre build quality. The Biturbo had its merits, of course, and was a very capable car in the right hands. Over the years, Maserati even managed to work most of the gremlins out of its system. It never caught on in the United States, though, and Maserati faced sales so pitiful that they were forced to pull out of the U.S. market entirely. Chrysler, too, saw struggles in the 1980's. Fortunately for that company, though, chairman Lee Iacocca was able to bring stability back by the middle of that turbulent decade.
Financial stability aside, Chrysler was no impressive car company during the Reagan years. Its product offerings, sad and impossibly boring, could do little to excite a public already ravaged by automotive mediocrity. Lee Iacocca saw that something must be done to reinvigorate the Chrysler nameplate, so he contacted his friend Alejandro De Tomaso over at Maserati. Together, they formulated a plan to bolster Chrysler's sagging image and aid Maserati's depressed financial situation.
The product of this collaboration, unconventionally named Chrysler TC by Maserati, was introduced in 1988 to an audience that, well, didn't really care. Who could blame them? Delays in production meant that, though the production model was remarkably similar to the prototype, the TC was dated by the time it reached the street.
Its looks were inoffensive, but they were tame to the point of anonymity. Chrysler was in charge of exterior design, and this fact allowed the vehicle's K-car roots to show a little too clearly in the TC's design language. Maserati tackled the interior design, but the car used a standard Chrysler console and instrument binnacle. Maserati did what they could with the little freedom they had, but sexy door panels were hardly enough to save a dull, dated interior. Supple leather and wood accents lent an upscale ambiance to the interior upon first impression, but the subpar build quality quickly erased any notion that the TC was manufactured with the care befitting an exotic. The 5-speed TC's performance, at least, was respectable. A transversely mounted, 16-valve, 2.2L four delivered power to the front wheels. Engineered by Maserati, this turbocharged and intercooled engine was good for 200hp, 220lb-ft of torque, and an impressive 0-60 time of 6.9 seconds. The automatic, car, though, couldn't touch this kind of performance. Its uninspiring 3-speed was coupled to either a Chrysler-engineered 2.2L turbo four with 174hp or a later 3.0L Mitsubishi V6. On auto-equipped cars, 0-60 times grew to 9.9 seconds and performance levels sank far from sports car standards. Poor marketing cemented the TC's fate. Clueless salespeople had trouble moving the cars, and its delayed introduction caused more problems than dated styling. The Chrysler LeBaron, sharing styling cues with the TC, was intended to come after the Chrysler-Maser. Under this plan, the LeBaron would have benefitted from the halo of the TC's prestige. The LeBaron reached production first, though, and the TC came out looking like a strange afterthought. At double the cost of a LeBaron convertible, few people saw the point of the TC. Only 7300 were sold, and production ended in 1990 after a run of cars was built for the 1991 model year. Fine interior appointments and the availability of capable performance were not enough to save the car, and neither Chrysler nor Maserati benefitted to any significant degree from the car's production. The trident inscribed within a Mopar pentagon would never be seen again. Sources:
Lyons, Stephen. 'Chrysler's TC by Maserati.' Allpar.com 10 Apr 2009. http://www.allpar.com/model/tc.html.
Vance, Bill. 'Motoring Memories: Chrysler TC by Maserati, 1988-1990.' Canadian Driver 03 Apr 2009 10 Apr 2009. http://www.canadiandriver.com/2009/04/03/motoring-memories-chrysler-tc-by-maserati-1988-1990.htm.By Evan Acuña